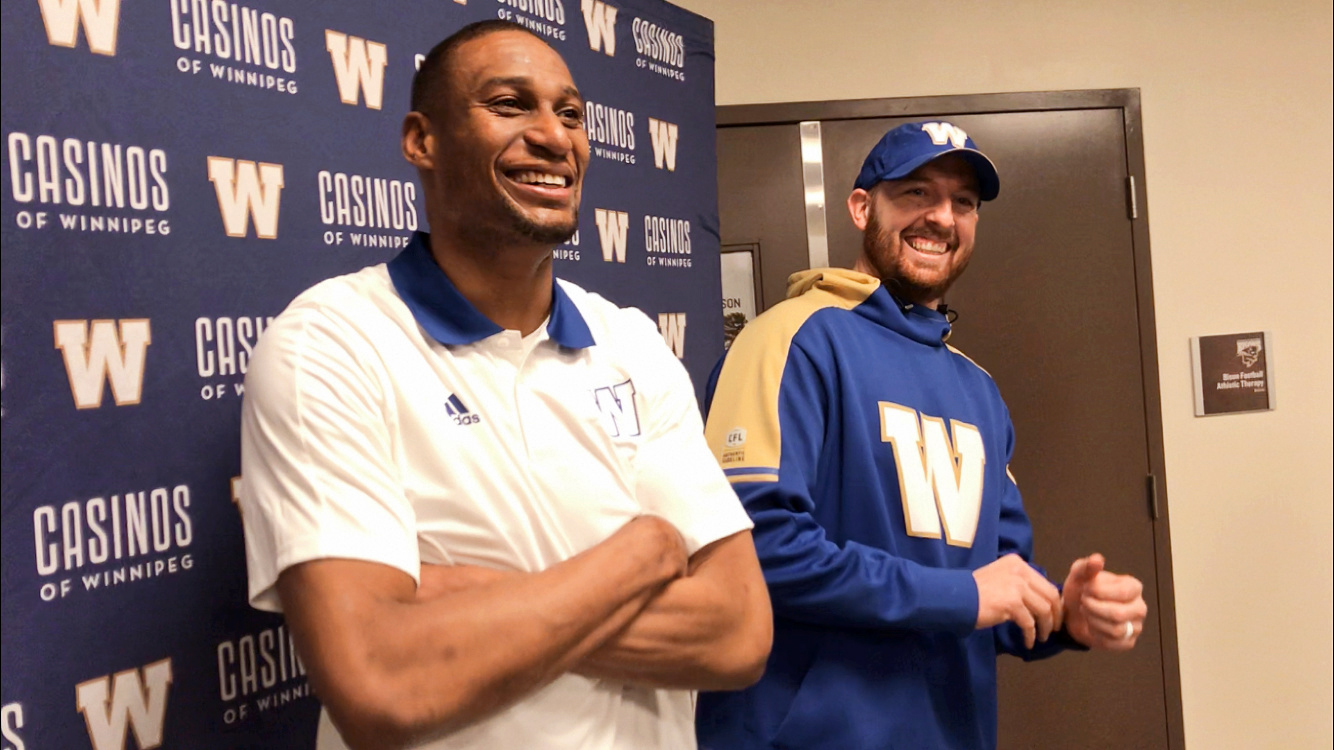 He was cut from a place he had called home for seven years hours before being due a hefty six-figure bonus.

He has a new football address – not initially by his choice – just a year removed from leading the Canadian Football League in receiving while being named to the all-star team as a member of the Edmonton Eskimos.

So, there were a couple of natural questions after watching Adarius Bowman laugh, grin and pass around handshakes and hugs like he was at a family reunion on Friday.

Why is this man smiling? And why Winnipeg?

“Why not Winnipeg?” began Bowman Friday afternoon in a press conference heralding his return to the Blue Bombers. “It was very simple to me: great group of guys, explosive offence, great defence… a team that I see is going to compete for the Grey Cup.

“When you’re in a position where you can actually choose, why not go to where it feels like home to you and where you feel like you’ll be excited with the locker room? It was a simple choice for me.” 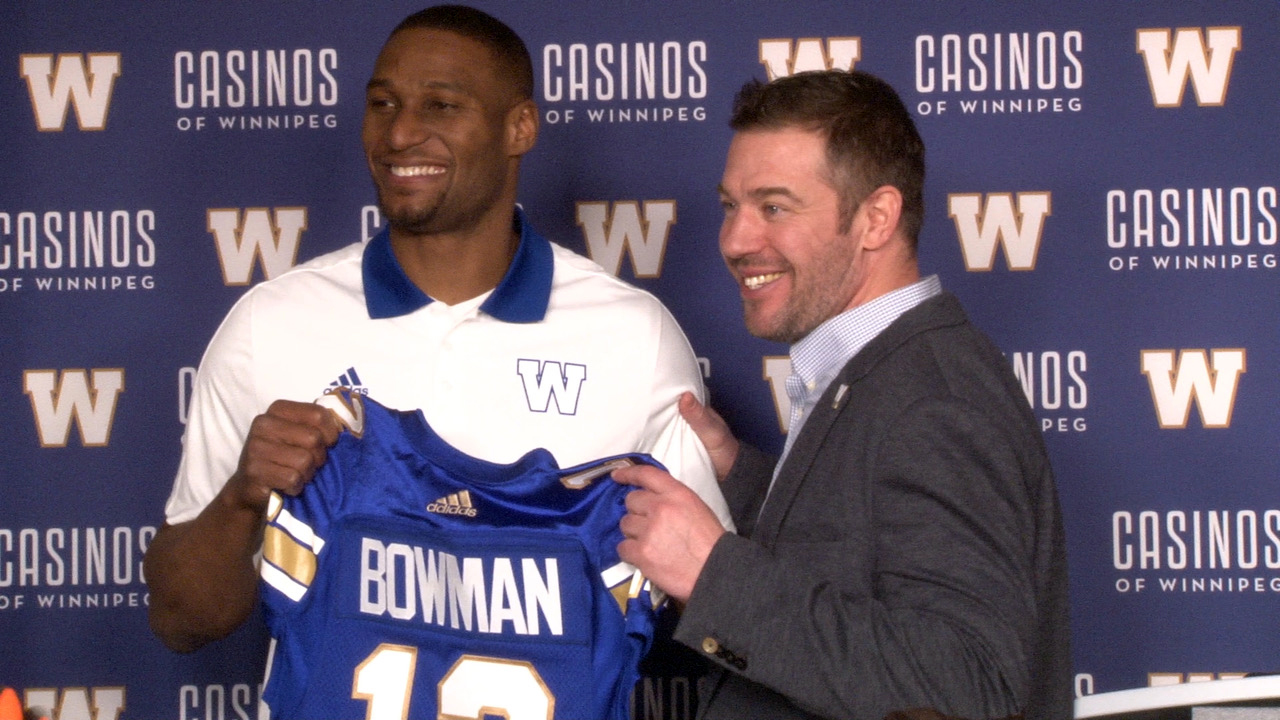 The Bombers landed the 32-year-old receiver in what had become a Bowman sweepstakes over the last few days – Saskatchewan, Toronto, Montreal and B.C. were all interested, and the Eskimos had pitched a return at a reduced salary – not because of the dollars they piled up (the Roughriders offer was reportedly higher), but because of a few other factors.

Bowman is reunited with former Roughrider teammate Weston Dressler and coach Paul LaPolice, whom he worked with both here and in Regina, but also rejoins ex-Eskimos quarterback Matt Nichols.

All those things made a return to Winnipeg – he landed here via trade in 2009 and was cut in 2011 before recreating himself in Edmonton – his No. 1 choice.

“Once I was free, I had a lot of interest from a bunch of people, but I kinda knew where my heart was at,” said Bowman. “I was looking at teams I would prefer to be with… I thought it was going to be a trade at first, but once I became free, it was simple for both parties to reach out to each other.

“I was in Edmonton for seven years. That’s seven years of friends, seven years of teammates, seven years of neighbours, seven years of working with kids in the community. You almost turn into family members. That was a part of my life and I have grown. I’ve had amazing people advising, amazing people helping me and giving me opportunities there. But it’s part of the business. It’s nothing personal. Edmonton is nothing but love. It was a decision they had to make. Am I upset about it? Not at all. Do I understand it? A little bit. But am I thankful to have this opportunity from Winnipeg? Yes. It’s onto this new chapter. It’s kind of like an old ‘new’ chapter, but it’s back to it and I love where I’m at right now. It was the best decision.”

The Bowman that will pull on his old No. 12 jersey this summer is vastly different than the one who exited here eight years ago, both on and off the field. In his 27 games as a Bomber in 2009-10, he pulled in 105 catches for 1,616 yards and nine TDs, playing with a revolving door of quarterbacks that included Michael Bishop, Stefan LeFors, Buck Pierce and Steven Jyles.

Bowman even went out of his way to apologize to Bomber fans for his work eight-nine years ago.

“I was a younger guy. I’ve grown up a lot,” he said. “The biggest thing (that’s changed) I would say is maturity, a better understanding and appreciation for the profession that we’ve got.

“The passion for the game is definitely a lot stronger than it was back when I was 21 and 22.”

His on-field production during his years in Edmonton speaks volumes. But what also shouldn’t be overlooked is the commitment he made there to the community. He won the Tom Pate Memorial Award last season – as voted on by the CFL Players’ Association for the player who ‘best exemplifies outstanding sportsmanship and someone who has significantly contributed to his team, his community and the Association’ – and was an Eskimo fan favourite.

What Bowman provides the Bomber offence is obvious: he’s a large (6-3, 217) big-play threat adept at pulling passes in traffic and could free up space for veteran receivers Darvin Adams and Weston Dressler while making it more difficult for defences to gameplan around stopping Andrew Harris.

All of that, in part, helps explain why Nichols was sporting a size-large smile on Friday.

“Having him around is unbelievable,” said Nichols.

“Everyone who just saw his press conference… that’s how Adarius is all the time. Always upbeat, a positive attitude guy. I mean, you can be having a basic conversation about nothing and be laughing the entire time, the way that he talks. It’s an infectious thing to have around the locker room.

“More than anything, he’s going to bring another dynamic to our team. He’s a huge threat, a big-bodied guy who can make unbelievable catches down the field. He can really boost our big-play potential and open up the other guys, doesn’t allow people to come into the box and stop Andrew… he just opens up so much for us.

“He’s going to be a great addition.”

Getting Bowman back in blue and gold also means he won’t be working against the Bombers defence any longer. Consider this: in 12 games against Winnipeg from 2011-2017, he had 61 catches for 820 yards and six TDs.

He’s also been particularly fond of playing at Investors Group Field, where he won a Grey Cup with the Esks in 2015 and pulled in two TD passes in last year’s Western Semi-Final.

Little wonder, it turns out.

“This might seem like a joke, but I was here for the ground-breaking of this stadium,” Bowman recalled. “I dug one of the first holes in the ground here. There’s a dose of that in me… even though I left and went away, I can never forget that.

“Every time I come here I say I’m at home. It’s not really an away game to me, it’s a homefield game to me. It’s in my heart.”