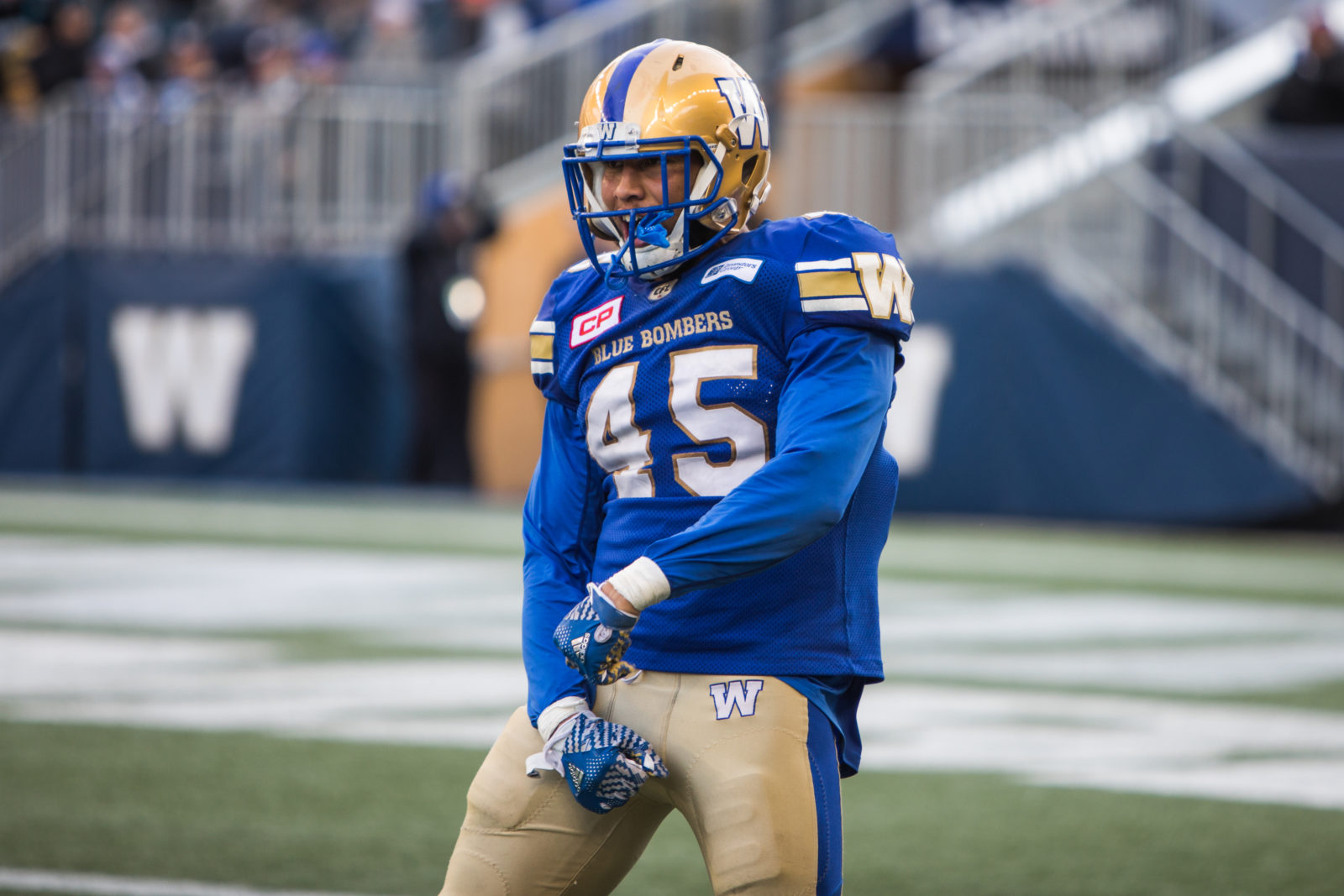 It would be more than a little melodramatic to suggest Jovan Santos-Knox was at a career crossroads when he stepped onto the football field at a Winnipeg Blue Bombers free agent camp in Charlotte, North Carolina last winter.

He had already attended a pro day at his alma mater, the University of Massachusetts, in front of NFL scouts and had also flashed his skills at a Calgary Stampeders camp in Florida. On the horizon was a workout with the Montreal Alouettes, the closest Canadian Football League team to his home in Middletown, Connecticut.

Still, when a football player is in limbo – as Santos-Knox was then – doors close more often than they open. And so when his father Byron came across some info about a Bombers’ camp in North Carolina, the idea to exhaust every opportunity out there was fuelled yet again.

“It was a pretty far drive for me… North Carolina is about nine hours from Connecticut,” began Santos-Knox in a chat with bluebombers.com. “But it was within driving range and my father said, ‘You want to go to it?’ So we got in the car and drove down.

“It ended up being one of the best drives and best decisions in my lifetime.” 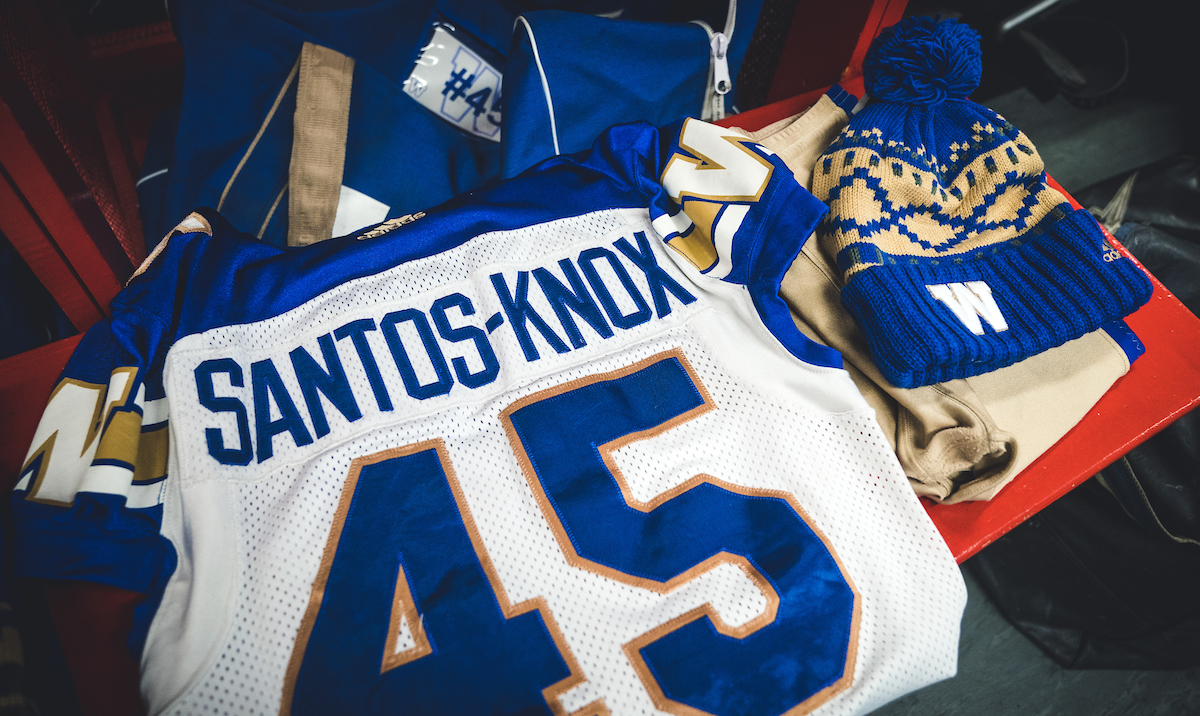 We outlined the what, where, when and why behind free agent camps earlier this week as CFL teams annually scour the map looking for the next Milt Stegall. But these camps are not just a search for greatness; they can be a lifeblood for franchises looking to simply give players a chance to shine – and push their incumbents – during training camp. The Bombers, for example, found defensive starters like Santos-Knox, Brian Walker and Brandon Alexander at free agent camps last winter, as well as former Saskatchewan Roughriders receiver Ryan Lankford, who attended one of the team’s free agent camps after being released in Regina.

A versatile linebacker who played both middle and weak side at UMass, Santos-Knox flashed enough at the Bombers camp in Charlotte to earn a training camp invitation. He first made an impression on special teams, was starting by midseason, and finished the year ranked second to Taylor Loffler in total defensive plays (tackles, special teams tackles, sacks, pressures, forced fumbles, interceptions, knockdowns and fumble recoveries) and will enter 2018 as a potential starter.

That transformation represents just some of the chapters in his evolution, and seems like light years from this time a year ago when he was just looking for his shot.

“I can remember that my father had spoken to Danny (McManus, the Bombers Assistant GM/Director of U.S. Scouting) before the camp and so he at least knew a little about me before I went down there,” Santos-Knox recalled. “I paid my $100 tryout fee, we warmed up, did a couple 40s, 5-10-5 (agility) shuttle, the broad jump and (three-cone) L drills. After they got our testing numbers, we went on to do individual drills.

“I had a really good day, I had some of my best times at any camp at the Winnipeg one.” 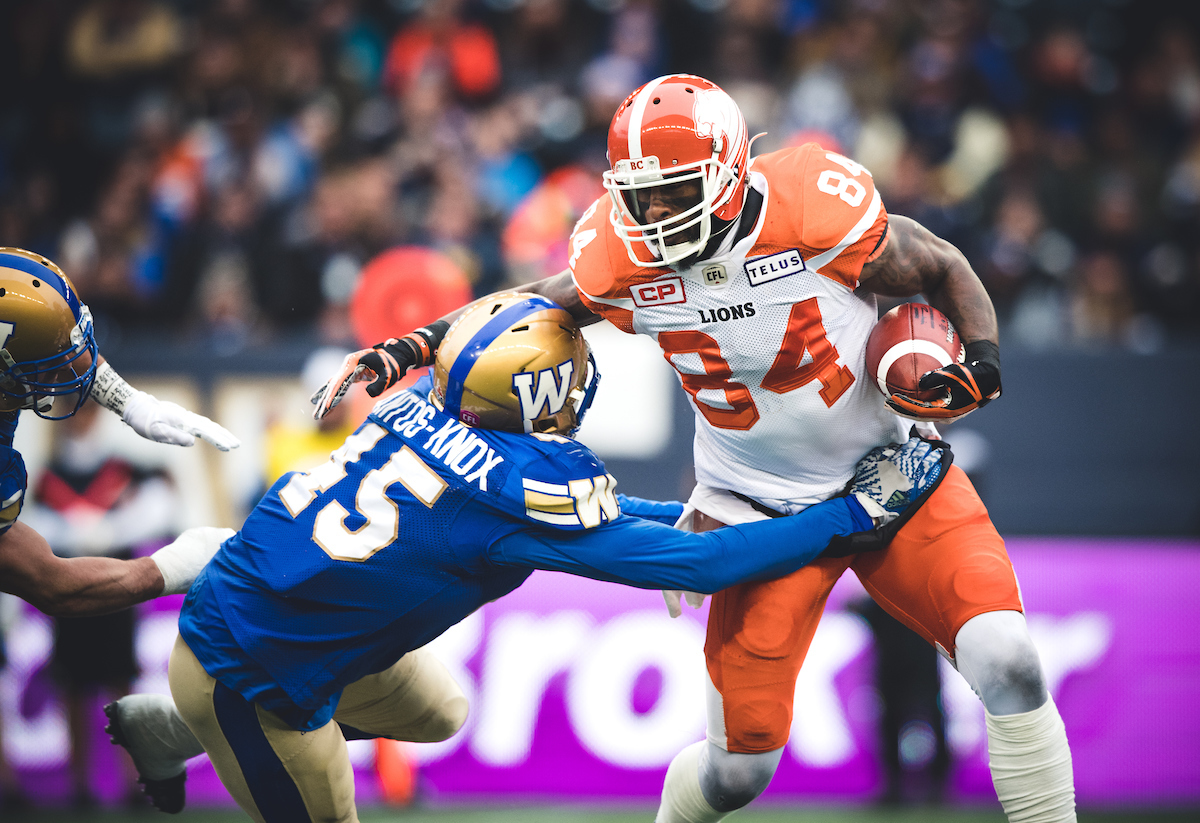 But there are no guarantees at these things and Santos-Knox had spied a lot of other talent among the 80-90 players he estimated were in Charlotte that day. He gave it his best shot, went back to work at a GNC supplement store in Middletown during the day while training at night, and began to prepare for his next possible camp. Again, it wasn’t a career crossroads, but his football future was still best represented by a string of question marks.

“There were a lot of guys in North Carolina that day,” said Santos-Knox. “I talked to Danny after the camp and he said they would be in contact with me. But honestly, afterward I didn’t think my opportunity would come with Winnipeg. I went to a Montreal camp and was excited to go to a camp that was closer to my home. I was waiting for Montreal, hoping they’d call back when Winnipeg hit me up. I didn’t know much about Winnipeg but they wanted me, wanted me to sign a contract. I did my research and next thing I knew I was out there.

“Never in a million years would I have thought Winnipeg would have been my destination, but it worked out tremendously. I love every part about being there and that city now.”

Funny how this game works sometimes – one moment Santos-Knox is making the nine-hour drive from Connecticut to North Carolina, the next he is starting games for the Blue Bombers in a CFL city he knew little about. And his family – his parents and two younger sisters – were spied at three Bomber home games this year and drove north to Montreal when Winnipeg visited. All of them, naturally, sporting his No. 45 jersey. 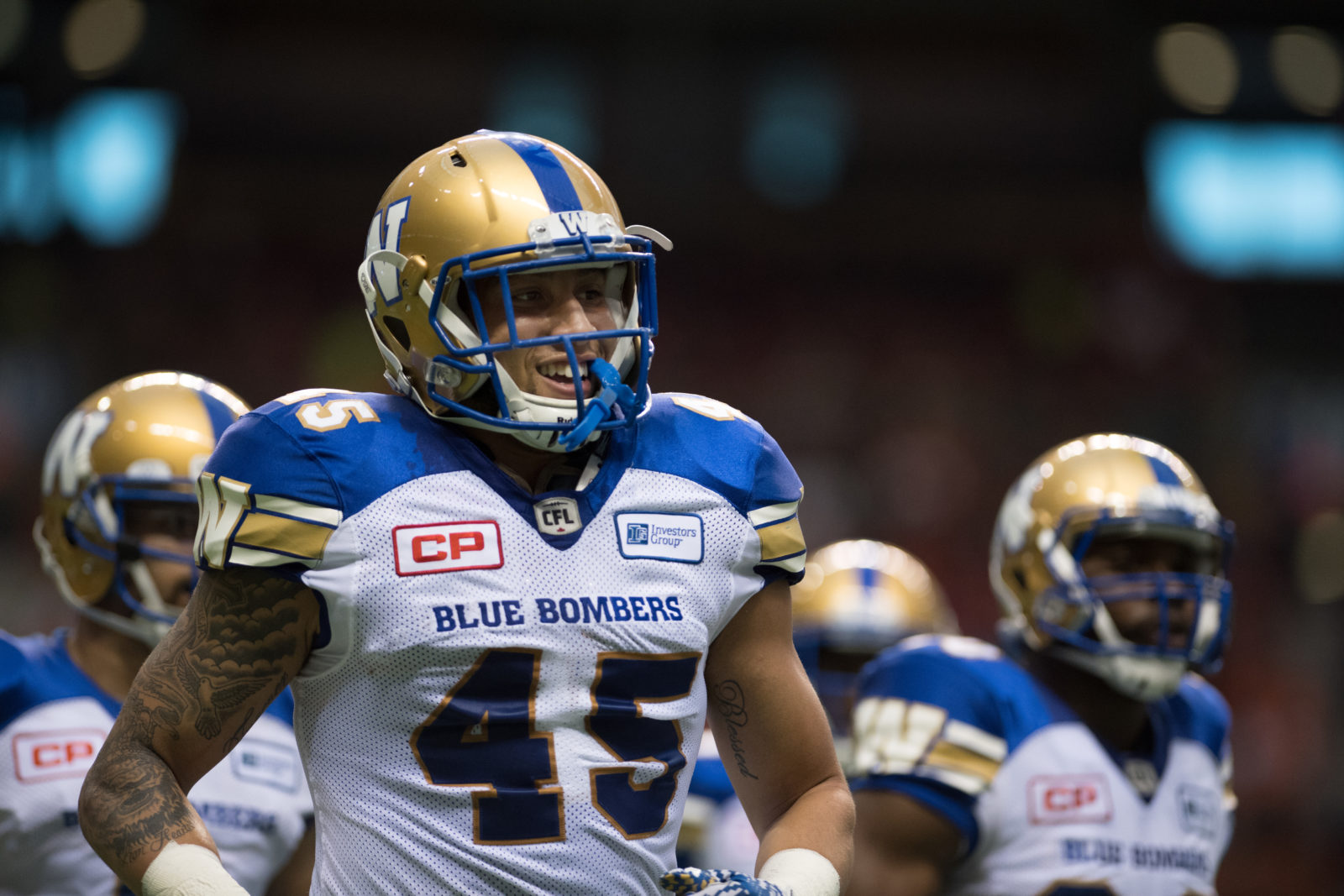 “They were hoping I would end up in Montreal because it was closer, but it couldn’t have worked out any better just because of the team and the organization,” said Santos-Knox. “It’s like a family out there and really a good place to be.

“I look back to that camp now and I was at a time when you wonder about hanging ‘em up and you don’t know whether you should keep chasing your dream and all that stuff. But Dad never had any doubts in his mind and just kept pushing me to chase it. You know what? Ultimately, it’s about competing. At these camps everybody is going to have their 40 times and whatnot, their numbers from drills. But at the end of the day, when you go one-on-one with somebody, that’s when the real competitor comes out.

“It’s about finishing strong and standing out in the one-on-one drills because that shows the kind of player you are when the pressure’s on and you’re going against an opponent. You should live for that. You don’t want to be the guy hiding at the back, you want to make sure you get as many reps possible.

“What’s funny is I know right now is a great time to reset the mind, build your body back up because the season does take a toll on you,” he added. “But, I’ll tell you, we have an indoor field here and I had the cleats on today and it was such a rush. I can’t lie – I can’t wait for training camp.”