Free Agency Check-In | One Month Out 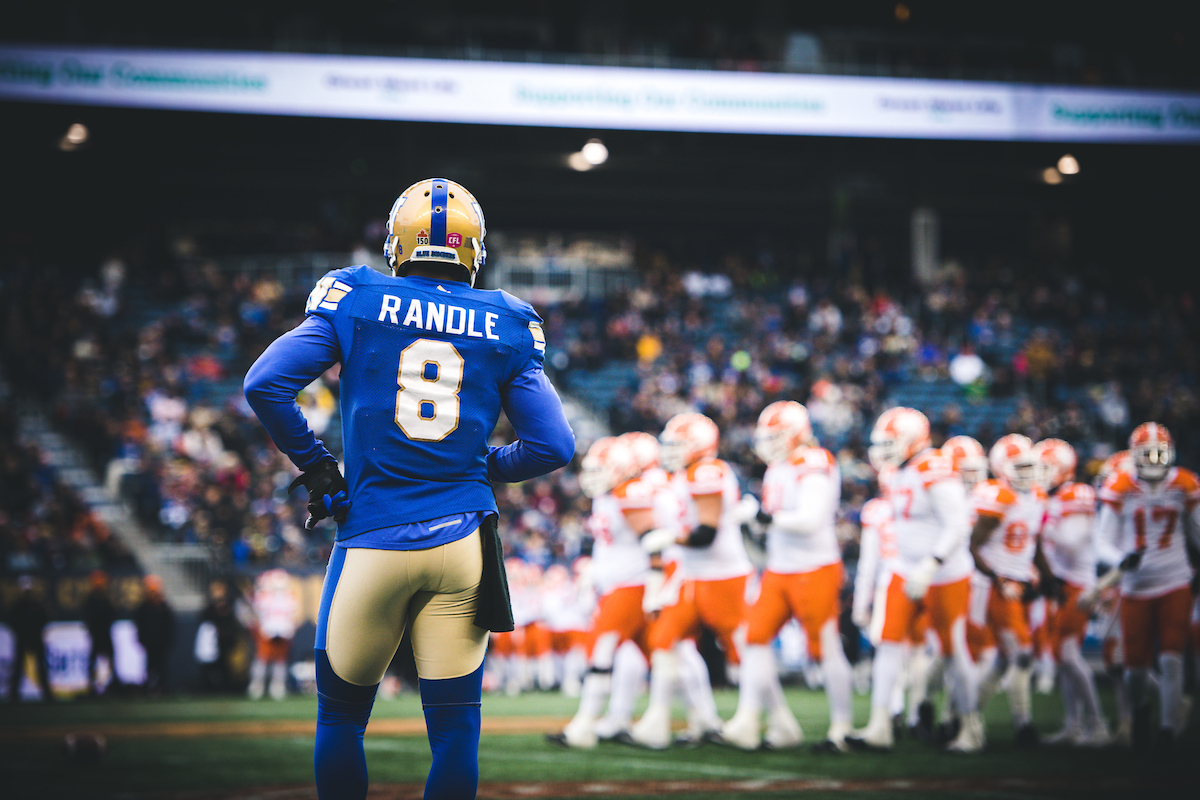 Free Agency Check-In | One Month Out

Chris Randle (8) of the Winnipeg Blue Bombers during the game against the BC Lions at Investors Group Field in Winnipeg, MB, on Saturday, Oct. 28, 2017. (Photo: Johany Jutras)

There’s often a panicky feel to the days leading up to Canadian Football League free agency, both from inside the inner sanctums of the nine franchises and from their loyal fan bases.

The move toward one-year contracts means the annual list of free agents is longer and more substantial than in years past, with talented players hitting the open market every winter.

And it means this is the time of year when finger nails get gnawed to the nub, when nerves are frayed, and when both pride and anger boil over during negotiations.

It’s no different here in Winnipeg with the Blue Bombers, as GM Kyle Walters hinted this week from CFL meetings in Banff; the challenge of keeping intact a talented squad that has gone 23-13 over the last two regular seasons is impossible while working under a salary cap that jumps only $50,000 this year. 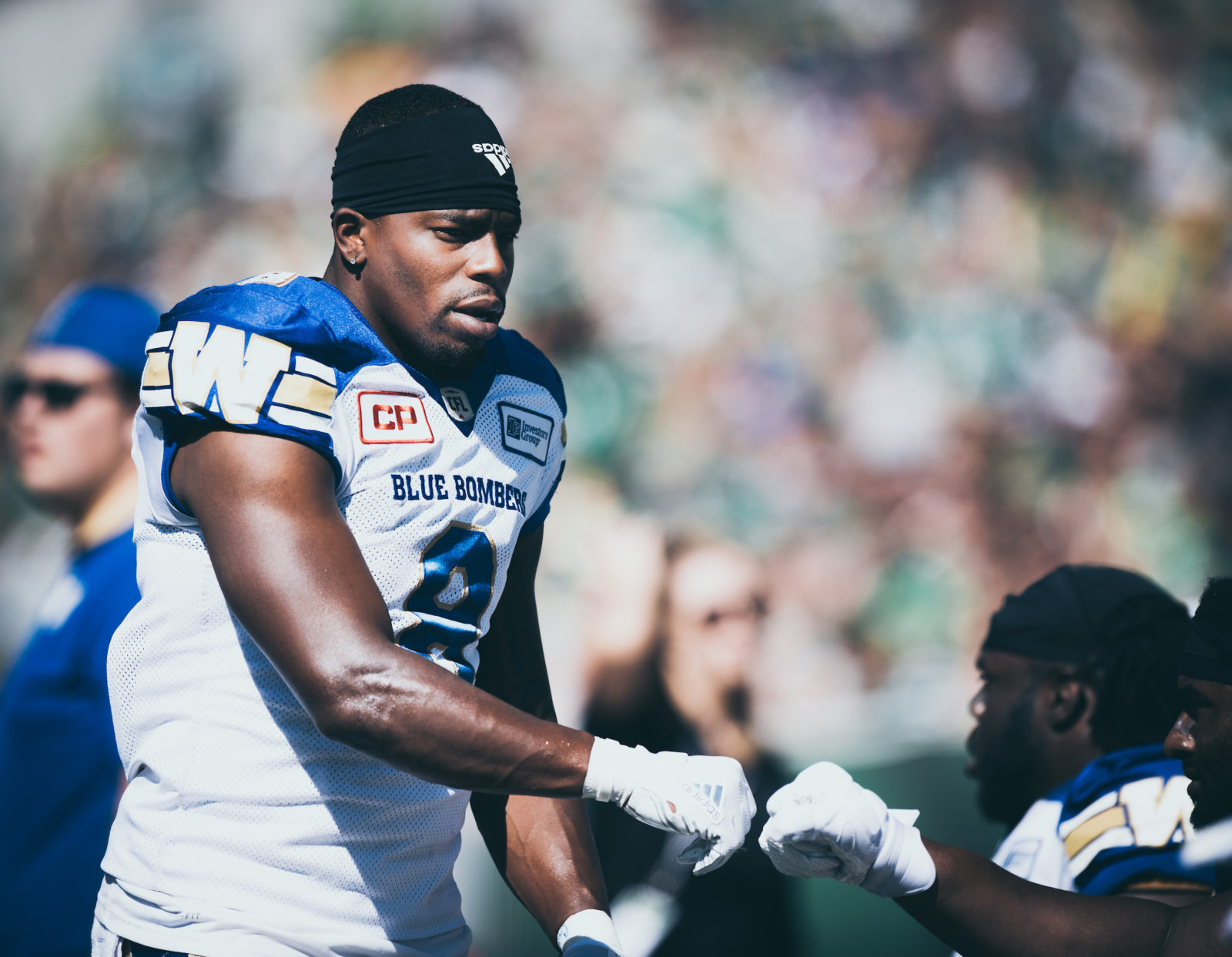 It’s the harsh business reality of this league, but it’s news that likely doesn’t make any of the 13 Bombers still unsigned all warm and fuzzy about possible returns in blue and gold.

All that said, the next few weeks are when GMs, agents and players really roll up their sleeves and hammer out deals in the days before the opening of free agency at 11 a.m. on February 13th.

Consider last year: In the month or so before free agency, CFL teams combined to lock up 52 potential free agents before the deadline with the Bombers inking Stanley Bryant, Dom Davis, Justin Medlock, Darvin Adams, and Matt Nichols in January, and Jesse Briggs the day before the market opened.

Walters said this week none of the remaining unsigned free agents have officially been told they will not be back in 2018. That said, not all of them will return and the Bombers GM plans to meet with head coach Mike O’Shea this week to discuss where negotiations stand with each player.

At the same time, the club has been studying the league-wide list of prospective free agents, making this an awkward time of year when teams are negotiating with their own talent while eyeing possible replacement soon to hit the market.

With that in mind, bluebombers.com looks at the 13 unsigned Bombers and what might be on the horizon just over a month out from the market opening…

Age: 29
His 2017: A sensational campaign in which he was named the Bombers’ Most Outstanding Defensive Player and named to the CFL All-Star team.
Synopsis: He’s a shutdown corner on a defence prone to giving up explosion plays. Will draw huge interest on the open market if he gets there.

Age: 30
His 2017: Also named to the CFL All-Star team. Worked well alongside Randle in the Bombers secondary. Ball-hawking halfback who has 12 interceptions in 34 CFL games.
Synopsis: Another stellar DB who deserves a raise and will garner interest if he’s free in mid-February.

Age: 31
His 2017: Cut short by his Achilles injury in October. Was finishing up the latest in a series of spectacular seasons.
Synopsis: The Achilles may be a red flag for some, but Leggett insists his recovery is ahead of schedule. A fan favourite brought to the CFL by the Bombers, he’s another who will be popular in free agency even with the questions about the injury and his age, because he’s dominant at the most difficult spot to play on defence. 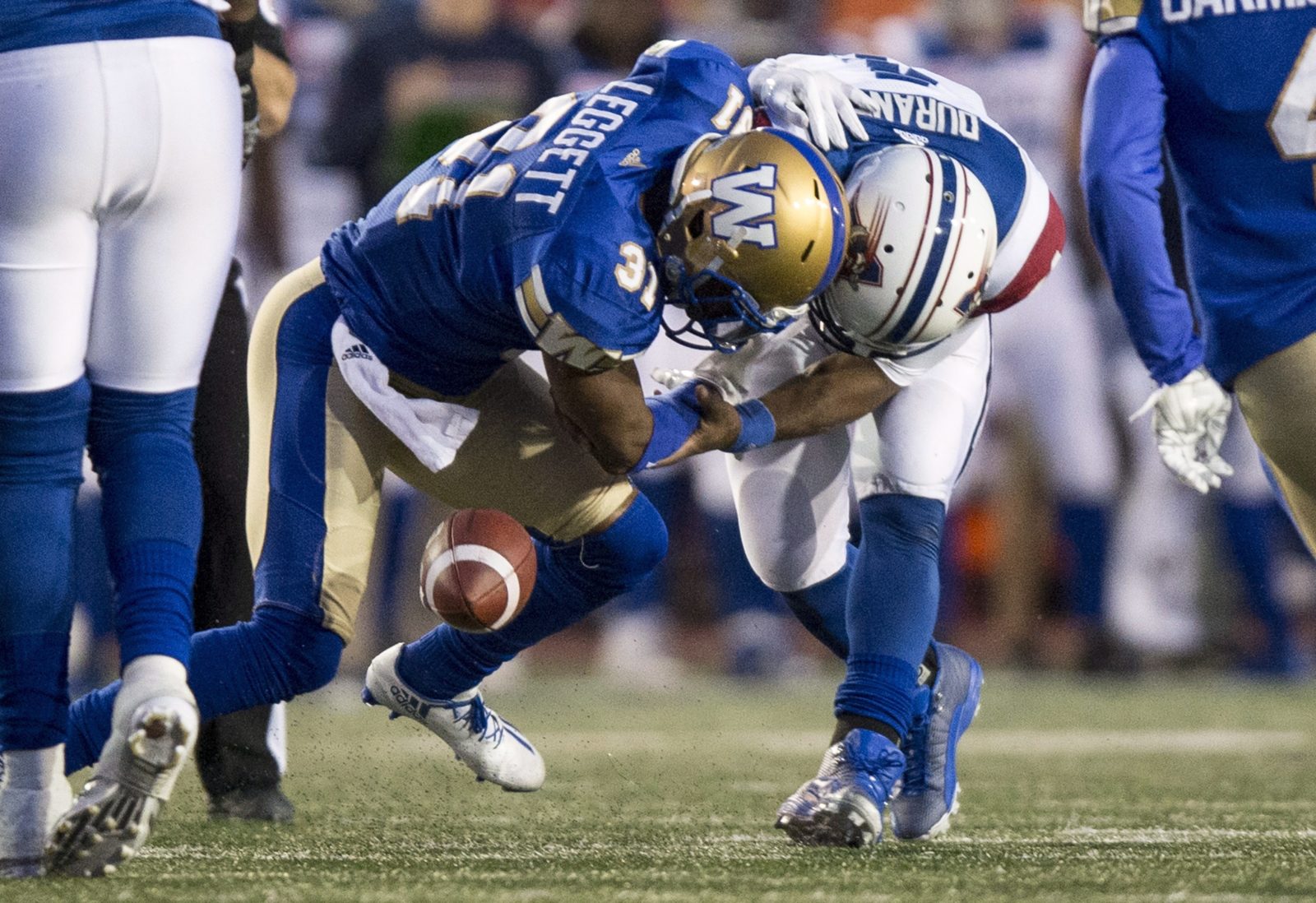 Age: 32
His 2017: Proved – again – that he is still productive by pulling in 58 catches for 608 yards and seven touchdowns. His numbers did drop down the stretch, with just seven catches for 57 yards and no TDs in his final five games.
Synopsis: The Bombers and Denmark have been down this road before. He was cut prior to 2016 before returning during a rash of injuries. The decision to re-sign Weston Dressler may impact Denmark’s future status.

Age: 27
His 2017: Posted a solid campaign after bursting onto the scene in 2016 as a CFL All-Star. Missed the final few games due to an upper-body injury and was replaced by Patrick Neufeld.
Synopsis: The Bombers’ need for more roster flexibility likely means the days of starting three imports on the O-line are finito. Both starting tackles in Stanley Bryant and Jermarcus Hardrick have been re-signed, as have Neufeld and import Manase Foketi. Draft picks Michael Couture and Qadr Spooner have also been developing. Bond won’t last long in free agency because he can be a dominant pile pusher.

Age: 28
His 2017: Camp opened last year with Knox as the front-runner for the middle linebacker job. He ended up starting eight games, making 33 tackles and adding two sacks.
Synopsis: Hard to figure where Knox might fit in now with the re-signing of Ian Wild and the emergence of Jovan Santos-Knox as a starter later in the season. 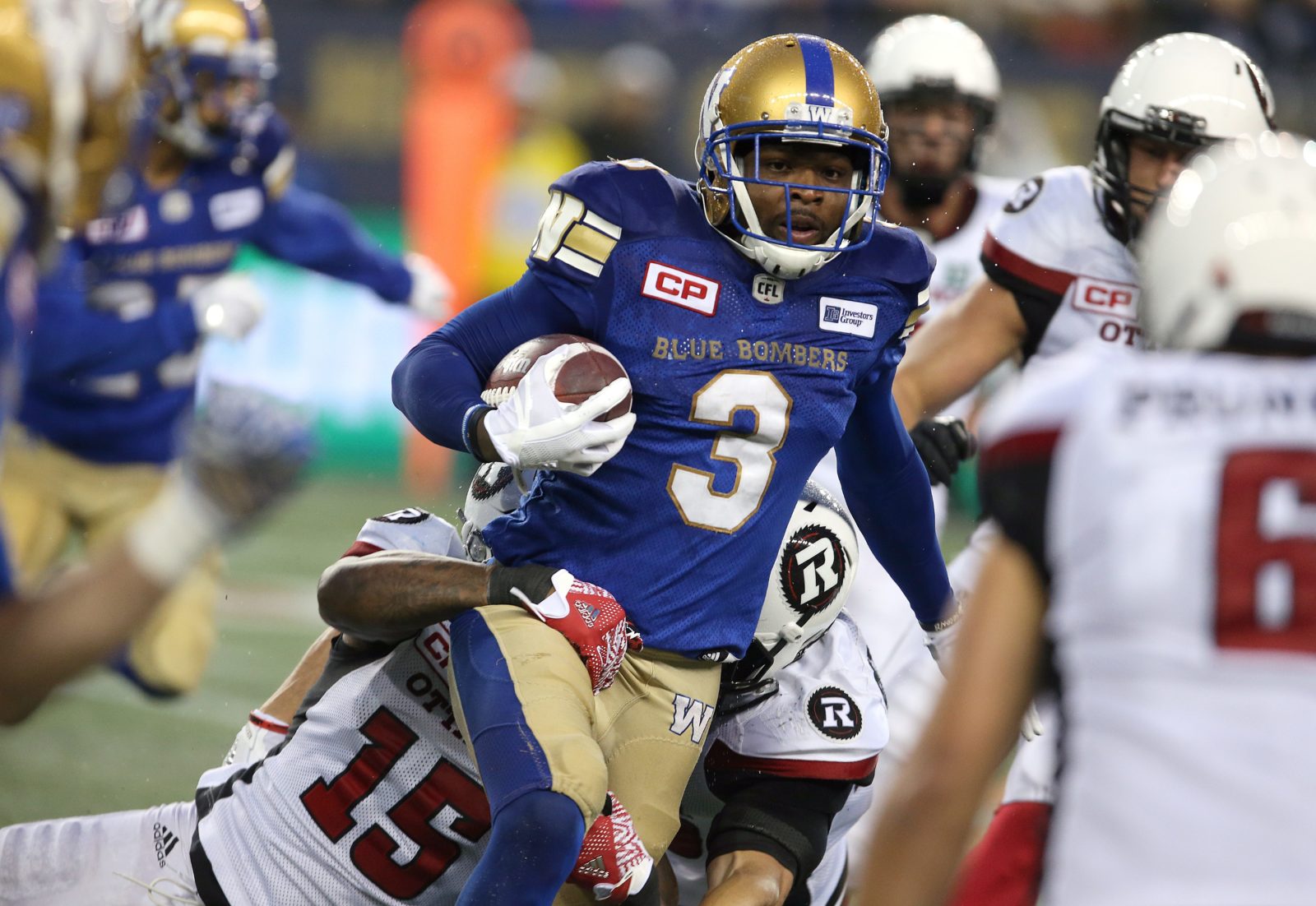 Age: 27
His 2017: Appeared in 15 games, starting five and leading the team in punt returns while picking off two passes.
Synopsis: A popular guy in the locker room, Fogg can play corner, half, and has filled in at SAM linebacker, so his versatility could make him attractive on the open market.

Age: 27
His 2017: Started 18 games and finished second to Taylor Loffler on the team with 65 tackles, a forced fumble, sack and interception.
Synopsis: His biggest fan is his head coach, but he’s become a lightning rod for criticism from fans who want the middle linebacker to be more of a thumper or playmaker along the lines of a Solomon Elimimian and less of a gap filler.

Age: 26
His 2017: He’s good at his job, even as the fullback position continues to be phased out of offences. Normand has had just 11 carries and 10 catches over the course of his three years with the Bombers.
Synopsis: The decision to dress both Andrew Harris and Timothy Flanders consistently means there is less reliance on having a player like Normand available as an in-game fill-in due to injury.

Age: 32
His 2017: Was among the CFL sack leaders when his season ended in September with an arm injury. He has 32 sacks in 47 games as a Bomber, moving him into the team’s Top 10 on the all-time QB kills list.
Synopsis: Big question for the Bombers is what value does the team place on Westerman’s leadership? The team ended 2017 with Tristan Okpalaugo and Jackson Jeffcoat shining at end, and has the athletic Canadian Trent Corney earning more reps as well. 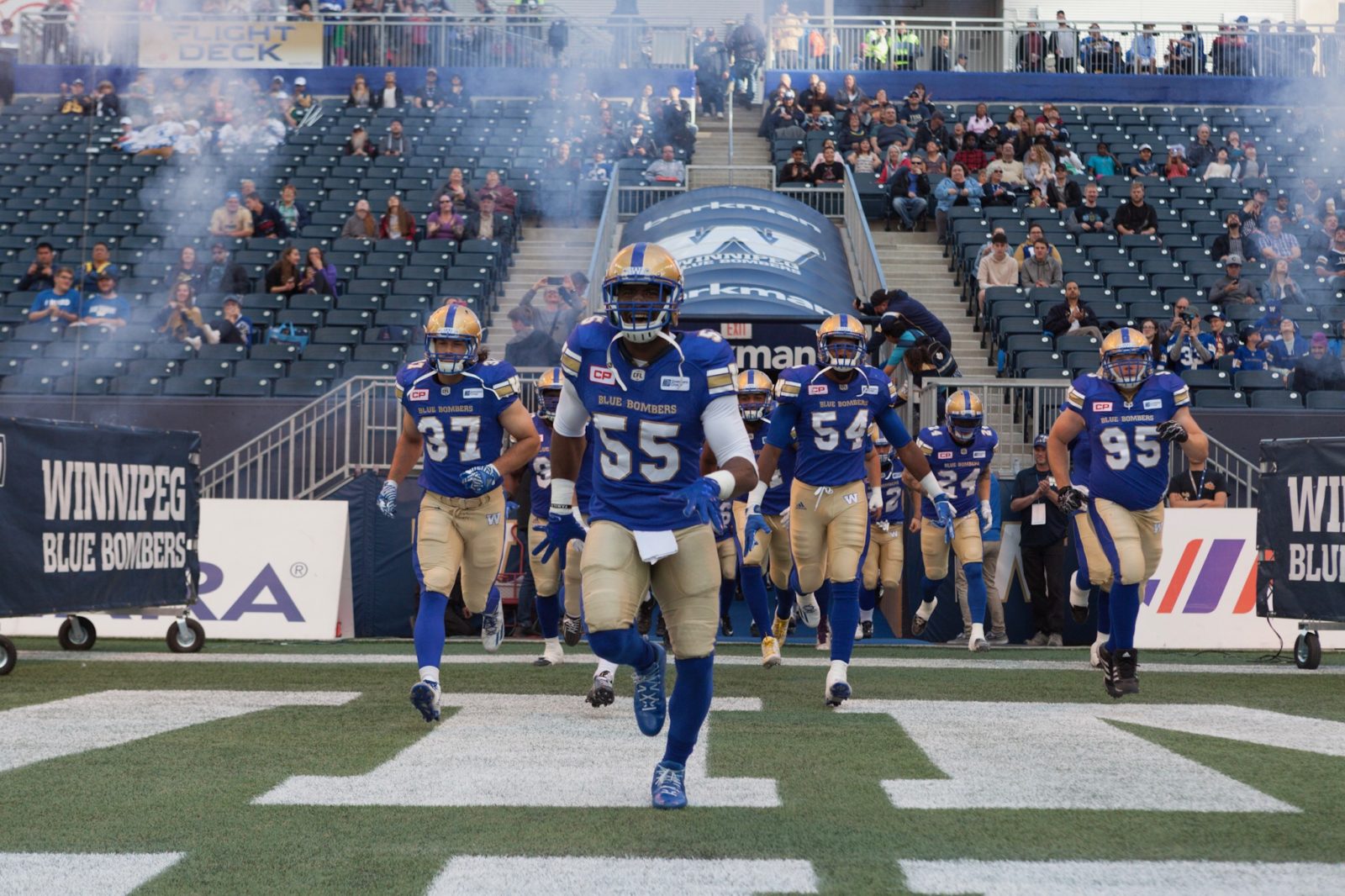 Age: 27
His 2017: Tied a career high with four sacks last year and added his first career interception as part of the D-line rotation.
Synopsis: Thomas has seemingly been forever under-valued, dating back to his draft year (2012) when he was selected in the fourth round but has carved out a solid 101-game career. He’d get interest on the open market, and the Bombers do have young Canadian prospects in Faith Ekakitie and Ian Marouf under contract.

Age: 30
His 2017: Gave the Bombers offence an intriguing wrinkle in short-yardage situations – he rushed for six TDs – and he did lead the club to a win in frigid Calgary in his lone start in the regular season finale.
Synopsis: The Bombers will likely be tempted to sniff around the QB market in free agency for an experience No. 2 behind Matt Nichols and with Dom Davis still under contract. And, like every team, they are also constantly searching for a young pivot prospect.

Age: 30
His 2017: Posted career numbers in ’17 with 45 receptions for 462 yards and three touchdowns.
Synopsis: He did his job at the wide-side receiver spot, but Matt Coates started the playoff game and the Bombers did add former Minnesota Gophers star Drew Wolitarsky in a supplemental draft last year. Those factors don’t help Feoli-Gudino’s bargaining power.