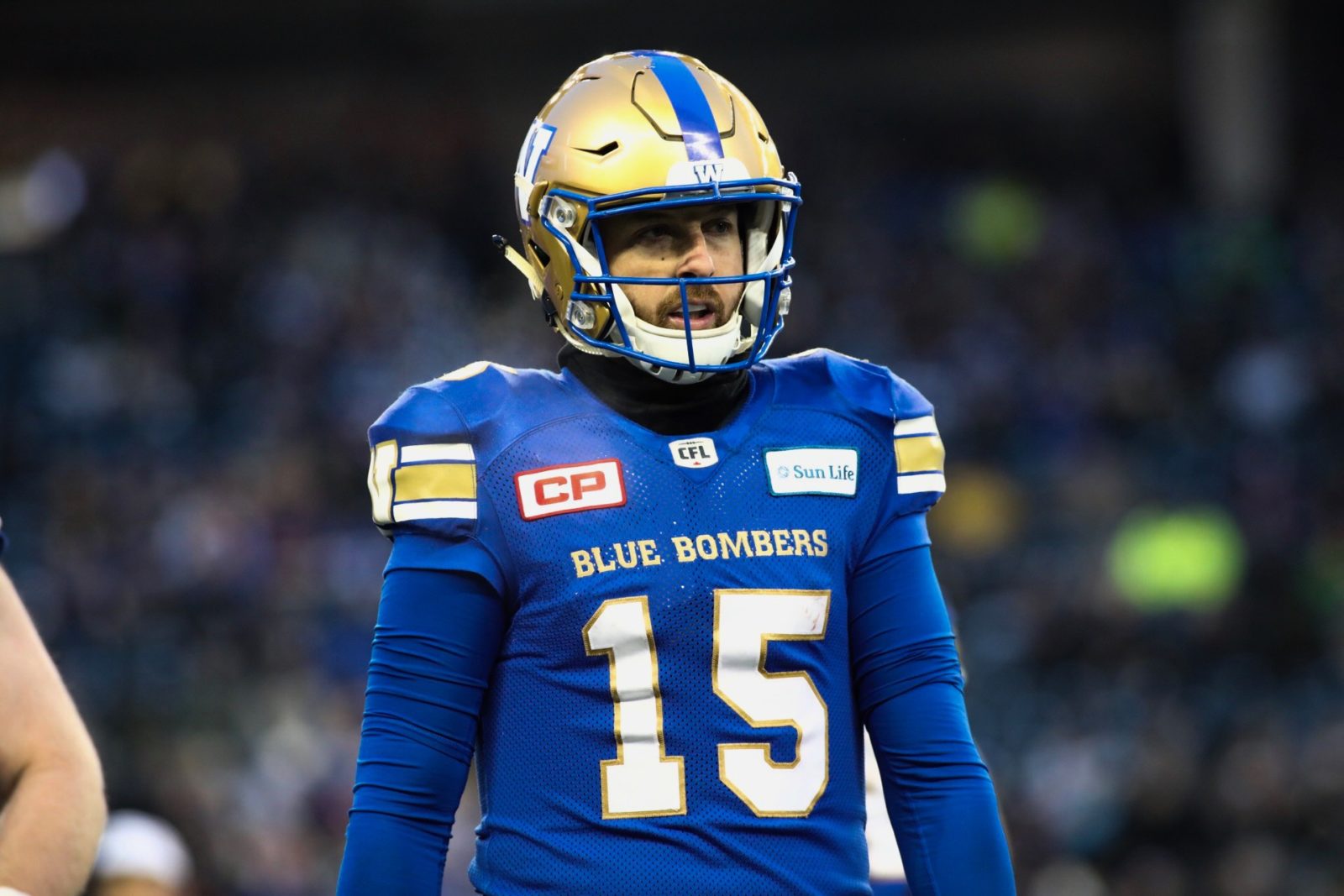 The call to pathologists and coroners to conduct an autopsy on the Winnipeg Blue Bombers 2017 season won’t be necessary.

Yes, while turnovers were massive and the holes in the depth chart caused by injuries were all factors in Sunday’s 39-32 West Division Semi-Final loss to the Edmonton Eskimos, the cause of death was really a malady that has plagued them for months.

Mike Reilly & Co completely eviscerated the Bombers defence as the veteran Eskimos quarterback – the front-runner for the CFL’s Most Outstanding Player Award – led an attack that finished with 465 yards net offence, including 334 through the air and 139 along the ground.

And, as has been the case all season, a lot of that yardage came in the huge ‘explosion’ plays and on defensive busts that have been a pockmark on this Bombers squad since the opener on Canada Day.

“It’s what they do… they attack vertical, they run the ball and they play-action to the middle,” said Bombers cornerback Chris Randle of the Eskimo offence. “They were rolling. We did well in the first half… 10-10… and then they had some explosions. It is what it is. They connected on their deep balls, their running game started working for them a little bit.

“We just didn’t mount up like we’re supposed to.” 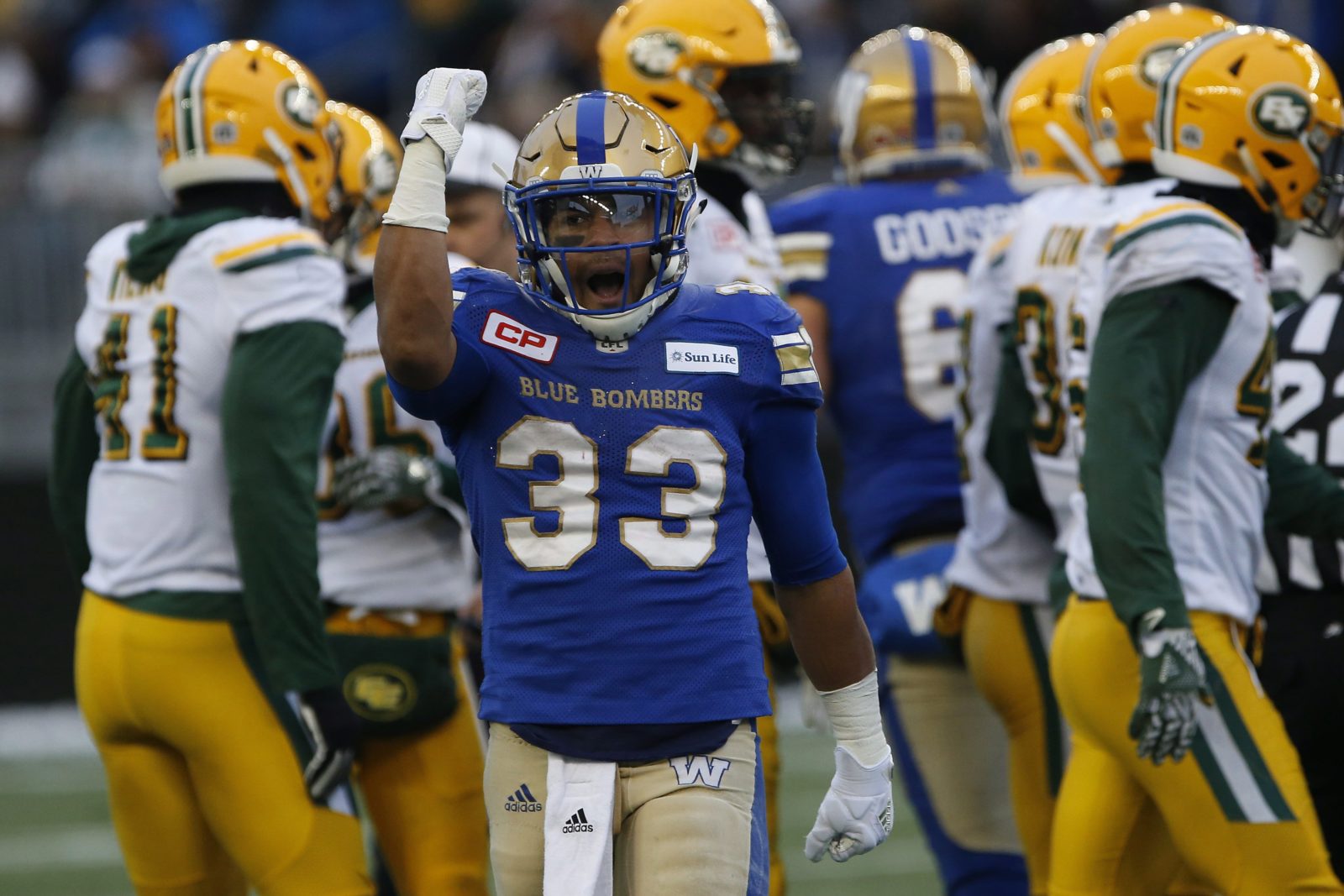 The Eskimos’ three aerial TDs all covered 17 yards or more – to Adarius Bowman for 17 and 42-yard scores and to Brandon Zylstra for 30 – while C.J. Gable had two massive runs, one for 15 yards in which 10-11 Bombers had mitts on him before he scored and another for 33 yards.

And if that’s a theme that sounds oh-so familiar, it’s because it has been talked about all season. Asked if it’s something that has to be cut down by a considerable amount next year, Randle added:

The Bombers made too many other mistakes to pin this solely on the defence, however. They lost the critical turnover battle 3-0 – on a Weston Dressler fumble and twice on downs, including a third-and-four fake punt from the Winnipeg 42 early in the third quarter that was stuffed.

Four plays later, the Eskimos suddenly had jumped ahead 18-10 in a game that had been tied 10-10 at the intermission.

“They ended up driving and scoring right there. There was a little bit of a letdown there. Our guys battled back pretty hard and our bench got themselves back together again quite rapidly.

“I feel like I let the guys down, absolutely,” O’Shea added. “Part of the plan going in is to keep the ball out of Reilly’s hands, especially in the second half because they’ve been a second-half team. We talked about how you win and part of it is making sure you control the ball more. That’s part of the plan.”

Nichols started the game for the Bombers and, despite having limited mobility, finished the game 35 of 48 for 371 yards, including a three-yard TD strike late in the game. 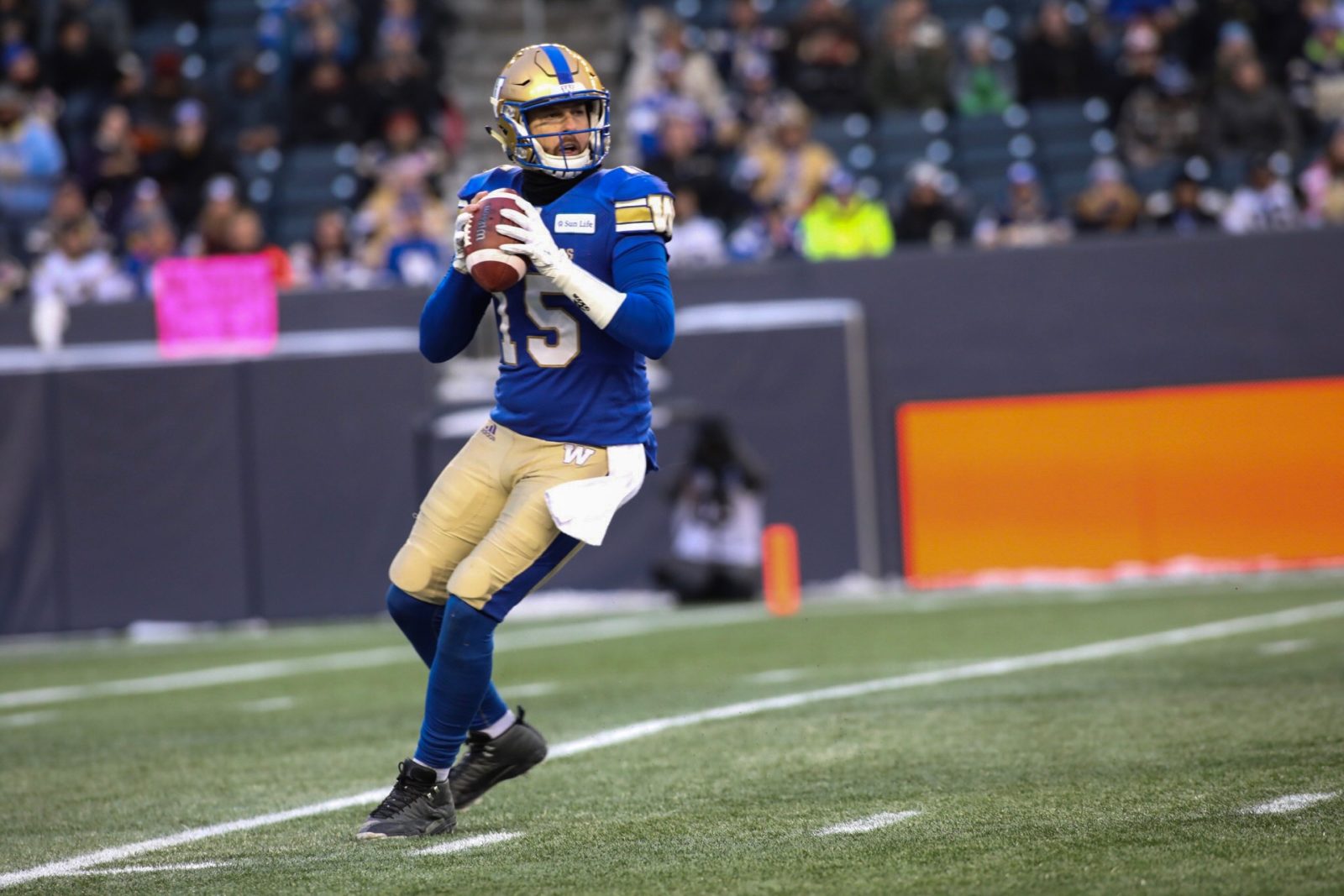 It was a remarkably gritty performance by the veteran pivot, given how the left calf injury affected what he could do.

“I felt good,” he said. “I was extremely limited. I couldn’t do more than just jog. Everything felt Ok in the pocket, but it limited us a little bit in the fact that I wouldn’t have been able to get out on the move and do any of our play-action roll-out stuff. That was tough.

“But overall, I felt like we ran our whole offence and the things I did do out there I felt good doing it. I didn’t feel like I was hampered by my movement in the pocket. It just took away a portion of our offence with me getting out on the edge and running a little bit more which I felt was a big addition to our offence earlier in the year. It was something I wasn’t able to do.”

The Bombers finished the season having lost three of their last four games, and after improving to 10-3 with a win in Edmonton at the end of September, limped to the finish line in winning just two of their final six.

Nichols, however, challenged the suggestion that the compilation of injuries was a factor on Sunday.

“I don’t know about that,” he said. “We believe in all of our guys and I thought we made a lot of great plays out there tonight as well. Obviously, guys like Moe Leggett and Jamaal Westerman and Darvin Adams… those guys are all-star guys. Travis Bond we lost at the end of the year, too. Any time you have multiple guys that are recognized as the top-tier guys at their position across the league… obviously, when you lose those guys it’s going to affect you a little bit. But I wouldn’t say it’s the reason we lost.

“It came down to some things not going our way and they did a good job of not turning the ball over, which I think everything comes back to that. It’s something we preach around here. You can look at all the stats, you can look at all the passing yardage… you win games when you win the turnover battle and we didn’t do that tonight and that’s really what made the difference.”

Add this all up and the Bombers Grey Cup drought, dating back to 1990, has been extended for another season – the longest in franchise history.

“This is the tightest group I’ve ever been with,” said Nichols. “Everyone cares about each other, everyone hangs out with each other on and off the field… it’s a complete team that you want to be a part of. There are a lot of things I’m going to take out of this season, a lot of lifelong relationships that I’ve built throughout of the year.

“There are a lot of things to be proud of in what we’ve done. I think we took another step forward this year from last year. I look forward to getting back to work as soon as possible and getting ready to take that next step next year.” 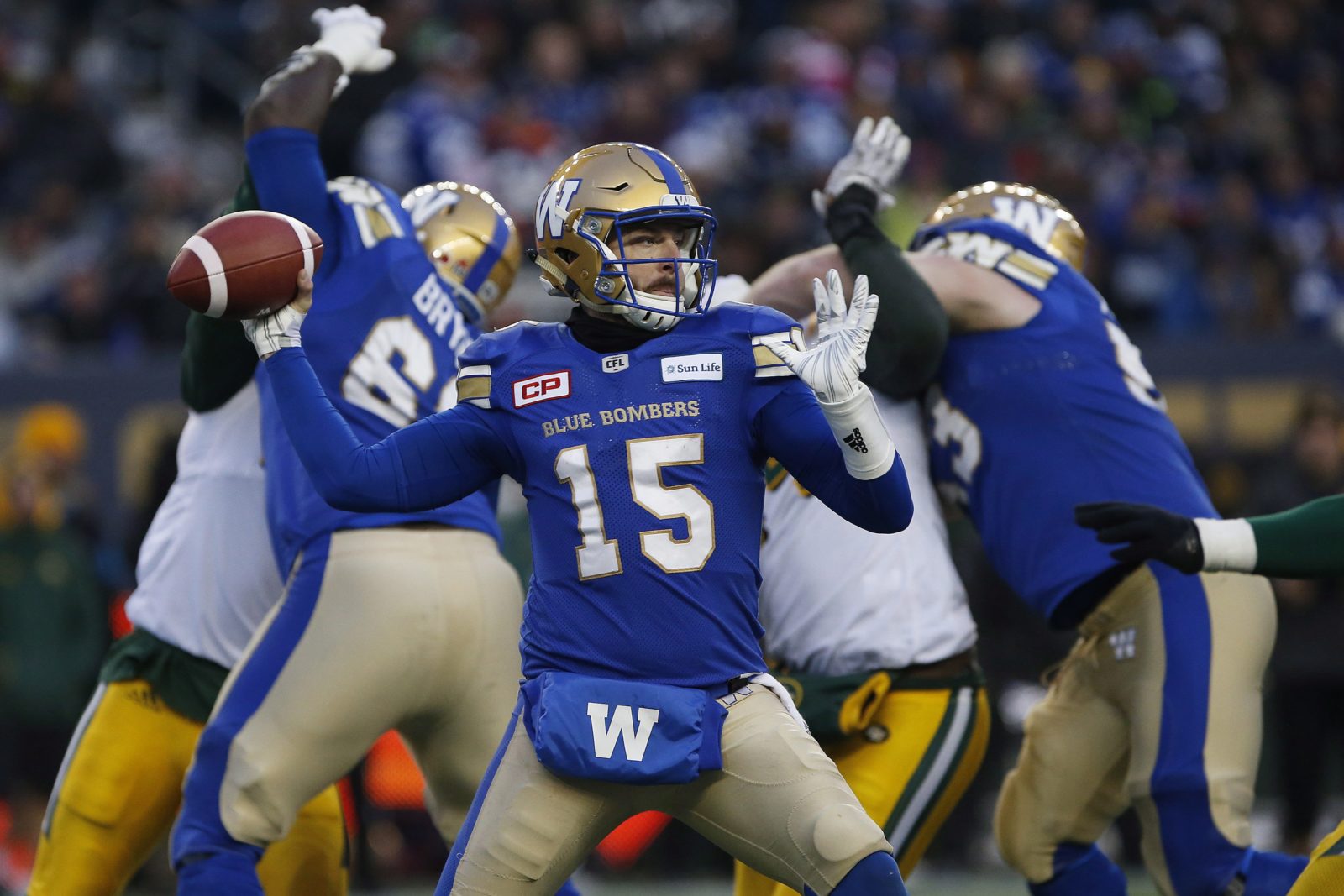 3-0: Turnovers are always critical, but are particularly massive in the playoffs. Winnipeg committed three – one fumble and twice on third-down gambles – and the Eskimos had zilch.

120: Combined yardage for Andrew Harris. He rushed 11 times for 77 yards and pulled in four passes for 43.

480: The combined yardage total for Harris in three games against the Eskimos this season.

13: The number of 300-yard passing games for Mike Reilly this year; 12 during the regular season and another on Sunday.

2-0: The Eskimos playoff record at Investors Group Field after Sunday’s win and including their 2015 victory over Ottawa in the Grey Cup.

“Right now I think they’re a little shocked. I think they expected to win, just like Edmonton. We came in expecting to win.” – Mike O’Shea on the mood in the Bombers locker room immediately after the game.