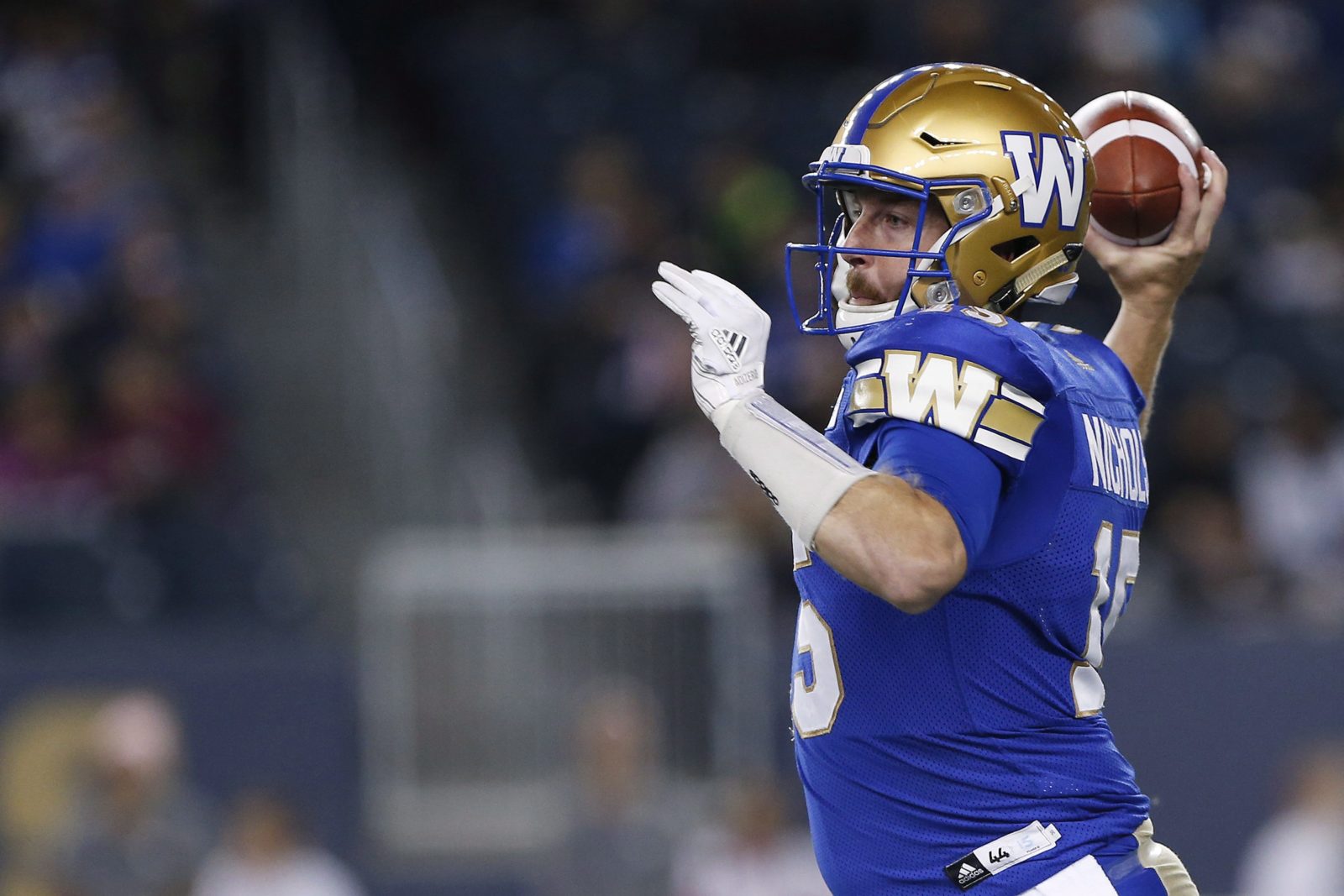 Winnipeg Blue Bombers quarterback Matt Nichols (15) looks for his receivers during the first half of CFL action against the Hamilton Tiger-Cats in Winnipeg Friday, October 6, 2017. THE CANADIAN PRESS/John Woods

The Winnipeg Blue Bombers ran into two speed bumps in their quest for a home playoff game Friday night – and one is potentially significantly bigger than the other.

The Bombers were mauled 30-13 by the Hamilton Tiger-Cats in front of 26,204 at Investors Group Field, but it’s the news that will eventually come out of sick bay in a few days that could dramatically impact their 2017 season.

Not only did the Bombers lose for just the second time since July – they dropped to 10-4 in the process – but starting quarterback Matt Nichols, running back Timothy Flanders and defensive end Trent Corney all missed most of the second half due to injuries.

Nichols, who finished the night 14 of 18 for 158 yards with one TD and one interception, did not start the second half after taking some hellacious hits and having his throwing hand examined.

Flanders, meanwhile, came up limping after a pass attempt in the opening half – he also scored the Bombes only TD – while Corney appeared to be injured in coverage on the second-half kickoff. 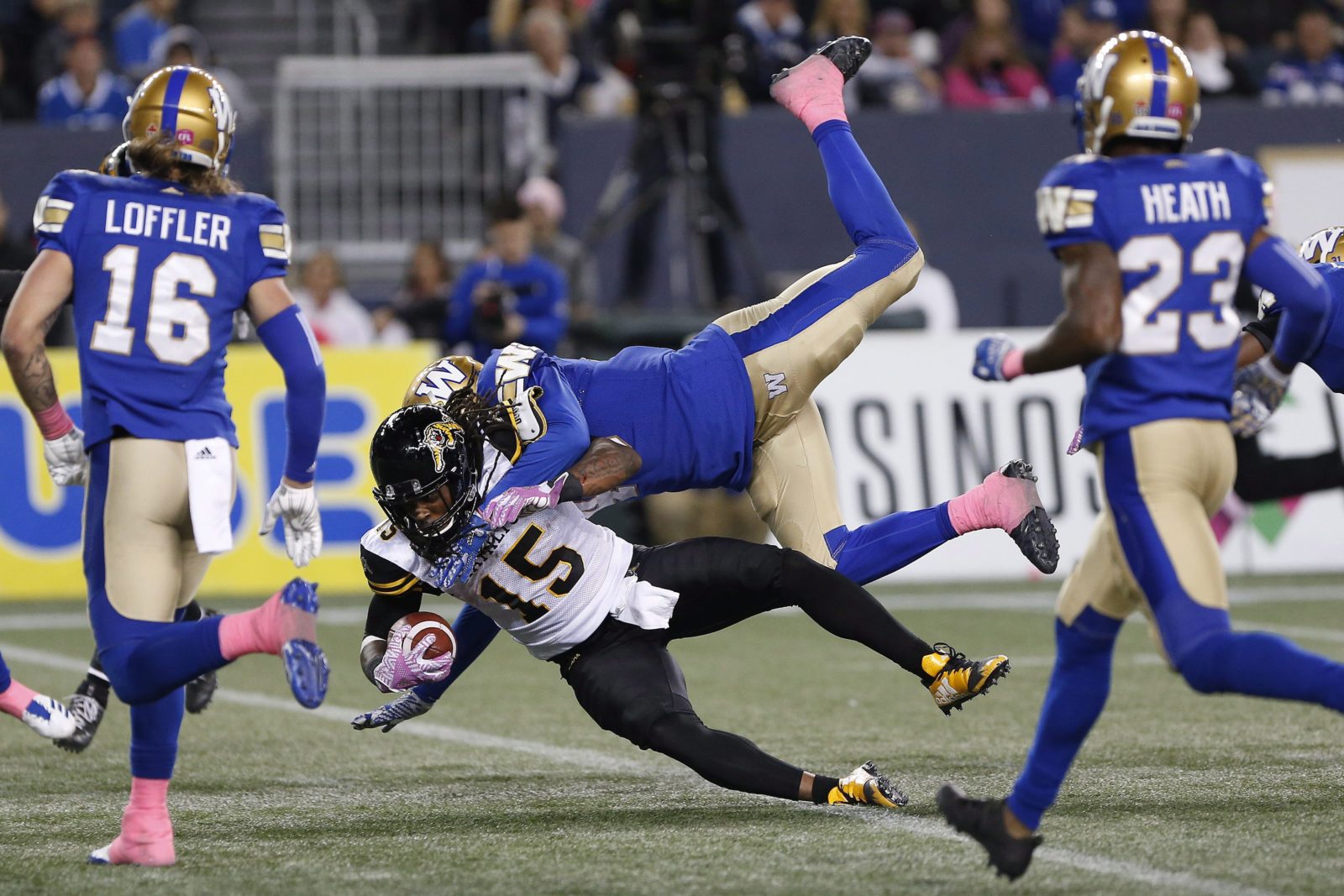 Dom Davis replaced Nichols at the controls of the Bombers offence to start the second half and completed nine of 14 passes for 84 yards while rushing three times for 21 yards.

“He’s in seeing the docs right now. We’ll get him checked out again tomorrow and see how he wakes up,” said Bombers head coach Mike O’Shea of Nichols. “I don’t think I’ve given an (injury) update post-game on anybody ever.”

That said, the injuries – particularly to a Most-Outstanding-Player candidate like Nichols – did send shudders through both the Bombers clubhouse and Bomber Nation.

“It’s tough,” said Andrew Harris, when asked what it was like to see Nichols go down to injury.

“This guy loves this team and loves his teammates and puts it out there every week. To see a guy like that go down, it’s tough. I’m hoping it’s not a long-term thing.”

“That’s our guy,” added Chris Randle when asked about Nichols. “We hope it’s not serious. We believe in Dom. We believe we can still be really, really effective as a team and we’ll go from there.”

All of this isn’t to take anything away from the Ticats, who apparently missed the memo about all the playoff-clinching possibilities for the Bombers, their pursuit of first place in the West Division and/or a home playoff date.

Hamilton improved to 4-10 – and 4-2 under new head coach June Jones – on a night when Jeremiah Masoli picked apart the Bombers defence, completing 27 of 33 for 338 yards and two TDs.

His first aerial strike came on the third play from scrimmage in the game as Brandon Banks got in behind Chris Randle for a 60-yard score and set the tone on a night when the Bombers made mistakes across the board on offence, defence and special teams.

Hamilton got points on each of their first four possessions of the game and opened the second half by driving from their own five-yard line to pay dirt to turn a 16-10 lead into a 22-10 advantage.

Hamilton also got TDs from Luke Tasker and running back Alex Green, who rushed 20 times for 97 yards.

The Bombers’ Harris referred to Hamilton punching the Bombers in the mouth and it was an apt description for what unfolded over the course of the night. Winnipeg made mistakes in all three phases and paid dearly for it.

“They came in here and right from the start, they flew around with a little more energy than us and played more physically than us,” said O’Shea. “We got behind early and they controlled the ball and the clock. We didn’t run a lot of offensive plays or got off the field on defence.

“Overall, I guess the bottom line is they made more plays than we did. It’s one loss. We’ll figure it out. The guys will come in ready to work tomorrow and make some corrections and be better the next time.” 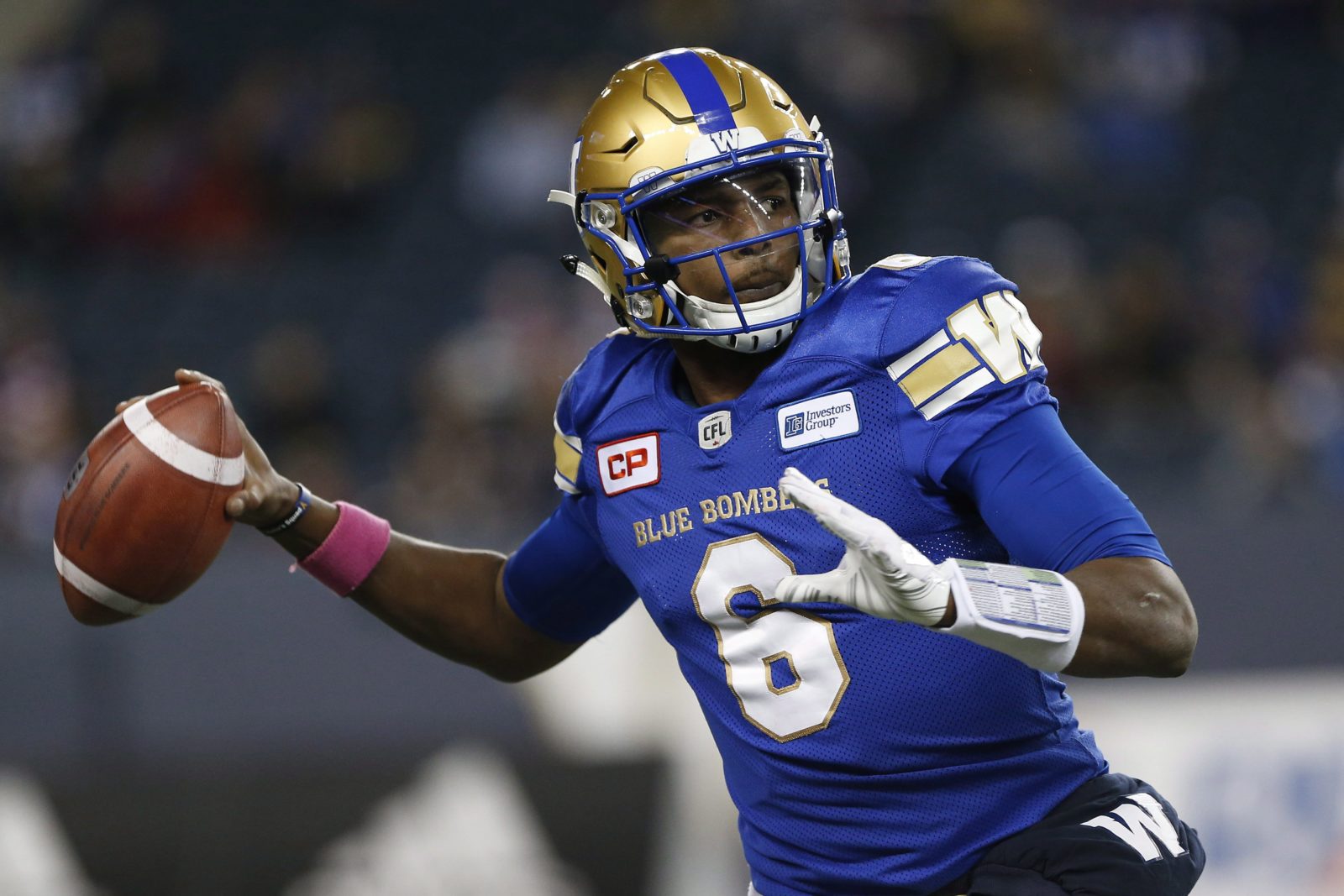 Harris finished with four receptions on the night and has his sights on the CFL record of 102, set by Saskatchewan’s Craig Ellis in 1985. Harris is now at 86 catches, a new career high and a Bombers record.

475: Net offensive yards for the Ticats, 338 through the air; 146 along the ground (minus nine yards in offence). Hamilton averaged 7.2 yards on both first and second down.

43.3: Punting average for Hamilton’s Felix Faubert-Lussier, on four punts, after he was pressed into duty due to an injury to Sergio Castillo.

104: Receiving yards for Hamilton’s Brandon Banks, 60 of it coming on the first pass of the game.