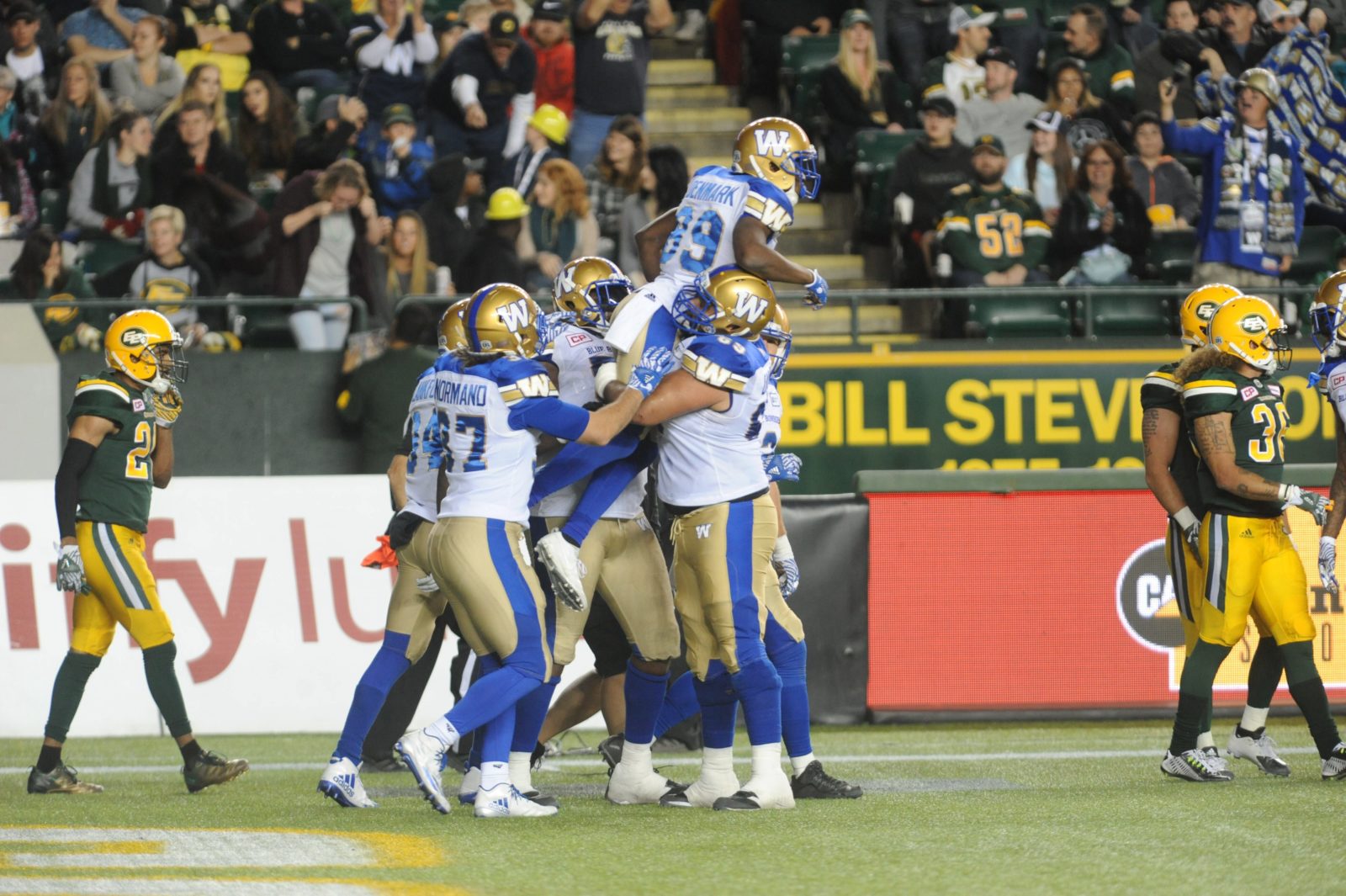 Winnipeg Blue Bombers player #89 (WR) Clarence Denmark his held up by his teammates as they celebrate his touchdown in the endzone during the 2nd quarter of CFL game action between the Edmonton Eskimo's and the Winnipeg Blue Bombers at the Brick Field located at Commonwealth stadium in Edmonton Saturday, September 30/2017. (CFL PHOTO -Walter Tychnowicz )

EDMONTON – It was more street fight than track meet, and in the end, it was the Winnipeg Blue Bombers who delivered a critical KO punch.

The victory not only improves the Bombers to 10-3 and is their eighth ‘W’ in their last nine, but gives them the season series against the Esks, who have now dropped six straight games after a 7-0 start. The Bombers also keep the first-place Calgary Stampeders, rolling along at 12-1-1, in their sights, but now have a six-point spread on both the Esks and the Saskatchewan Roughriders, also 7-6 and now tied for third, and have moved closer to a meaningful home game in November.

“Some guys made some big plays tonight to get us points,” said Andrew Harris. “Across the board, we said we were going to come out here 44 strong and everybody was going to contribute and we did that tonight.

“We want to win every game and a home playoff game in Winnipeg is something we need to accomplish, whether that be for first place or second place. We’re gunning for that.” 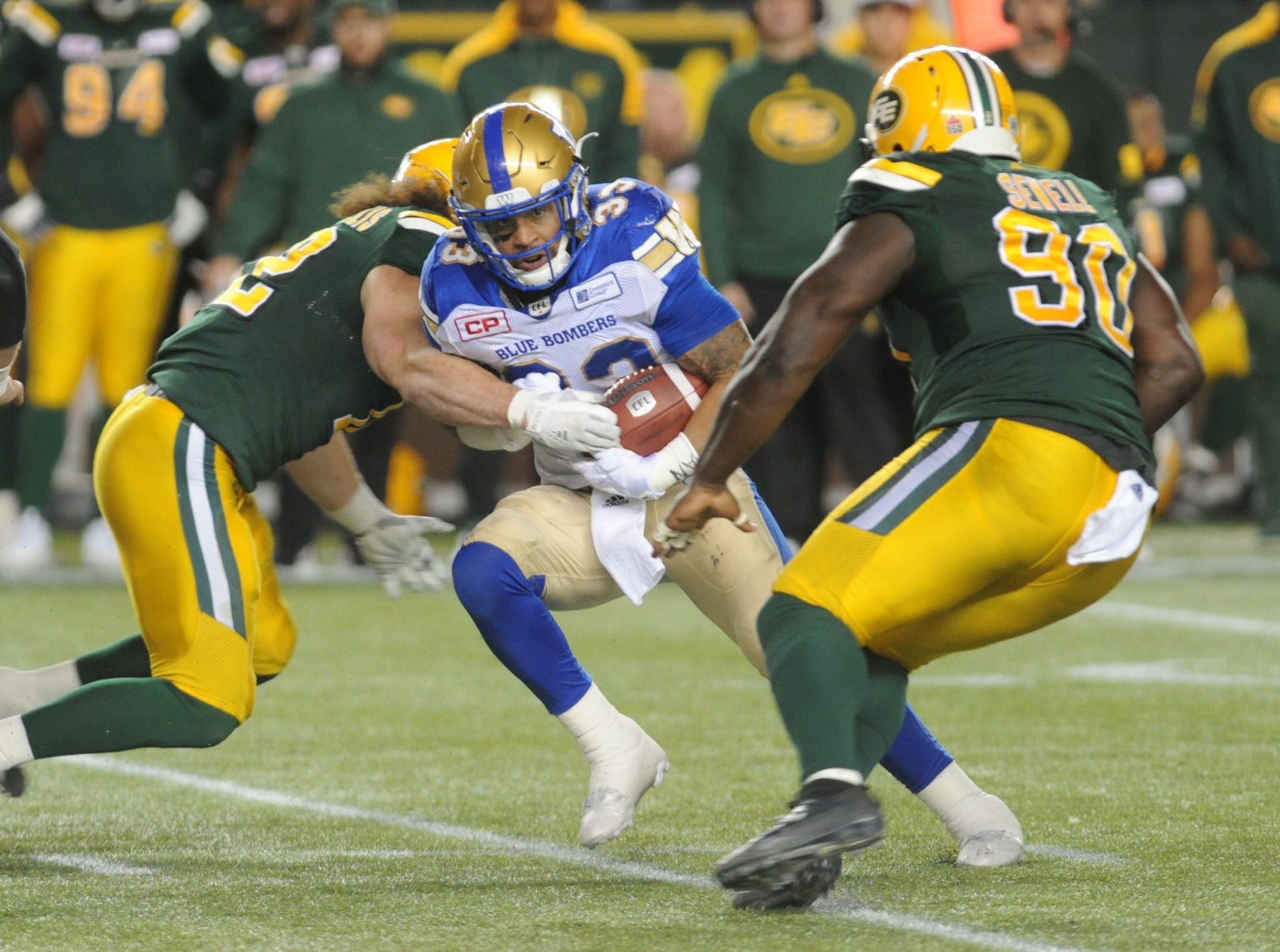 The Bombers defence was superb for most of the night, but especially so in the first half, shutting out the Eskimos in the first 30 minutes – a first for an Edmonton squad in a decade. And then when it mattered most, clinched the ‘W’ with a massive pick six by Chris Randle inside the final three minutes.

Randle capped a brilliant night by knocking down a pass attempt on third down with less than two minutes left in the game.

“We had some keys that I anticipated in that situation,” explained Randle, detailing his 37-yard interception return TD. “They loaded the box and had max protection in that situation. In that situation, where I felt like they were going to pass the ball, I told my weak (side) half to anticipate this… so I could be more aggressive.

“That’s a pretty big play, man,” added Randle, when asked if it was the biggest of his season. “I think for the moment and for our team that was probably one of the biggest plays I’ve had… thus far.”

The efficiency of the offence and the gritty performance by the defence helped overshadow a rarity: A game in which Justin Medlock really struggled in the placekicking department. Medlock missed all three of his field goal attempts – from 54, 41 and 33 yards – and for the first time as a Bomber, also missed a convert.

“That was tough,” said Medlock. “It just happens. I don’t know. I just missed.”

“He’s as professional as they come,” added head coach Mike O’Shea. “He’ll work some things out. But this is the idea of football: It’s the greatest team sport for a reason. We’ve got a bunch of guys who’ve got his back and they’re making plays out there for him.

“I’m not worried about Justin Medlock. He’s the best in the league, ever, for a reason.”

The Bombers cranked out 38 first downs and did not have a two-and-out offensively in their win over Edmonton in August, but the score-fest expected Saturday didn’t materialize.

Winnipeg had 20 first downs and 332 yards net offence, but got touchdowns from Clarence Denmark, Adams and Harris in sealing their 10th win.

“That was a grind-it-out game,” said Nichols. “Both defences played extremely well, low scoring in the first half. That’s a full team win. Offensively I felt like we did some good things and put together a few drives, finished them off with some touchdowns. But overall, we didn’t play our best game. But it shows the type of team we have here where our defence can come out and play that way and pick us up.

“They had our backs tonight. Give all the credit in the world to our defence. They were great and made the big plays when they needed to.” 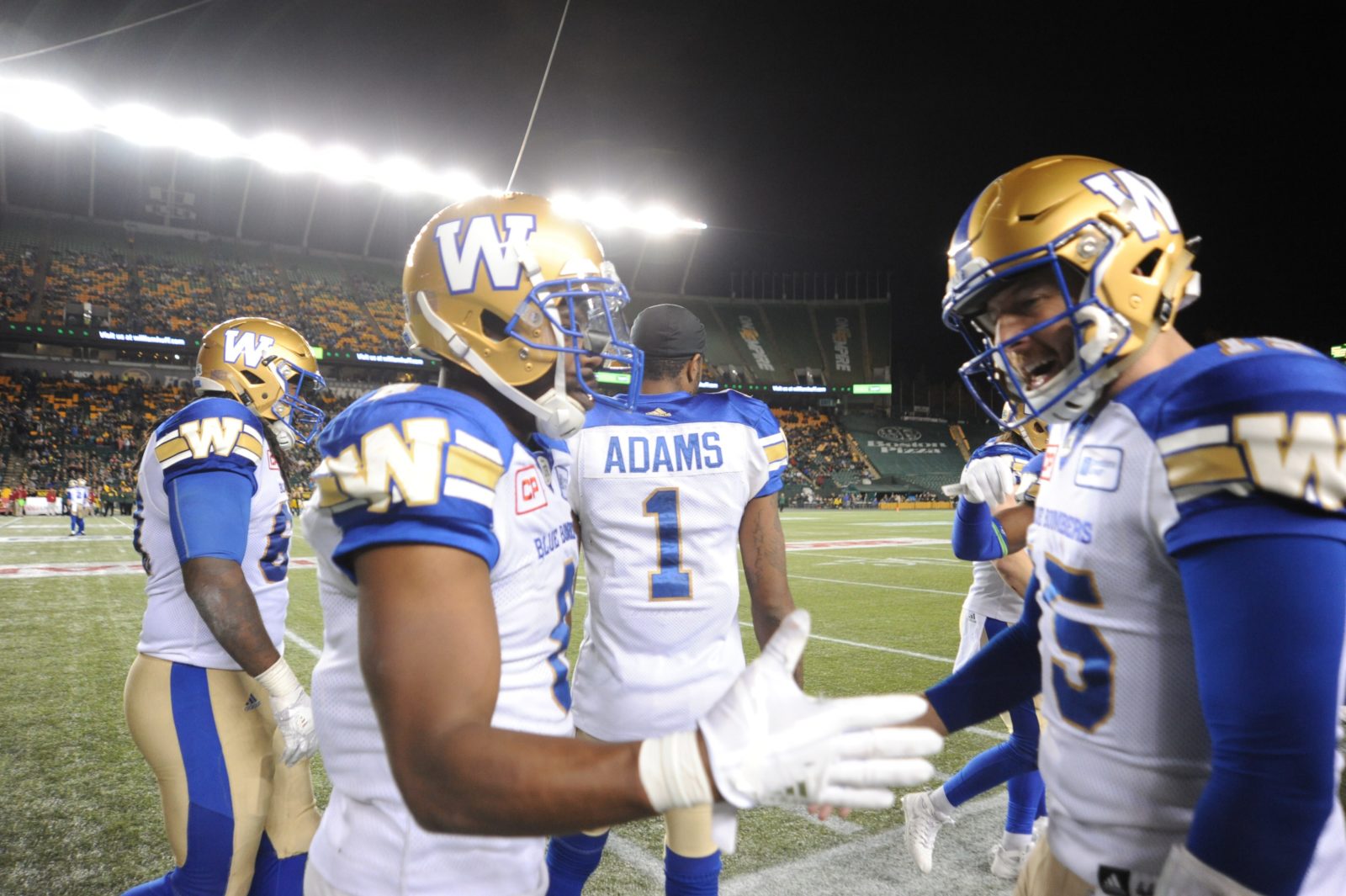 3: Turnovers forced by the Bombers tonight, including the critical game-changer in Chris Randle’s 37-yard interception return with less than three minutes remaining.

Harris finished with nine receptions on the night, and after breaking the Bombers record for most catches by a running back in last week’s win over Ottawa, also has his sights on the CFL record of 102, set by Saskatchewan’s Craig Ellis in 1985. Harris is now at 84 catches, a new career high.

Bombers WR Julian Feoli-Gudino took a shot after a catch and fumble in the second quarter, and did not return to the game with an upper body injury. The Bombers dressed only one reserve receiver, Matt Coates, and he finished the game… Harris took a shot to the back while scooping up a loose ball late in the first half and had to be helped off the field, but did return in the second half… Linebacker Maurice Leggett, meanwhile, appeared to injure his shoulder on the first Eskimos drive of the second half. Kevin Fogg replaced him in the starting defence and Leggett did not return.

0: Points by the Eskimos in the opening 30 minutes, marking the first time in 10 years they had been shut out in the first half.
45: Receiving yards for Darvin Adams, giving him 1,006 this season and marking the first time in his career he has eclipsed the 1K mark.
3: Field goals missed by Justin Medlock
9: Tackles for Bombers linebacker Jovan Santos-Knox, a team high.
5/2: Interceptions for Chris Randle this season, a career high, one of which has been returned for scores. Randle has two TDs this year, the other on a fumble recovery in Ottawa.
10: Mike Reilly passed for 311 yards, his 10th 300-yard game this season. The CFL record is 14, set by Doug Flutie in 1991.