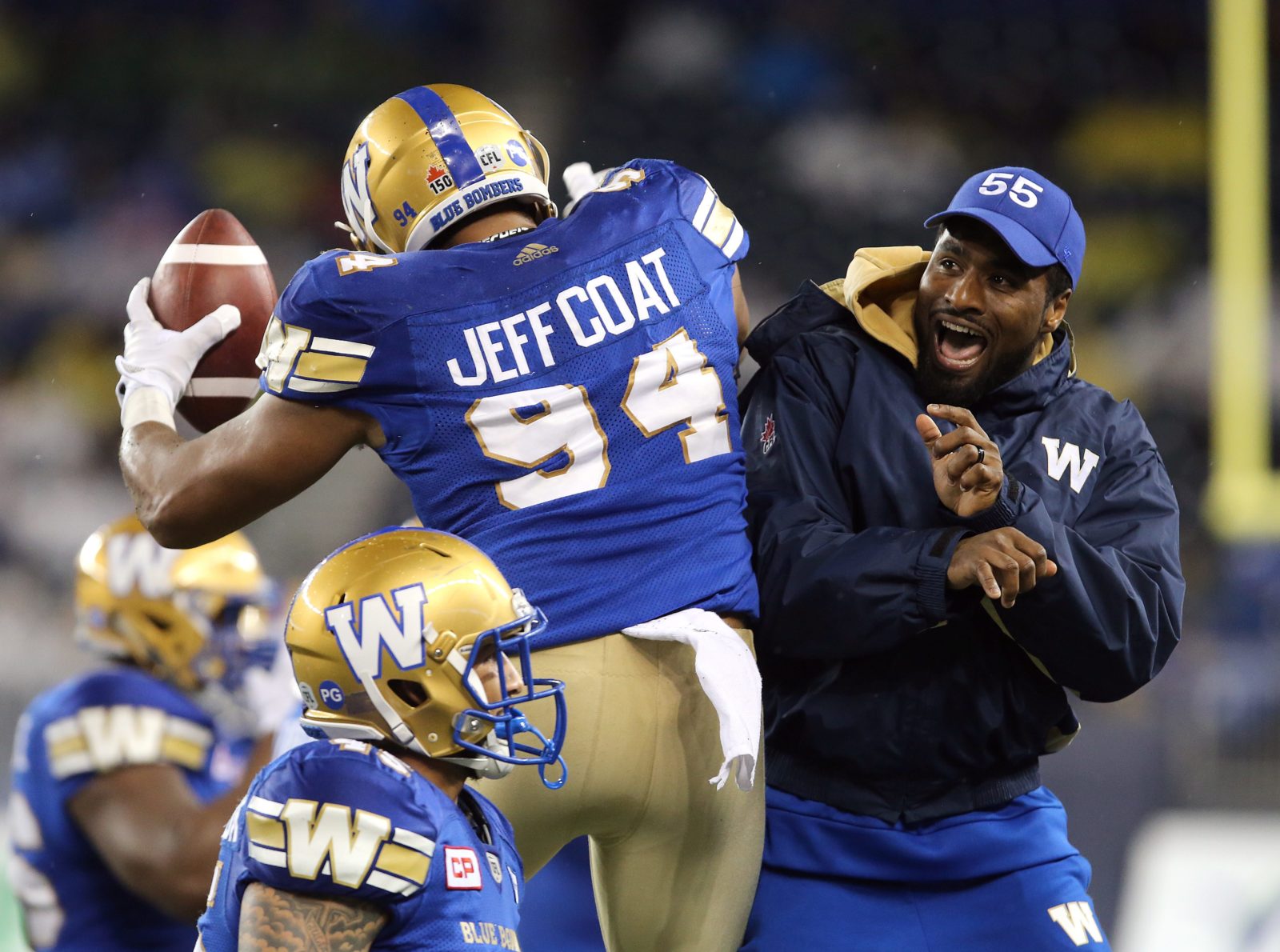 They’ve won in the heat of summer, both at home and in hostile territory. They’ve won offensive track meets and down-and-dirty slugfests.

And Friday night in monsoon conditions that absolutely drenched Investors Group Field, the Winnipeg Blue Bombers proved they can win a ‘mudder’ too, knocking off an injury-ravaged Ottawa REDBLACKS squad 29-9 in front of an announced crowd of 26,588.

The victory, coming after the start was delayed 20 minutes due to lightning in the area, improves the Bombers to 9-3 and means the Bombers have now won seven of their last eight dating back to their 2-2 start.

They are three points back of the first-place Calgary Stampeders, 10-1-1, who are in Saskatchewan to face the Roughriders on Sunday. 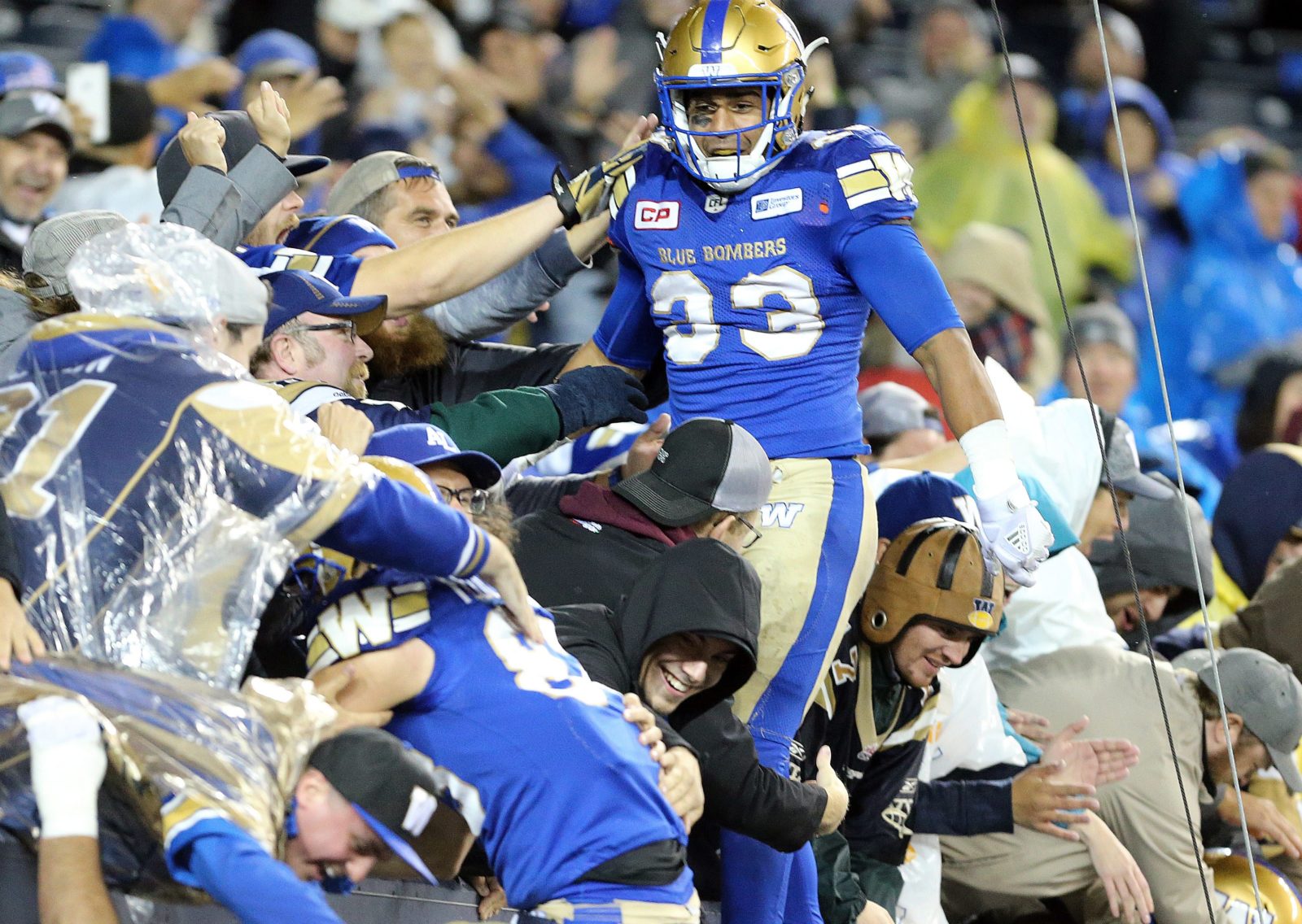 “To put up 550 yards offence (521 net), you wouldn’t think you would call it a grinding game, but it felt like that. They were stingy at some points… the footing wasn’t great, the ball wasn’t easy to catch and easy to move, but we found a way to get it done.”

The Bombers were essentially facing a defending Grey Cup championship squad in name only. The REDBLACKS were without their first and second quarterbacks in Trevor Harris and Drew Tate, short two offensive linemen in Jon Gott and Nolan MacMillan, without receivers Josh Stangby and Kenny Shaw and defensive back Jerrell Gavins.

And it showed, particularly on offence as third-stringer and ex-NFLer Ryan Lindley struggled against a Bombers defensive dozen missing Jamaal Westerman for the first time in 2 ½ years, but bringing more pressure against the REDBLACKS.

Lindley finished just 16 of 36 for 151 yards with no TDs, while being intercepted once by Maurice Leggett as the REDBLACKS pounded the ball with William Powell – 14 carries for 107 yards – but managed just 266 yards offence.

His counterpart, meanwhile, was superb. Matt Nichols completed 23 of 34 for 319 yards with two TDs and hit seven different receivers on the night with the two scores, a four-yard strike to Timothy Flanders, and a 75-yard picturesque bomb to Darvin Adams.

But there was creativity in Paul LaPolice’s attack, even in the iffy conditions. The Bombers finished with the 500+ yards offence against one of the CFL’s stingiest defences, worn down by a unit that held the ball for 35 minutes and 44 seconds.

“It’s a mental thing,” said Nichols of handling the conditions. “We played in more than a few last year. Even before the game there was a little bit of a lightning delay before we were able to get out there and warm up. The talk around the locker room was laughter and it wouldn’t be a season without the Bombers getting a lightning delay.

“It’s how you mentally approach it, and for me, I played college football in the Pacific Northwest and played in a lot of rain games. It’s just something that is mind over matter. Both teams have to play in it and you just try and go out and execute as best you can.”

Adams was sensational, finishing with seven receptions for 195 yards, boosting his season totals to 65-961, both career highs.

“It feels good to score, but it feels better to win,” said Adams. “We played a good game. All three phases – offence, defence, special teams – the guys came out ready to play and not letting the weather take part in messing us up in the game. The guys came out and did a good job, stayed focused and played football.

“It was just like being a kid. I played in a lot of rain at home. It’s nothing. It’s football.” 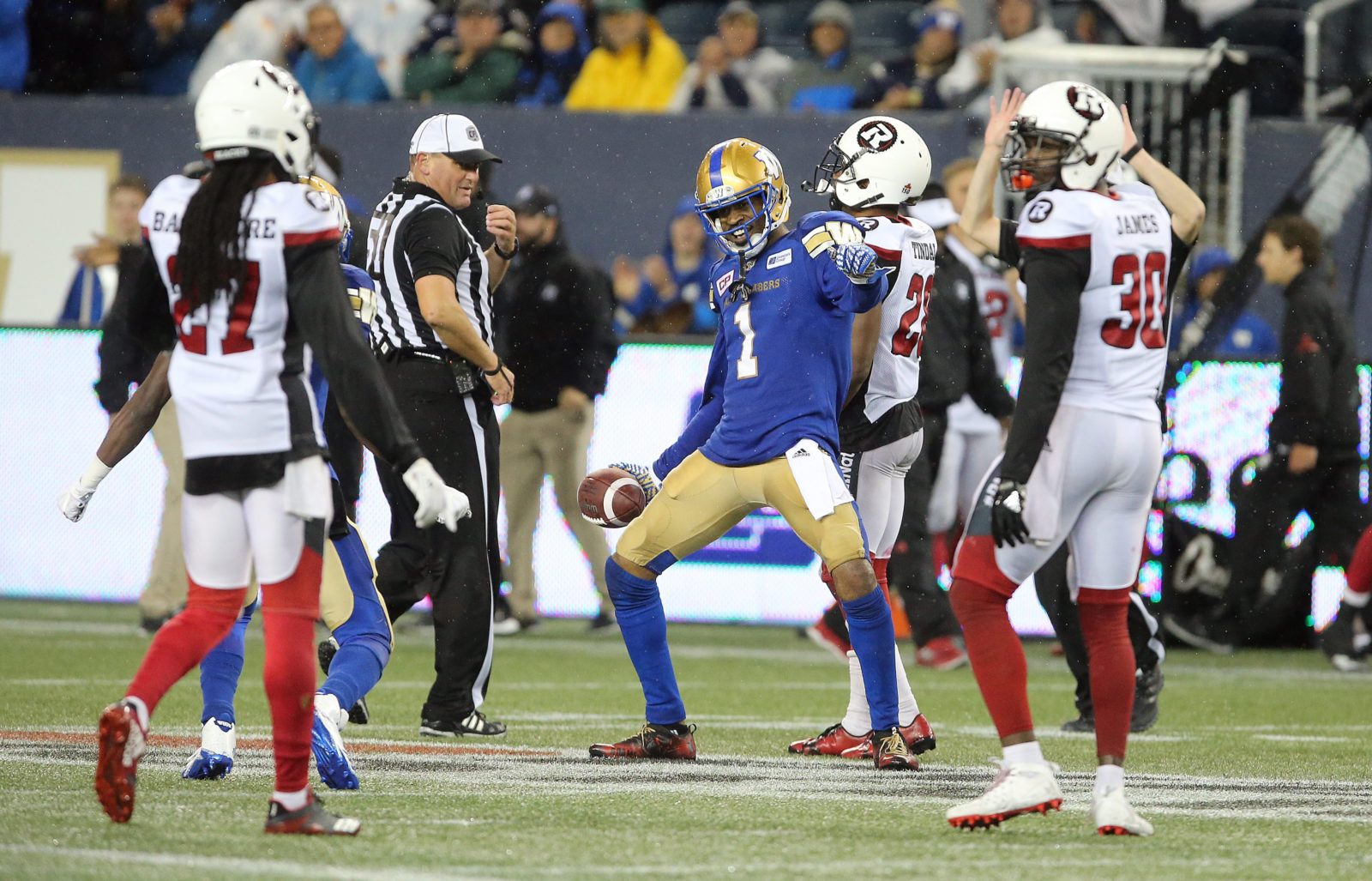 5: Home wins for the Bombers this season, which means the club will post a winning record in their own barn for the first time since Investors Group Field opened in 2013. Winnipeg was 4-5 at home last year, 3-6 in both 2015 and 2014 and just 1-8 in the first year of the new stadium.

The Bombers have won five straight at home after dropping their opener to Calgary and is 9-3 in its last 12 at IGF.

Harris finished with six receptions on the night and, in the process, set a new Bombers record for catches by a running back. Harris now has 75 receptions with six games remaining, and broke the mark of 71 set by Robert Mimbs in 1991.

The Bombers announced at halftime that receiver Weston Dressler would not return after suffering an upper-body injury. Bombers head coach Mike O’Shea did not have an immediate update on his status after the game.

3: Field goals by Justin Medlock. He connected on nine of 10 tries in the two games vs. Ottawa this year, and dating back to last year, hit on 14 of 15 against the REDBLACKS.

192: Yards rushing by the Bombers, a season high.

9: Points surrendered by Winnipeg, the first time the defence has held an opponent to single digits since a 22-7 win over Saskatchewan in the 2015 Banjo Bowl.

“I think it stems from being rested from the bye week. Guys coming back and really wanting to be back at work, if you call it that. They want to be back on the field with their teammates. Very focused, they did not take anything for granted, they did not take this team lightly. Well prepared by the coaching staff and just dialed in, really.” – Mike O’Shea on his team’s effort.