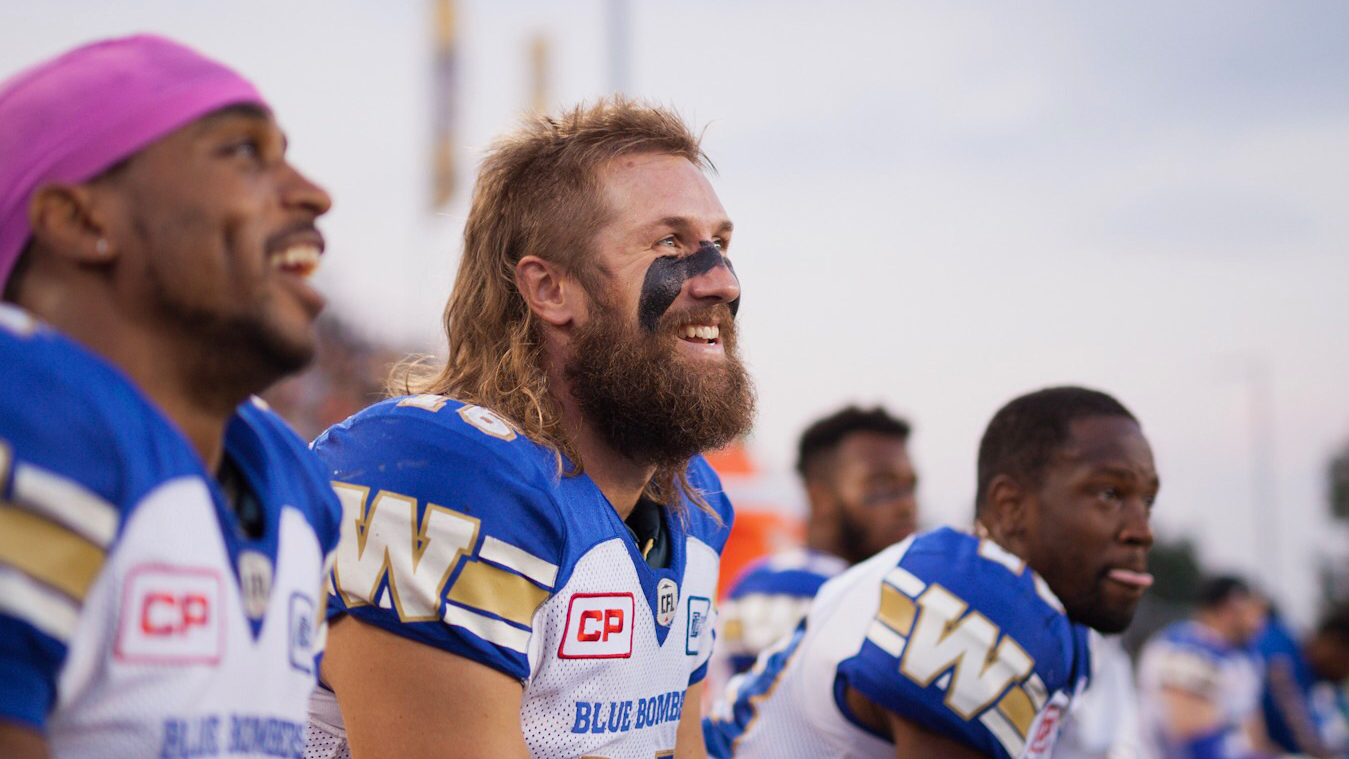 The first bus has already arrived at the hangar, and the players and some coaches have long boarded the team’s charter plane as it awaits the second bus leaving Tim Hortons Field. It finally arrives at 11:58pm ET and pulls up 40 yards from the aircraft, dropping off General Manager Kyle Walters, Head Coach Mike O’Shea, and a few more coaches and staff.

It’s been another solid road victory, our third of the season and 10th in our last 13 road games. As I walk up the stairs to the aircraft doorway, I could hear the celebrating and happy chatter coming from the group already inside.

Coach O’Shea walks on first from the back of the plane, and heads to his seat at the front. As the entire plane erupts into a chant, I turn to Head Athletic Therapist, Al Couture, and ask “what are they saying?” 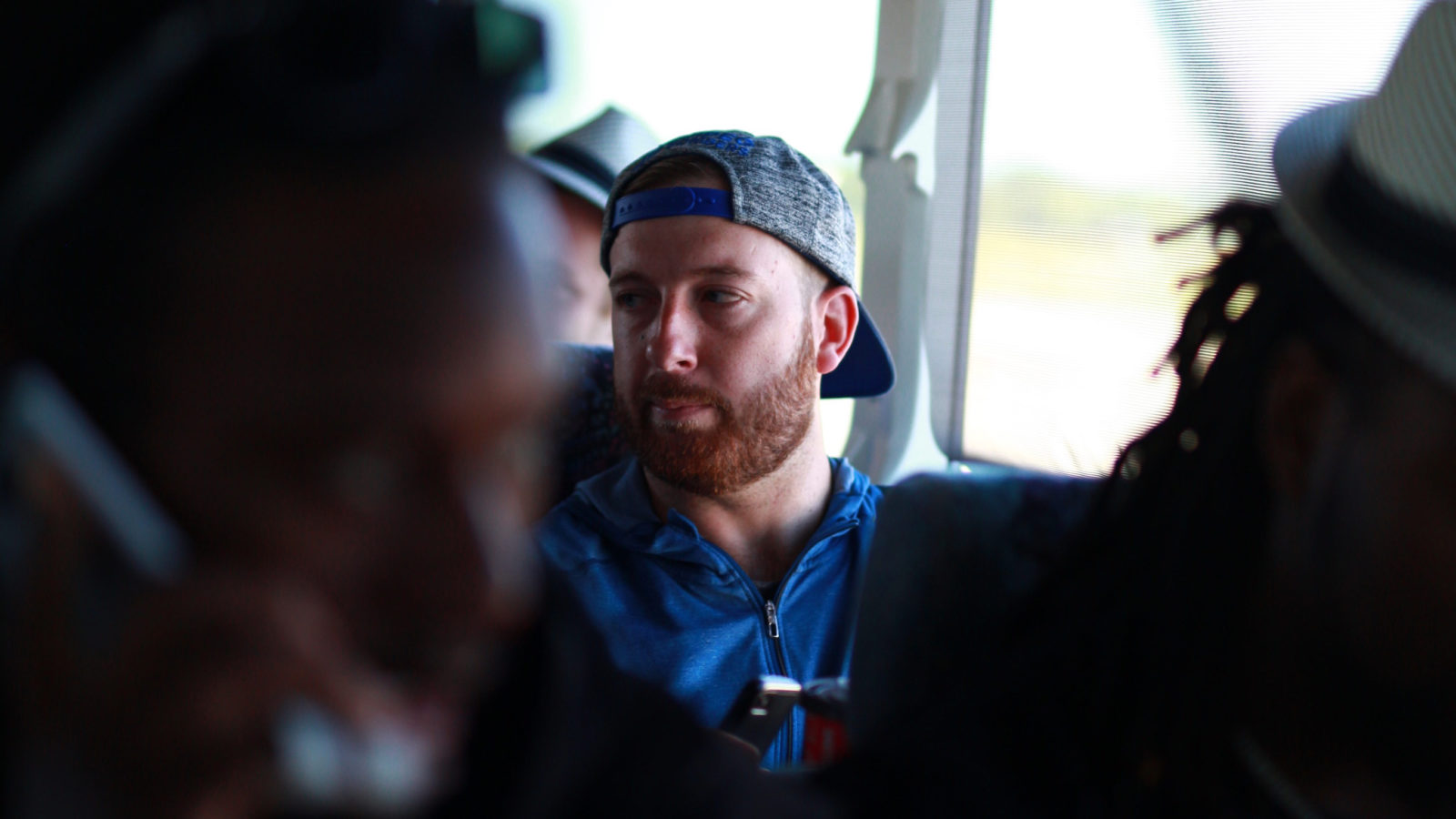 In row 19 by the window, quarterback Matt Nichols sits quietly watching the game film on his iPad. Towards the far back, a few guys have some music going, and many throughout the plane are talking animatedly.

Then a new chant begins: “You gotta dance…” this one directed at Abu Conteh, a rookie who got his first career game action on Saturday night. Normally, a quick dance routine is reserved for home games following a walkthrough for any player who is getting onto the roster for the first time, but I guess everything needs a change once in a while.

Before take-off, Coach took the mic at the front of the plane and went over the schedule for Sunday and Monday: “Enjoy it but be smart, we have a quick turnaround and we need another win…” As the flight progresses into the night, it gets a bit quieter, but you can still hear the laughter of team leaders like Chad Rempel and Sam Hurl.

It’s 1:30 am and Wade Miller, Kyle and Coach are discussing Hamilton’s decision to kick-off to start the third quarter, because it was the same situation we found ourselves in a week prior in Ottawa. Coach spends a lot time thinking about game scenarios, so situations like those, even though they weren’t his call to make, interests him. He continues to read the stats package while pizza and sandwiches are passed through the aisles.

A long-standing joke – for over a year now – is that it’s always Kevin Fogg’s birthday. Almost every trip, someone will end up convincing a flight attendant to wish him a happy birthday on the intercom, not knowing this is a weekly occurrence. Everyone laughs every time like it’s the first time. As we begin our approach to Winnipeg around 2:00 a.m., the flight attendant takes the microphone: “Thanks for flying with us, congratulations on the win,” she begins. “And I just wanted to wish Kevin Fogg congratulations…” the plane already breaks out into laughter like we haven’t heard it 25 times. “I understand he’s getting married…” she continues as the laughter escalates. Perhaps that’s the new joke.

I’ve been in this job for nine seasons now, and have been on all sides of the good and the bad. This is a group, from the players, to the coaches and the staff, that seems like the ultimate family. If it weren’t so true it would sound cliché. Leaders like Matt Nichols, Andrew Harris, Chad Rempel, Chris Randle, Stanley Bryant and so on, are just as valuable to our group as any rookie is.

We all know what this Thursday means. Just another football game, of course, but against an undefeated opponent, a West Division rival, a team we have yet to ever beat at Investors Group Field. It’s Military Appreciation Night with two fly-pasts, the 50/50 pot is starting at $100,00, and the weather promises to be a great evening for football, and our last summer game of the year. There are still tickets available, you can purchase them right here.

Looking forward to it.