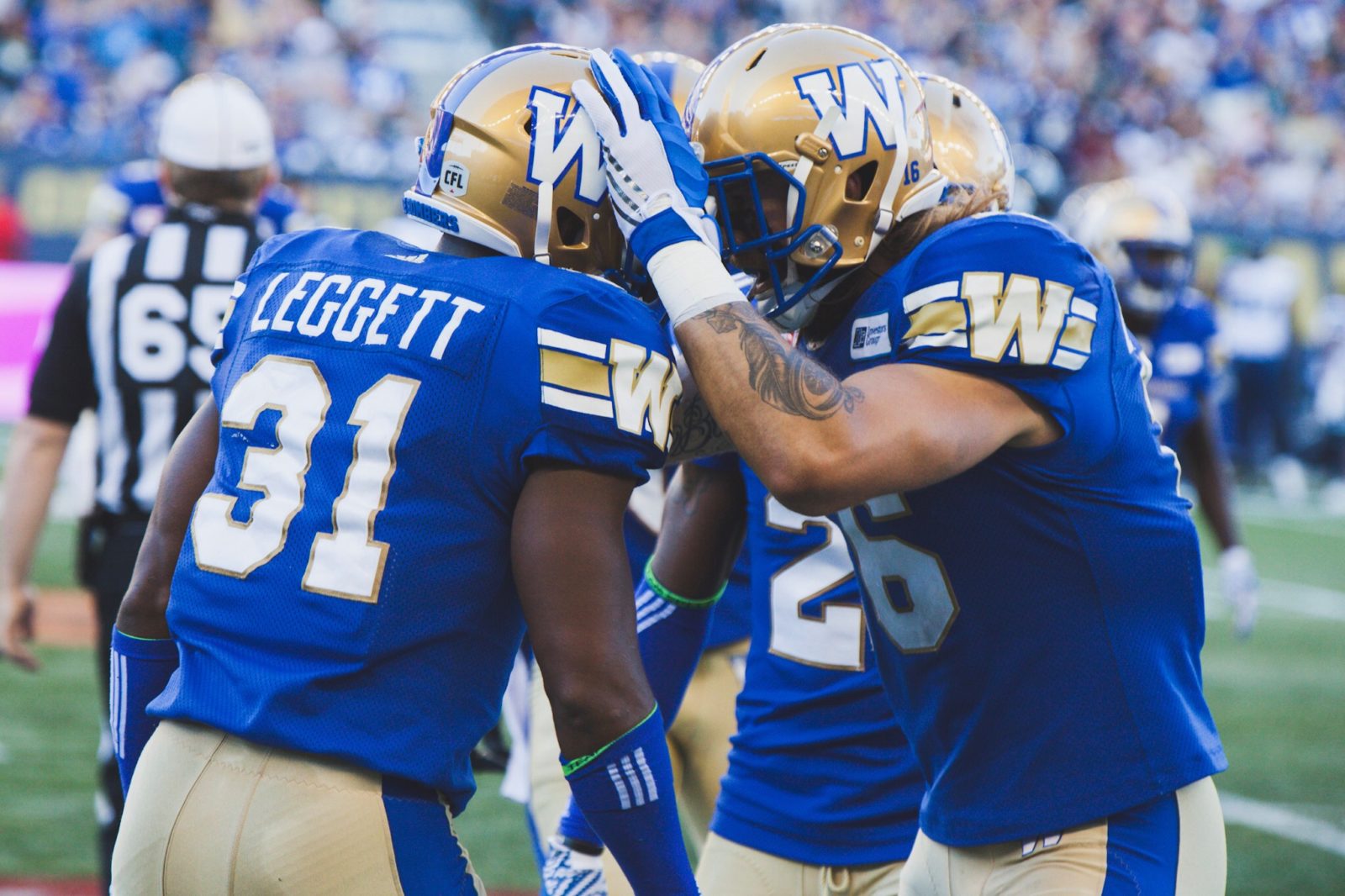 It was far from a textbook victory – few wins ever are – but a lot of what the Winnipeg Blue Bombers did Thursday night embodied everything coaches and players collectively want and preach from themselves.

The Bombers were resilient when they needed to be, mentally and physically tough in critical moments, and mistake-free when it mattered most.

Add that all up, and early season warts and all, the Bombers are now 2-1 after a 33-25 win over the Toronto Argonauts in front of 25,085 fans at Investors Group Field.

“We’ve got the guys on this team who have been through it, who have seen everything, been in every situation,” said Bombers quarterback Matt Nichols. “We were able to lean on each other and make big plays down the stretch.”

“All three phases did a great job in certain parts of the game and all three probably have some things to clean up. That’s how football goes but the most important thing is we were able to play four quarters and find a way to win in the end.”

Critical in the victory was the return to some old-school traits for the Bombers, with the defence limiting Toronto to just three points in the second half – and none in the fourth quarter – and the offence pounding the ball along the ground with Andrew Harris.

Harris finished the night with 17 carries for 81 yards and two touchdowns, seemingly pushing, pulling, and dragging defenders for every inch along the way.

Bombers head coach Mike O’Shea recognizes perhaps better than anyone what Harris brings to the club just in terms of attitude, and at the end of his post-game media session, went out of the way to praise No. 33. 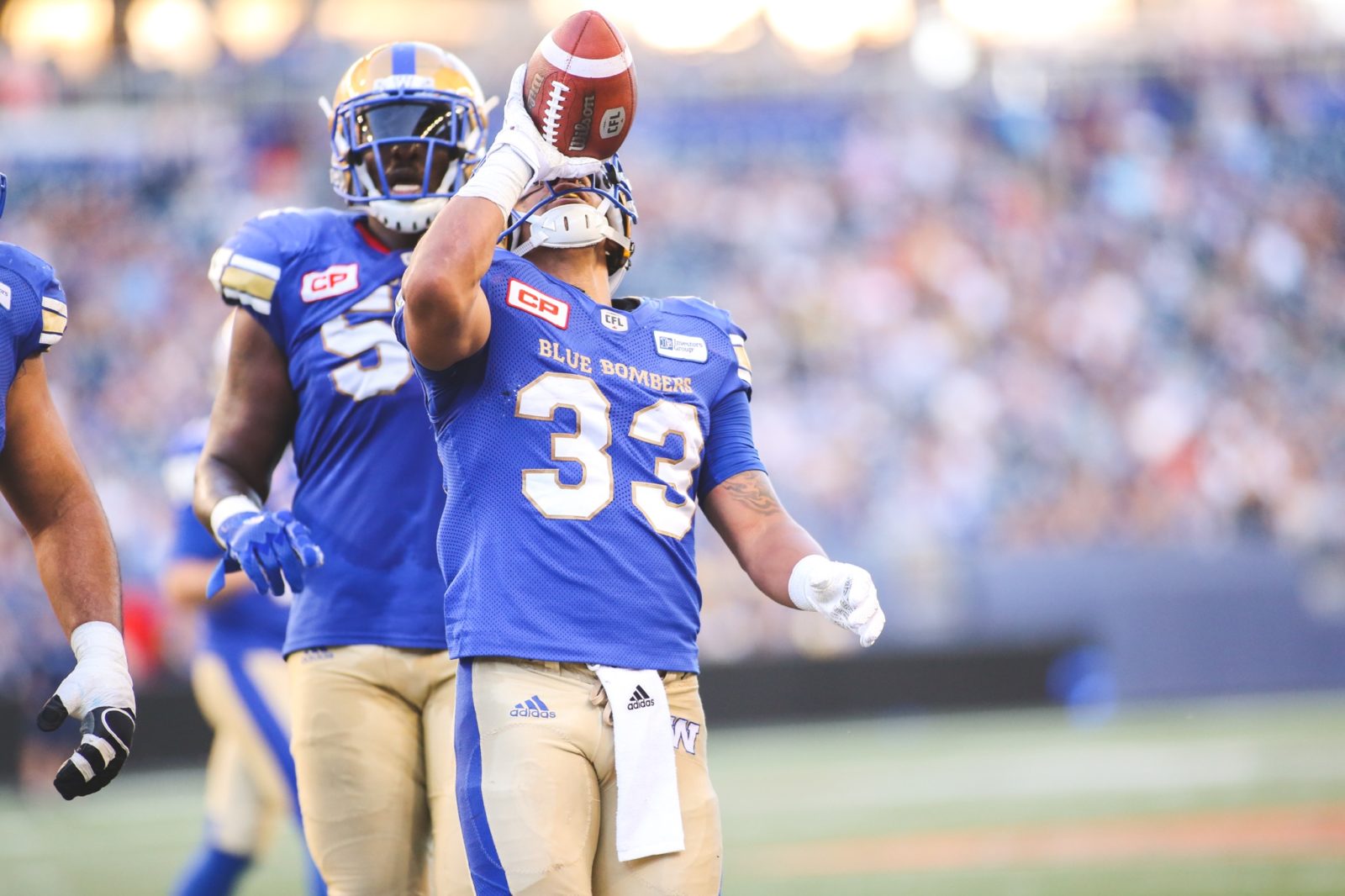 “One thing, because I want to say it,” said O’Shea, “Andrew is the type of guy, you want to get on his back. You want to have him carry the team. He’s a special back.”

The Bombers spoke all week about establishing the run because of the balance it brings to their attack. It also allowed an offensive line that had been very critical of their own performance through two weeks to tee off on an Argonauts defensive front that came into the game hyped as a quarterback-sack machine after piling up 14 through their first three games.

“That’s the focus of every team in the league… you want to be able to run the ball because it keeps them off balance,” said Nichols, who finished the night 20 of 36 for 228 yards with no TDs or interceptions. “We were able to do that tonight. Andrew had some tough runs, our O-line did a great job tonight against a team that is leading the league in sacks. We didn’t give up a single sack tonight and a lot of the credit should go to Andrew and our offensive line for the job they did against that front.

“There were so many times after I hand the ball off and I see (Harris) almost go down, and I’m thinking in my head ‘we’re going to be in second-and-10’ and all of a sudden he pushed forward for four more yards and dives forward. He claws for every yard because they know they make a big difference.”

The Bombers opened the game with a Ka-Boom!, as Ryan Lankford took the opening kickoff 105 yards to give the home side a 7-zip lead before the game was 13 seconds old.

But Winnipeg’s kick-cover units also struggled early, as Martese Jackson returned a punt 78 yards for a score and had another kickoff return score spiked after a penalty.

Trailing 22-20 at the intermission, the Bombers tightened up in the final 30 minutes defensively. Big in the ‘W’, as always, was kicker Justin Medlock, who went four-for-four in the field goal department, including a 55-yard bomb late in the second quarter.

But it was the work of Harris and the O-line that was massive in grinding out the win. One of his runs in the second half in particular, was the perfect representation of how field position was to come by against the Argos ‘D.’

“I had a two-yard gain in the fourth quarter that was probably the hardest two yards I’ve ever had in my life,” said Harris with a smirk. “It’s everything (to be able to establish the run). It’s demoralizing for a defence, I can tell you that much.

“We want to be the dictator in that situation and definitely take it to them. It’s a week-to-week thing and we’ve got to be consistent.” 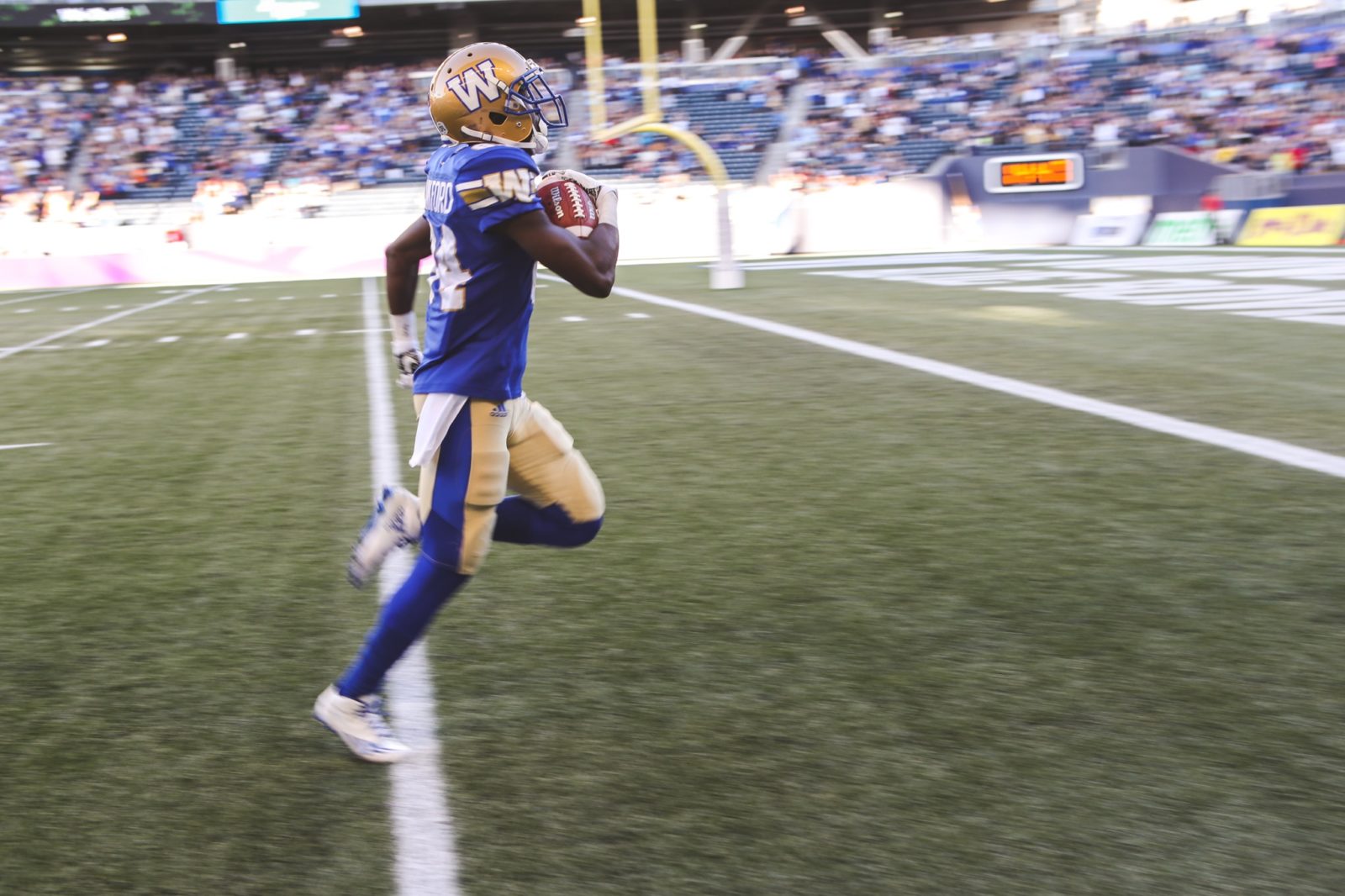 0: Points scored by the Argos in the fourth quarter. In the win over Saskatchewan, the Bombers surrendered 14 points in the final 15 minutes and gave up 10 against Calgary in last week’s loss.

Ryan Lankford’s opening kickoff return marked the first time a Bombers player had taken the first touch of the game to the house since Markus Howell did against the Argos on Sept. 9, 2000.

28: Justin Medlock was a perfect 4-for-4 on the night, pushing his club-record consecutive streak to 28, dating back to last season.

T.J. Heath exited the game late in the first half after injuring himself while tackling former U of M Bisons star Anthony Coombs. He was replaced by rookie Brian Walker, but returned in the second half and made a critical interception at the end of the game… LB Jesse Briggs was also injured in the first half with what the club called a lower-body injury and did not return.

263 – Combined kick-return yardage by Martese Jackson in the FIRST HALF Thursday night.

0 – Sacks surrendered by the Bombers Thursday, their first clean sheet of the season.

109 – Receiving yards by Weston Dressler, most of any player.

10 – Combined field goals in the game – four by Medlock and six by former Bomber Lirim Hajrullahu, who was a perfect 6-for-6.

4 – Interceptions by T.J. Heath through three games, most in the CFL.

“I thought it was pretty exciting games for the fans. There’s lots of room for improvement… our special teams aren’t going to enjoy the film session tomorrow, aside from the opening kick return. There’s reasons for it, there will be answers and corrections and everything will be ironed out again.

“I thought our O-line did a helluva job against a front that’s been getting a lot of press. Matt Nichols wasn’t sacked and he did a great job of getting rid of the ball, the receivers got to the right places at the right time.” – Mike O’Shea