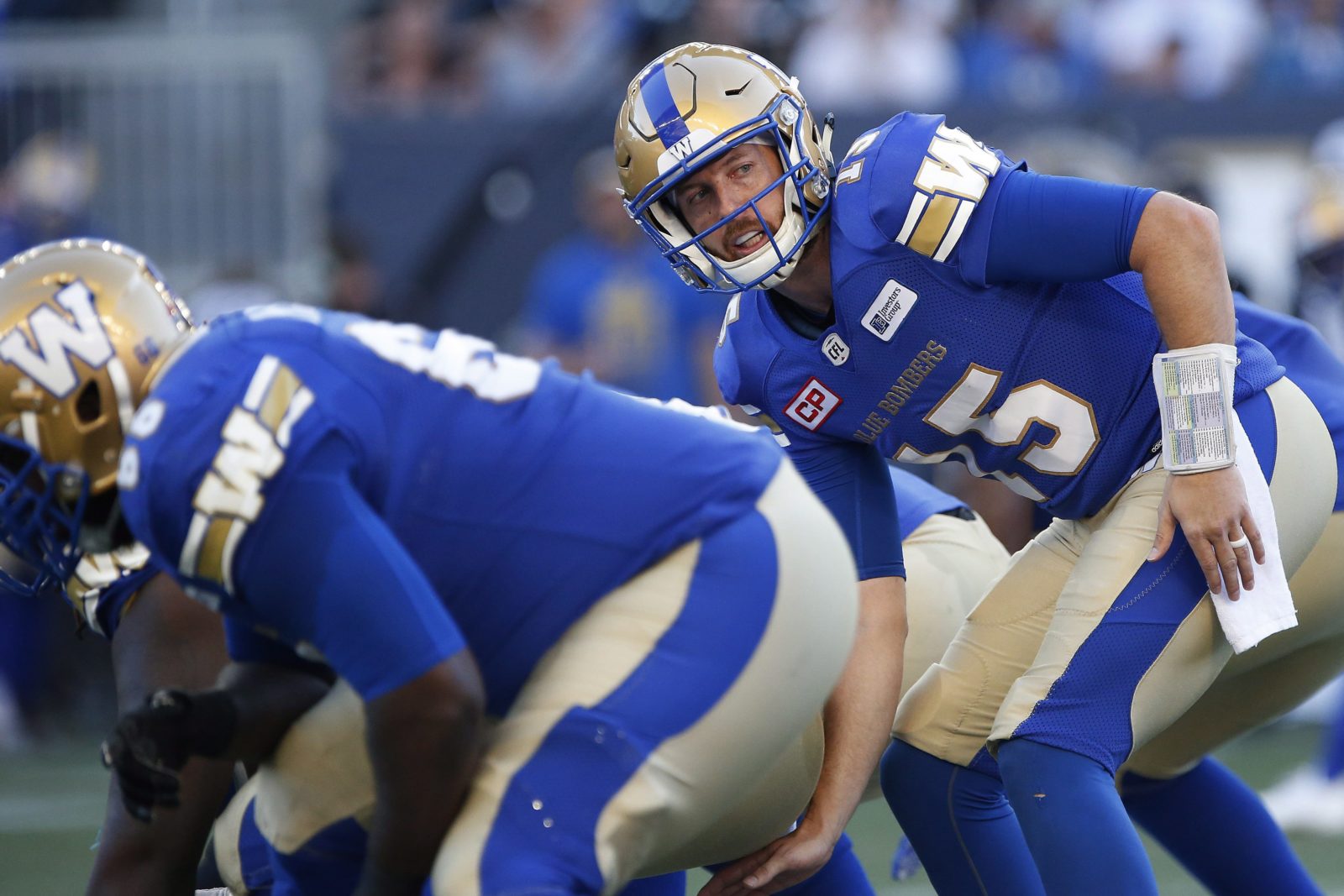 Winnipeg Blue Bombers quarterback Matt Nichols (15) gets set for the ball during first half of CFL action against the Calgary Stampeders in Winnipeg Friday, July 7, 2017. THE CANADIAN PRESS/John Woods

It is a horror movie playing out on a continuous loop. Same storyline and with many of the same characters spitting out the same dialogue.

And for the Winnipeg Blue Bombers, the same-old, same-old result.

The Calgary Stampeders did what they always seem to do here in the Manitoba capital Friday night, namely beating up the home side in a 29-10 victory and disappointing an Investors Group Field crowd of 30,165.

The loss drops the Bombers to 1-1 with the Toronto Argonauts in town next Thursday.

After the game, Bombers head coach Mike O’Shea was asked about the nine-game home winless run against Calgary and a stretch that includes 17 losses in the last 18. 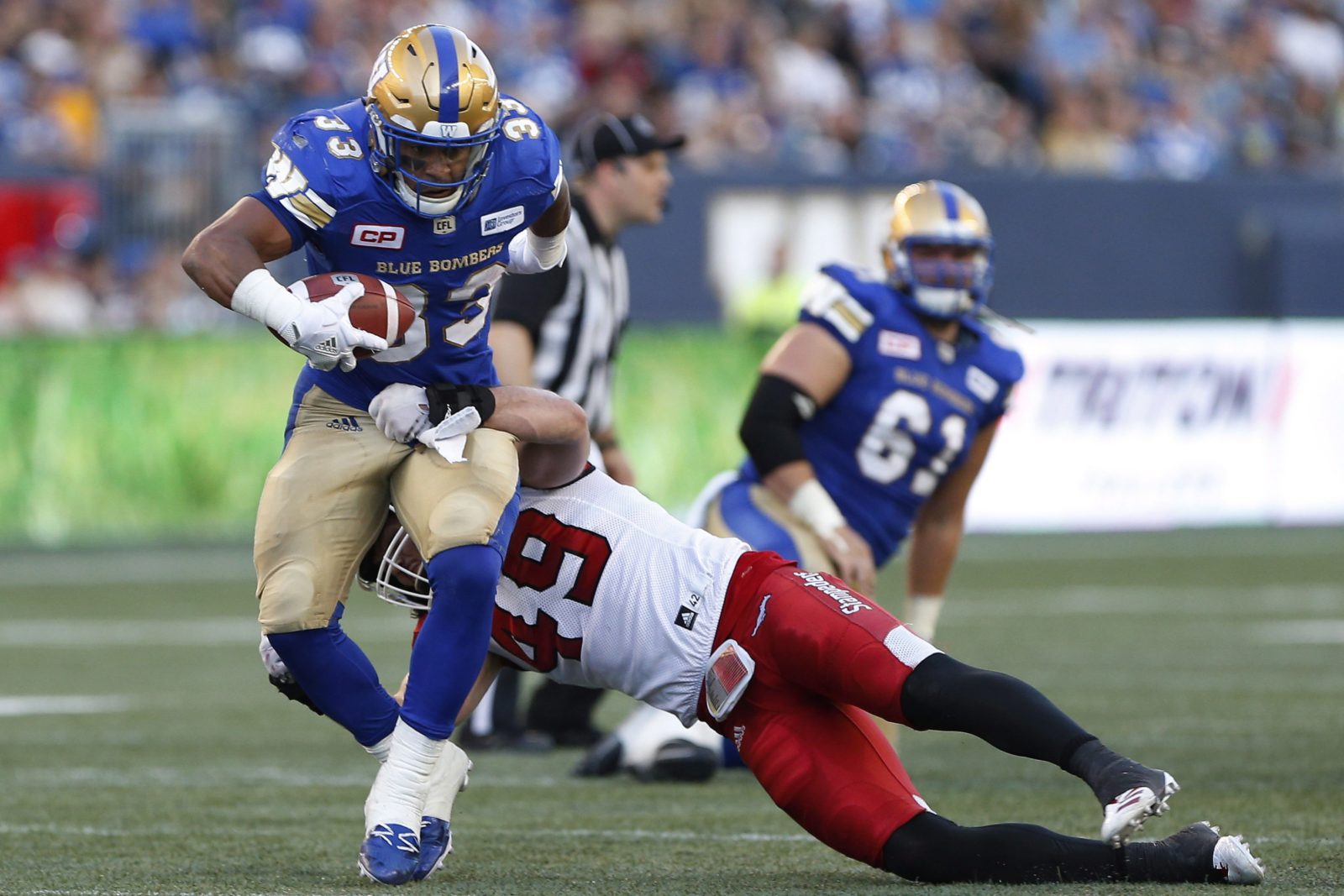 “But I don’t think our guys are that weak that they need that. In terms of this historical… you don’t gameplan history. You gameplan the team you’re playing that night, not the teams that won for ‘X’ number of years. It’s impossible.”

The Bombers led 10-9 at the intermission despite turning the ball over three times before the game was 16 minutes old – an end-zone interception by Josh Bell, a turnover on a third-and-inches gamble, and a fumble by Ryan Lankford on a missed field goal return.

But the defence stiffened, limiting Calgary’s high-octane offence to nine points and getting in Bo Levi Mitchell’s grill just enough to limit him to just 107 yards on seven of 15 pass attempts while intercepting the CFL’s Most Outstanding Player twice.

But Mitchell and his band of brothers were on target in the second half as he finished the night 22 of 34 for 332 yards, with a TD strike to Kamar Jorden – his second of the night, the other coming on a third-down end around from the one yard line – as the visitors out-scored the home side 20-nil in the final 30 minutes.

“They’re a stout defence, but all in all though, we probably shot ourselves in the foot more than they out-manned us,” said Bombers running back Andrew Harris. “This was definitely a learning experience. We got it back in the second half and looked like we had the momentum, but unfortunately we turned the ball over.”

“I think we beat ourselves tonight. Calgary played great, but I really think the Blue Bombers beat themselves tonight. Turnovers, missed assignments… everyone was taking turns. I missed a block in the first drive and got Matt (Nichols) hit and everyone made mistakes tonight.”

Critical in the Stamps’ second-half turnaround was a 27-yard interception for a touchdown by linebacker Maleki Harris that turned a 12-10 Calgary lead into a 19-10 advantage.

Nichols, who completed 27 of 40 for 267 yards and hit Julian Feoli-Gudino for the offence’s only TD, was obviously lamenting his two mistakes afterward.

“I felt like I was seeing it really well, I just made two bad throws,” said Nichols. “It’s something I focus on, to not turn the ball over, and I did it twice tonight. That’s how you lose football games against good teams.

“I’m fully putting this one on my shoulders. I can handle it. I’ve been through worse. I’m going to get right back to work and get ready for Toronto.”

“I don’t use that word ‘blame’,” added O’Shea. “There’s lots of guys in that room who would like some plays back. Blame… there’s going to be 44 guys in there who know they could have done something differently.”

The Bombers finished the night with five turnovers and -4 in the turnover ratio. But most of the frustration afterward was about all the self-inflicted wounds.

“I’m getting tired of it. We’ve just got to play better. We can’t make mistakes against a good team and they capitalized on them.” 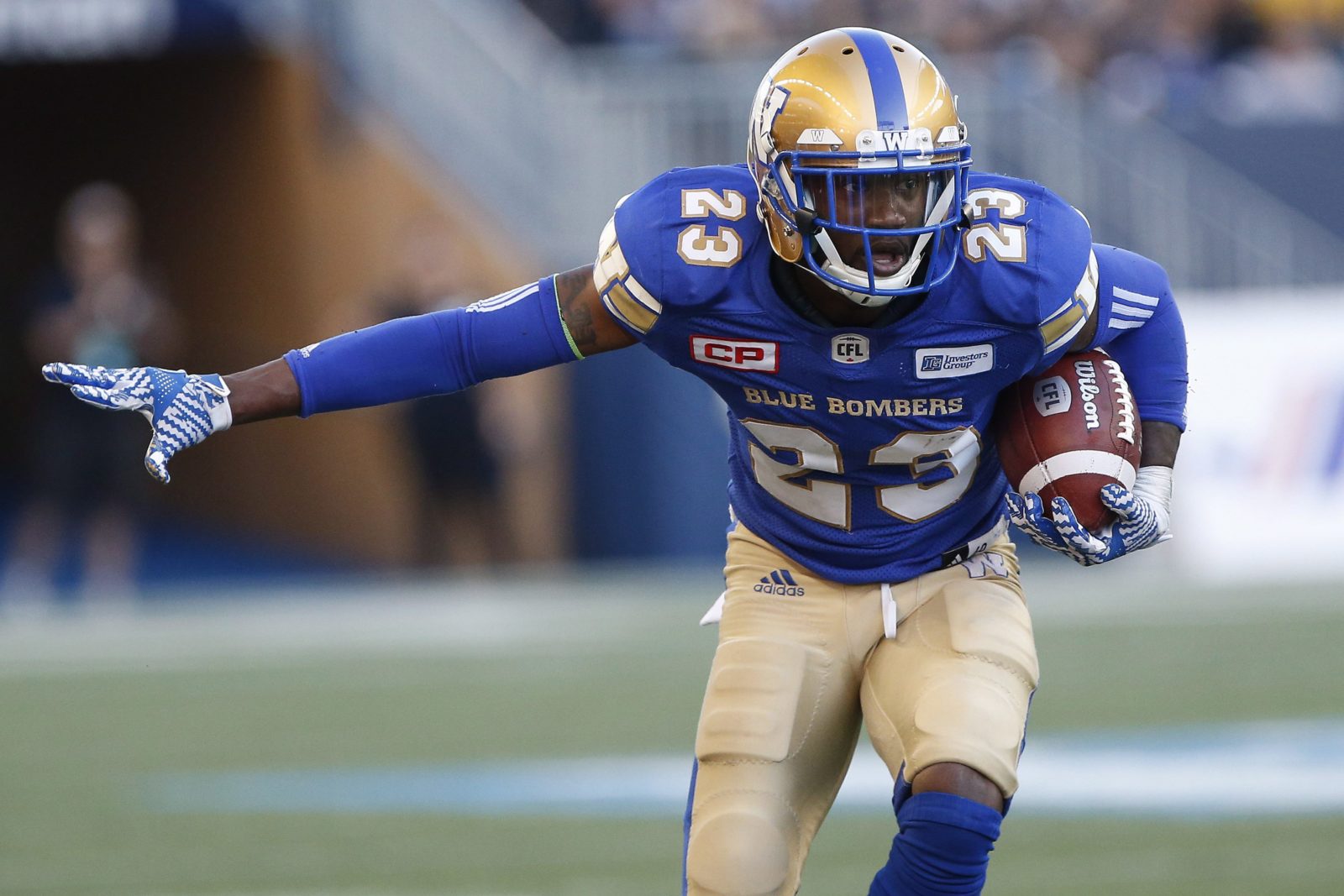 5: Turnovers by the Bombers – two interceptions, two on downs, and one fumble.

The Bombers are now winless in their last three home openers. The last time Winnipeg won their first home game of the season was 2014 in a 45-21 victory over Toronto.

Bombers receiver Clarence Denmark played in his 100th career CFL game Friday, all with Winnipeg… Weston Dressler had 76 yard receiving on six receptions, giving him exactly 9,000 yards in his career.

Bombers linebacker Ian Wild exited the game early in the third quarter with an upper body injury and did not return. Jesse Briggs stepped in to replace him at the weak-side linebacker spot… DE Tristan Okpalaugo did not finish the game either, after exiting in the fourth quarter. He was on the sidelines in his gear still as the final gun sounded.

24: Justin Medlock made his only field goal attempt of the night, pushing his club record consecutive streak to 24, dating back to last season.

0-7: Matt Nichols career record against the Stamps; 0-3 as a Bomber.

19: Career passing TDs by Mitchell against the Bombers, more than his totals against any other CFL team.

2: Interceptions by T.J. Heath, giving him three on the season.