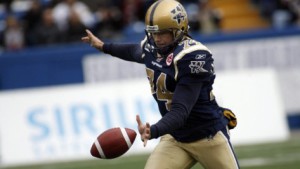 He’s a Manitoba product and his impression on the football team over the last three decades has been significant. Westwood could kick, that’s for sure, but was also a bit of a renaissance man during his playing days, trying his luck as a boxer, dancer, race-car driver and singer.

He retired as the Bombers’ all-time leading scorer with 2,748 points and holds numerous career marks for field goals. Westwood, now a fixture on sports radio with TSN 1290, was always clever when staring into a camera or speaking to reporters and his comments about Saskatchewan Roughriders fans back in 2003 were the spark that gave us the Banjo Bowl