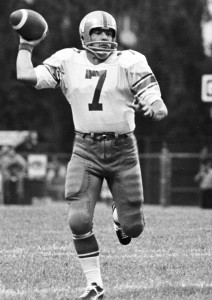 The Blue Bombers were suffering through some sour years when Don Jonas arrived in 1971, and  he was the man who helped make the club sexy again. Jonas was the first Bomber to win the CFL’s Most Outstanding Player Award – seems ridiculous, given the likes of Ken Ploen and Leo Lewis back in the day – but he helped lead masses back onto the bandwagon.