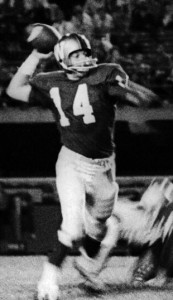 ‘Tricky’ Dick Thornton began his CFL career with the Bombers in 1961 and over the course of a decade-plus in the CFL – the last seven years with the Toronto Argonauts, before he finished with the Memphis Southmen of the World Football League – he became one of the most colourful men in pro football. He wore his hair long and sported an earring and Fu Manchu moustache when most of his teammates were buttoned-down. And during his days in Winnipeg – where he became known as an outstanding defensive back – he decided he wanted to play quarterback and hired a kid to run through the bleachers with a sign that read ‘Thornton for Quarterback’. Bud Grant didn’t budge, FYI.