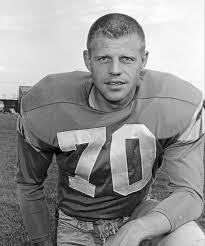 A born-and-raised Winnipegger, Norm Rauhaus attended Kelvin High School and played his junior ball with the Weston Wildcats before turning pro with his hometown Blue Bombers in 1956. Rauhaus would play 12 years for the Bombers and was part of four Grey Cup championships.

He made an immediate impact, too, as he was the West Division’s top Canadian rookie in 1956 and the Bombers top Canadian five years later, in 1961. Rauhaus is remembered for being a versatile and reliable player who also made one of the key plays in the 1958 Grey Cup win when he recovered a punt block in the end zone on the last play before halftime in what turned out to be a pivotal momentum changer. He retired with 34 interceptions – first on the Bombers all-time list until it was eclipsed by Rod Hill in the 1990s. Rauhaus’ totals still rank second.