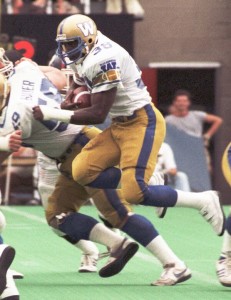 Willard Reaves came to Winnipeg in 1983 in a trade with the Edmonton Eskimos and it could be considered one of the best swaps in Bombers history. The club sent a first-round draft pick in 1984 (Chris Skinner) and future considerations to the Esks for Reaves, running backs Sean Kehoe and Scott Stauchand and defensive back Steven Hall.

Reaves was not only the Bombers leading rusher in each of his five years with the club – he is still third on the all-time list behind only Leo Lewis and Charles Roberts – he was the West Division’s top rookie in 1983 and the CFL’s Most Outstanding Player a year later. Along the way Reaves, working behind a dominant offensive line he nicknamed ‘The White Horses,’ set a club record with 1,733 yards rushing in 1984 (passed by Robert Mimbs in 1991) and posted 26 100-yard rushing games in his 62 contests as a Bomber.