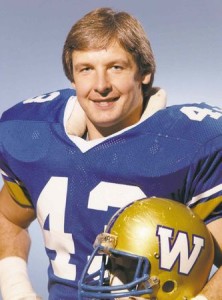 John Bonk began his career in Hamilton with his hometown Tiger-Cats, moving from the Burlington Braves junior team to earning a spot with the Tabbies as a linebacker. He was traded in 1973 to the Bombers for defensive back Peter Ribbins and started his days here as a linebacker before being switched to the offensive line. It was a brilliant decision, as Bonk morphed into one of the greatest linemen in Bombers history. Four times he was named the club’s top offensive lineman and, in 1984, he was honoured as the CFL’s best. A gifted long-snapper, Bonk pounded it out in football’s trenches and never missed a game in an 11-year stretch from 1974-84. After his retirement, Bonk served as a colour analyst on Bomber radio broadcasts on CFRW before working in sales and as a consultant.