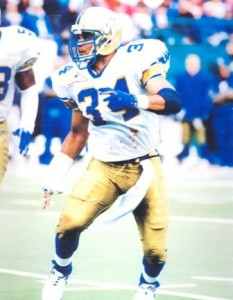 Member of the Canadian Football Hall of Fame (Inducted 2007)

Greg Battle, simply put, walked softly and carried a big hit during his two tours with the Bombers. Seldom heard off the field on a defence that included the likes of Tyrone Jones, James West, Rod Hill, Less Browne and others, Battle did all of his talking between the white lines. An exceptional athlete, Battle was a ferocious hitter, but quick enough to drop into pass coverage and, when the ball was in his hands, he was as slithery as a running back. He finished his career third on the CFL’s all-time tackles list with 766. His work in the 1990 Grey Cup – where he had four tackles and two interceptions, one of which was returned 56 yards for a touchdown – was one of the greatest defensive performances in CFL history. Battle left the Bombers in 1994 for the expansion Las Vegas Posse and then bounced to the Ottawa Rough Riders, Memphis Mad Dogs and Saskatchewan Roughriders before finishing his career in Winnipeg.