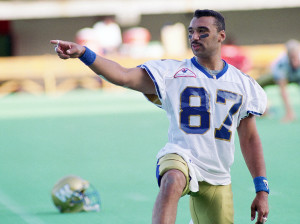 Gerald Wilcox was the first overall pick, by the Ottawa Rough Riders, in the 1989 CFL Draft but was battling injuries when he was traded to Winnipeg during training camp in 1992 for Less Browne.

He was a two-time finalist for the CFL’s Most Outstanding Canadian Award, winning in 1994.

Injuries limited him to just four games in 1996, and in 1997, under new head coach Jeff Reinebold, he was traded to Calgary during training camp for offensive lineman Franco Rocco and the rights to running back Dick Tyler. Wilcox played only two games with the Stamps before retiring. In 2001, he was inducted into the Winnipeg Football Club Hall of Fame.