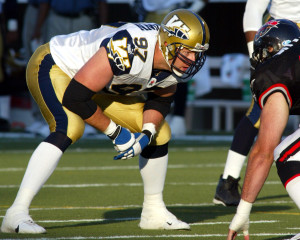 Originally drafted by the Calgary Stampeders, Brown headed south first and suited up for both the Washington Redskins and Buffalo Bills. And when it came time to return to Canada, a contract dispute with the Stamps saw the Bombers pull off one of the greatest trades in franchise history, landing Brown for first and third-round draft picks (the first rounder turned out to be Jon Oosterhuis, who never played for Calgary but found a home here and became one of Brown’s best friends).

Brown was a force from the interior of the defensive line, named to the CFL All-Star Team seven times and the league’s top Canadian in 2001.