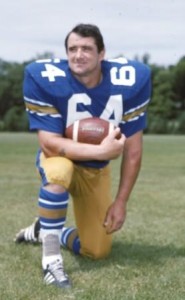 Bill Frank began his pro career with the B.C. Lions in 1962 and played there until 1964 when he suited up for four games with the Dallas Cowboys (who had drafted him in 1963). He returned to the CFL in 1965 with Toronto and then spent eight years with the Bombers. He was dominant during his days with the Bombers, including winning the team’s Most Outstanding Player Award in 1970.