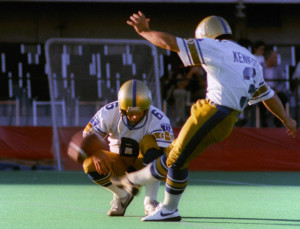 Trevor Kennerd retired as the Bombers all-time leading scorer with 1,840 points (since passed by the man who followed him, Troy Westwood) after 12 seasons. Initially signed as a free agent after a college career at the University of Alberta, Kennerd would crack the 100-point mark in 11 of his 12 seasons. Kennerd now runs his own marketing firm, TKM Inc., and is an Honourary Colonel for 435 Transport and Rescue Squadron at 17 Wing Winnipeg.