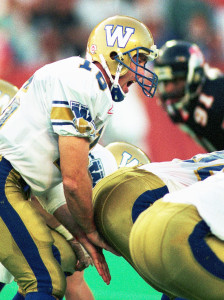 Matt Dunigan had already been a member of three CFL teams by the time he arrived in Winnipeg in 1992, having started his CFL career in Edmonton before moving on to B.C. and then leading Toronto to a Grey Cup in 1991.

He brought a certain swagger to everything he did and, although he battled injuries during his three years in Winnipeg, filled the skies with long bombs and howitzer-shots over the middle. He did more than pass for 713 yards in one game against Edmonton in 1994, he helped create a buzz about the Bombers again after years of the team being dominated by its defences.

Unfortunately, while Dunigan and Danny McManus led the club to a Grey Cup appearance in 1992, they fell short against Doug Flutie and the Calgary Stampeders. A year later, Dunigan was on crutches as the Bombers fell in the 1993 championship to Edmonton. And the 1994 Bombers – as good a squad as has ever been fielded in these parts – fell short in the 1994 divisional final when they lost to the all-American roster of the Baltimore Stallions.