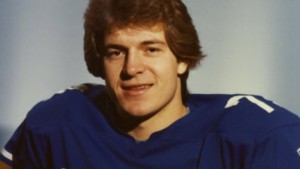 Joe Poplawski – ‘Joe Pop’ to his legions of friends and fans – remains one of the most popular players in Bomber history. Originally a territorial exemption by his hometown Edmonton Eskimos, Poplawski was traded to the Bombers before playing a game in 1978 for all-star receiver Tom Scott.

Poplawski immediately made the trade a win for the Bombers, earning the CFL’s Most Outstanding Rookie award in ’78 and then the league’s top Canadian honours in 1981 and 1986. He was a CFL all-star five times in nine years and, when he retired after the 1986 season at the age of 29, he was 20th on the league’s all-time receiving yardage list. He still ranks third on the Bombers’ all-time list, ranking behind only Milt Stegall and James Murphy.