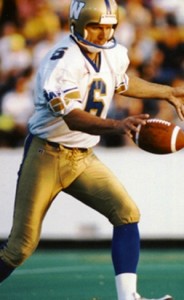 Bob Cameron’s story is as much about perseverance as it is about longevity. He set the CFL record for consecutive games, dressing for 353 in a row and playing until he was 48 years old – all this after being cut countless times before landing a home with the Bombers. He was a quarterback during his college days at Acadia – he won the Hec Crighton Trophy as the top player in the country in 1976 – and holds the majority of the CFL’s punting records.