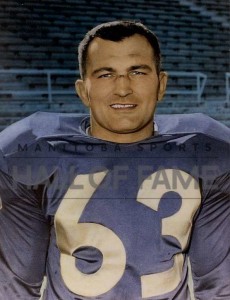 Steve Patrick was a fixture in this community for years, both as a Bomber and after his playing days. A graduate of the Winnipeg Light Infantry juniors, Patrick joined the Bombers in 1952 and suited up for 290 games over 13 years, winning four Grey Cups along the way. He was good, too, twice being named an all-star and participating in the 1957 and 1958 CFL All-Star Games.

Before the end of his playing days, Patrick began serving in politics as an MLA (Member of the Legislative Assembly), first being elected in 1962 and winning again in 1966, 1969 and 1973. Two of his sons, Steve Jr. and James, played in the NHL, while his daughter Tara played university volleyball. His grandson Nolan plays for the Brandon Wheat Kings and is expected to be selected first overall in the 2017 NHL Draft.