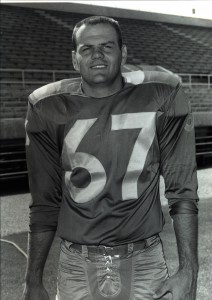 Frank Rigney followed University of Iowa teammate Ken Ploen to Winnipeg, arriving in 1958 at the start of the franchise’s run of four Grey Cup titles in five years.

A draft choice of the Philadelphia Eagles, Rigney chose the Bombers instead and was a seven-time West Division All-Star, a CFL All-Star three times (the CFL didn’t begin selecting league-wide stars until 1962) and the league’s Most Outstanding Lineman in 1961.

After his retirement, Rigney became a highly respected and popular analyst on CFL telecasts on both CBC and CTV and covered the 1980 and 1984 Winter Olympics.