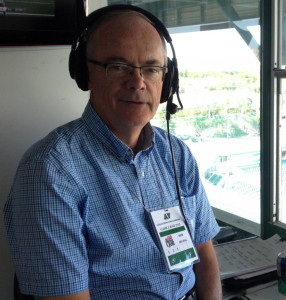 The man affectionately known as ‘Knuckles’ has been the voice of the Bombers for eons, beginning at CJOB in 1973 and describing the action more or less since 1974.

A distinguished and respected play-by-play man – those in the business rave about his call of a game – Irving has long been a passionate supporter of the Canadian Football League.

The press box at Investors Group Field—the Bob Irving Media Centre – is named in his honour, and he is a member of the Manitoba Sportswriters and Sportcasters Media Roll of Honour (1995), the Football Reporters of Canada wing of the Canadian Football Hall of Fame (1997) and was made a member of the Order of Manitoba in 2014.

In 2015, Irving was presented with the Hugh Campbell Distinguished Leadership Award, presented annually by the CFL to the ‘individual who has strengthened the league, Canadian football, along with solidifying their place in Canada’s sports culture.’