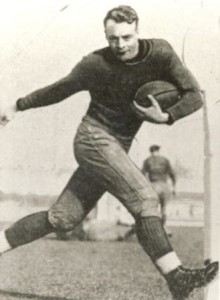 Russ Rebholz came to Winnipeg as one of Canada’s first import players after playing in Japan and starring at the University of Wisconsin in both football and basketball. He first joined the St. John’s Rugby Club in 1932 before signing with the Winnipeg Football Club. Nicknamed ‘The Wisconsin Wraith’ while with the Bombers, he was both a player and coach and was known for his abilities to kick and pass. He threw two TD passes in Winnipeg’s 1935 Grey Cup championship.

He returned to Wisconsin after his playing days and turned to coaching but in basketball. He had a .539 winning percentage at the University of Wisconsin-Milwaukee between 1952 and 1963.