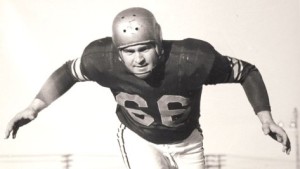 Robert (Buddy) Tinsley came to Canada after playing his college ball at Baylor in his home state of Texas, after a year with the Los Angeles Dons of the All-American Football Conference and following a contract dispute with the Pittsburgh Steelers.

And despite getting offers to return from the Steelers, Philadelphia Eagles and other NFL teams, Tinsley not only opted to stay in Winnipeg, but made it his home until he passed away in 2011.

He was dominant on both sides of the ball, five times an all-star on the offensive line and twice at defensive tackle, and was a team captain in 10 of his 11 years with the Bombers. Many remember him for the story, now folklore, of the 1950 Grey Cup – the ‘Mud Bowl’ – when it was said that an official saved Tinsley from drowning when he was motionless and face down in the mud and water – a tale he insisted was exaggerated.