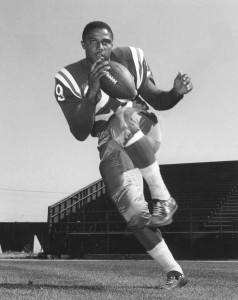 He was nicknamed ‘The Lincoln Locomotive’ dating back to his days at Lincoln University in Missouri and continued to live up to the moniker during his 12 years in Winnipeg by running through, around and past would-be tacklers.

A sixth-round draft choice of the Baltimore Colts in 1955, Lewis came to Winnipeg instead because the Blue Bombers were offering around $3,000-4,000 more. He would appear in six Grey Cups and be a part of four championship teams before retiring in 1966 after a knee operation.

Lewis, who passed away in 2013 at the age of 80, was such a dominant running back and returner during his days the legendary Bud Grant – a man who coached the Minnesota Vikings to four Super Bowl appearances – referred to him as the greatest player he ever coached. He remains, some 40 years after his last snap, the Bombers all-time combined yardage leader.