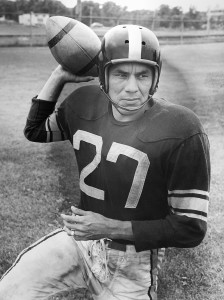 The Bombers were a mess when Jack Jacobs arrived in 1950, already with six years in the NFL under his belt with Cleveland, Washington and Green Bay. Signed for $6,000 to be the club’s quarterback and kicker, Jacobs was a gifted passer who drew thousands to the old Osborne Stadium and led to the construction of Winnipeg Stadium at Polo Park – dubbed ‘The House that Jack Built.’

After his retirement following the 1954 season, Jacobs served as a scout for the Bombers and then was an assistant coach with both Hamilton and Montreal.