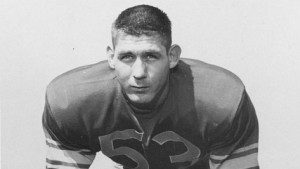 An All-American at the University of Texas, Gray came to Winnipeg in 1955 after being drafted by the Baltimore Colts but heading north instead.

Gray played both offence and defence for the Bombers as a guard and an end and was an all-star on both sides of the ball. In 1960, he became the first defensive player to capture the CFL’s top lineman award. In 1980, he was named the Bombers top defensive player for the first half century of the franchise’s existence, was a team captain in nine of his 10 years in Winnipeg and is a member of the Canadian Football Hall of Fame, University of Texas Hall of Honor, Winnipeg Football Club Hall of Fame and Manitoba Sports Hall of Fame