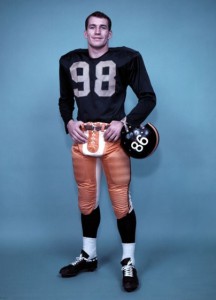 The Gerry James story has been made into a book, but is certainly worthy of a movie as well. A product of Kelvin High School, James – nicknamed ‘Kid Dynamite’ as his father Eddie ‘Dynamite’ also played for Winnipeg – was wearing a Bomber uniform when he was just 17. Four years after that, he made his National Hockey League debut as a member of the Toronto Maple Leafs. That ability to shine in both hockey and football made him one of the greatest athletes in Canadian history.

James played 11 years for the Bombers, leading them in scoring in three years and in rushing in three seasons. He still ranks fourth on the club’s all-time touchdown list behind only Milt Stegall, Charles Roberts and Leo Lewis, and fifth on the all-time scoring list after Troy Westwood, Trevor Kennerd, Stegall and Bernie Ruoff.