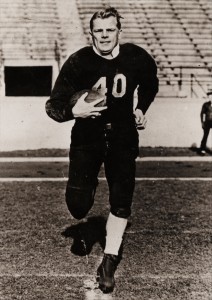 Melvin ‘Fritz’ Hanson was the Winnipeg Football Club’s first superstar, coming north to Manitoba via North Dakota State and his hometown of Perham, Minnesota in 1935 as one of the first imports of Canadian football. He was paid a handsome sum of $125 per game and given free room and board. He was instrumental in putting the ‘Winnipegs’ and later the Blue Bombers on the map.

Hanson was just 5-foot-7 and weighed only 145 pounds but frustrated tacklers with his speed and agility, all the while earning nicknames like ‘The Perham Flash’, ‘The Dipsy Doodle Dandy’, ‘Twinkle Toes’ and ‘The Galloping Ghost.’

The 1935 Winnipegs were the first team from Western Canada to capture the Grey Cup and Hanson was the star of that game, finishing with 334 yards in kick returns, including a 78-yard punt return for the winning score. Hanson was also part of the Bombers championships in 1939 and 1941 and later with the Calgary Stampeders in 1948.

Hanson was a charter member of the Canadian Football Hall of Fame (1963) and the Winnipeg Blue Bombers Hall of Fame (1984) when both shrines were opened and was the winner of the Lionel Conacher Award in 1939 as Canada’s Male Athlete of the Year.