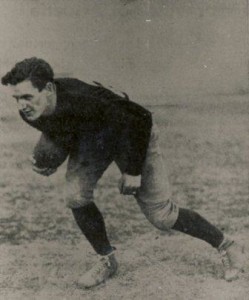 He was nicknamed ‘Dynamite’ – his son Gerry, who also played for the Bombers, would be known as ‘Kid Dynamite’ – and James was an explosive two-way player for the club in the early days.

He began his career with the Regina Pats and Roughriders before moving to Winnipeg to play with St. John’s College in 1932. He was a member of the Winnipegs in 1935 – the first Western-based team to capture the Grey Cup – and was one of the first inductees into the Canadian Football Hall of Fame. The leading rusher in the West Division is annually awarded the Eddie James Memorial Trophy.