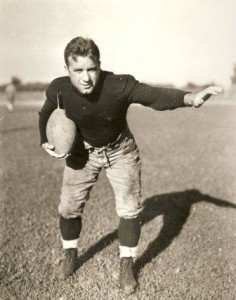 Carl Cronin came to Winnipeg as its first ‘import.’ A product of the powerhouse University of Notre Dame and in his two years with the football club – in the days before they were known as the ‘Blue Bombers’ – played halfback, wide receiver, linebacker and also coached the team. As Jack Matheson wrote in his ’60 Years and Running’ historical book on the Bombers published in 1990, Cronin ‘did everything but the team laundry’ while guiding the club to a 3-3-1 record in the regular season and 3-1 in the playoffs, including a Western Final victory over the Calgary Bronks in 1933, the same team he would take over two years later in 1935.