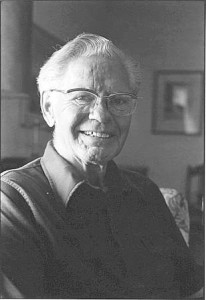 Bud Marquardt came to Winnipeg in 1935 after graduating from North Dakota State University and spent the rest of his life in Manitoba. He helped the Bombers win three Grey Cups – 1935, 1939 and 1941 – and caught a touchdown catch in the ’35 game, the first won by a Western-based team. He was a three-time all-star who played basketball in the winter for the Winnipeg Toilers and worked with the Hudson’s Bay Company until his retirement.