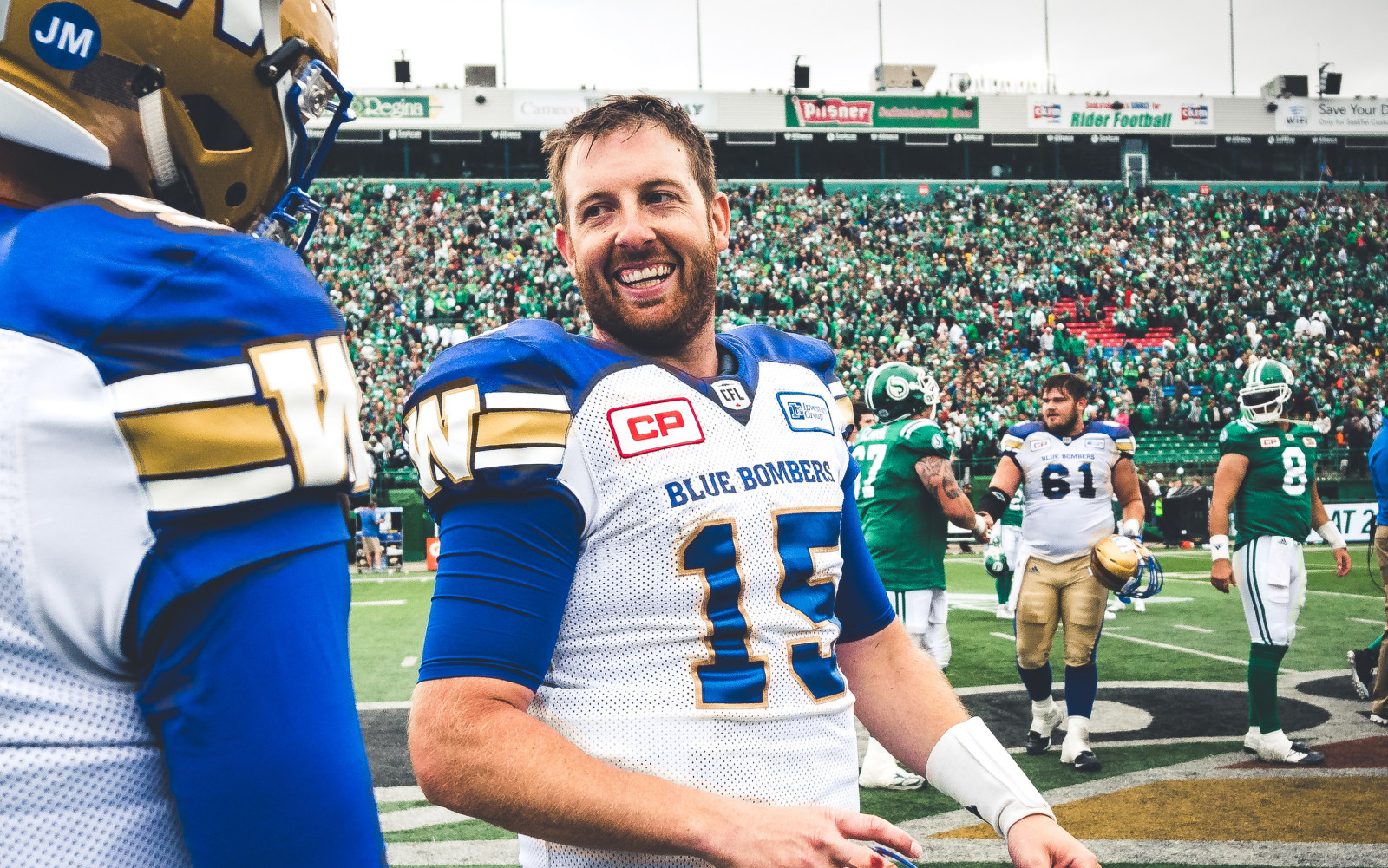 Drew Willy (5) and Matt Nichols (15) after the Labour Day game between the Saskatchewan Roughriders and the Winnipeg Blue Bombers at Mosaic Stadium in Regina, SK. Sunday, September 4, 2016. (Photo: Johany Jutras)

Early in the morning of September 2, 2015, we were in the midst of finalizing a trade with Edmonton for quarterback Matt Nichols. As PR staffs often do when acquiring a player, I asked Edmonton’s Communications department about Matt.

What kind of guy is he?

The answer, of course, was a unanimous and glowing: “great guy”, “easy to work with” etc etc.

Thinking back, since the new trifecta of CEO Wade Miller, GM Kyle Walters, and Head Coach Mike O’Shea has taken over, we don’t really have anything other than those types of guys – anything less wouldn’t fly with those three. But back to Matt – that trade brought us someone I find to be one of the most interesting athletes our organization has seen in a very long time.

Matt came in last week, and as we know, his deal was finalized during his visit: Three years, over a million dollars, and a starting quarterback role. As we drove to Investors Group to speak to the media Wednesday, something struck me as different from what I had experienced with many quarterbacks I’ve worked with prior to Matt.

This guy is different.

As we drove, he made mention of how this contract, although great, means jack if you don’t perform, but the excitement of the day was undeniable.

He read a tweet that stated he is the 7th or 8th best quarterback in the CFL, and that he isn’t worth the money he is being paid. “That’s fine,” he said, clutching his IPhone. “I would respond if I could but what’s the point? All that stuff just fuels me, anyway.”

“I think I’ll always play with a chip on my shoulder. I like it that way.”

See here’s the thing about Matt Nichols; nothing has ever come easy for him. His football career could have ended – twice -with horrible injuries while in Edmonton. We’ve never talked about it, but I’m sure being traded for a late-round draft pick isn’t the best feeling, and yet still, he remains quite possibly one of the most humble players that’s come across our province in a decade.

Wednesday evening, CEO Wade Miller had given us tickets in his suite for the Jets game, so we headed downtown so that Matt could do a radio interview before the game. I made mention we should probably grab some dinner somewhere. Boston Pizza, he suggested? In we went, where the quarterback who had just gotten the biggest payday of his life looked over the menu… “I feel I should get a salad, but….” He decided on a barbecue chicken pizza and a Rickard’s Red, because well, he was going to treat himself.

Armed with his Winnipeg Jets toque, he stood in the suite while the lineup for a picture and a glimpse of the quarterback grew outside the suite door over the intermissions. During the game, wherever we were in the arena, people would come over to congratulate him, but he would turn the conversation to them. One guy was a dentist, another a travel agent. Both intrigued Matt more than talking about his new deal, so much so that some lucky fans even found themselves the recipients of a beer courtesy of the starting QB.

Ok so @Wpg_BlueBombers fans..:minding my own business in YWG and @MattNichols16 buys me a beer. We r so lucky he’s our QB. Bro y da man

Later in the evening, we met up with some friends who were also with hockey broadcaster Dave Randorf, in town to do the TV broadcast of the Jets game earlier in the evening. We sat for maybe an hour, and the next day, I came across this tweet from Dave.

Had a chance to talk w/ @MattNichols16 while in #Wpg @Wpg_BlueBombers fans should be excited. Quality QB. Quality guy. He’s excited to play

That may not sound like anything special, but to me it is, because the more time I spent with Matt last week, the more it became clear he is perfect for Winnipeg. There’s no ego on this guy. No “look at me, I’m the starting quarterback.”

Maybe it’s because it took him so long to get here. Or maybe it’s just the type of guy he is. Maybe a bit of both. He’s just a regular Manitoba dude, and when it’s time to go to work, he punches in the clock with a work ethic and fiery attitude that’s contagious.

There’s no question he’s the right fit for this organization, both on and off the field, and he’s just like one of us.