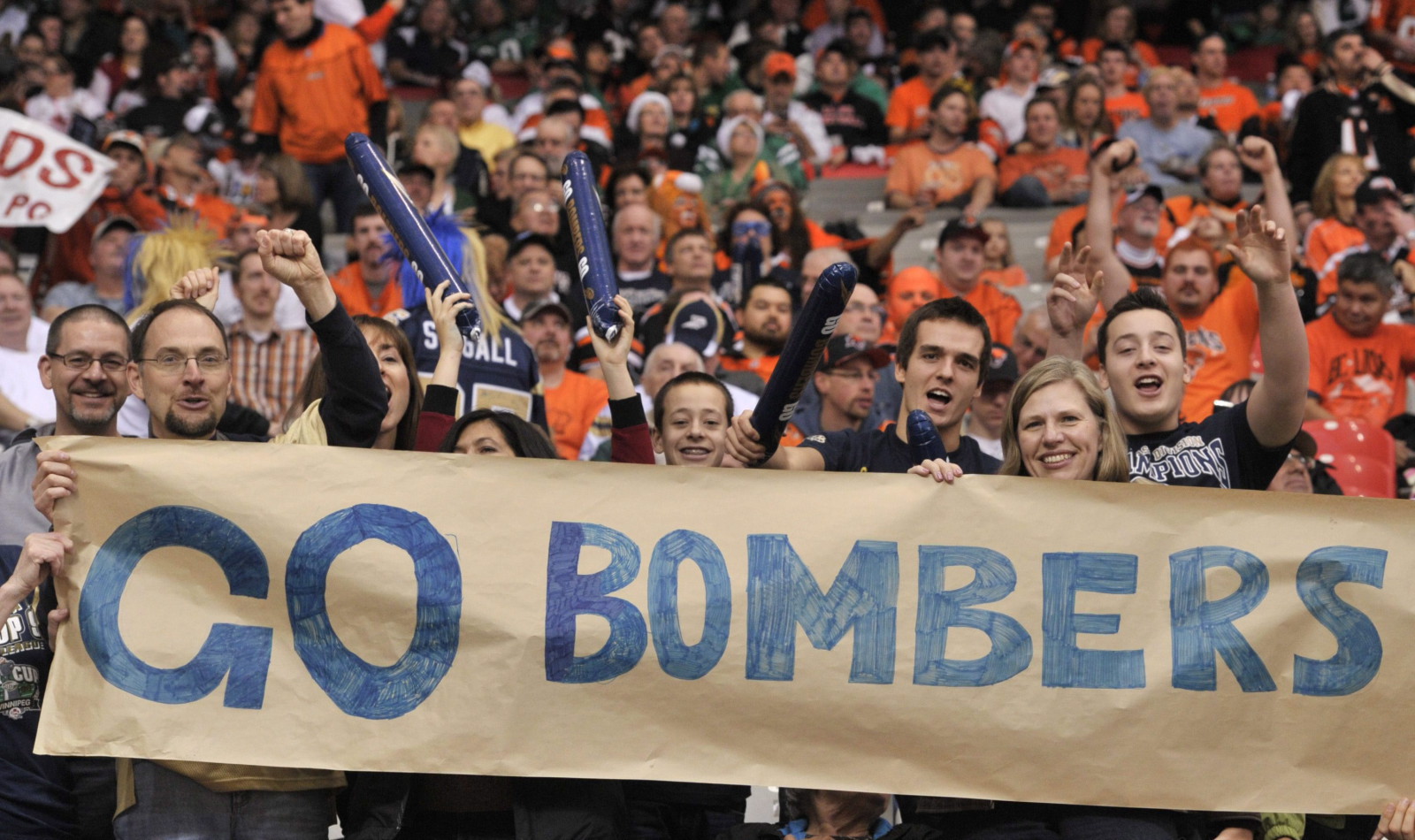 Winnipeg Blue Bomber fans hold up a banner prior to the start of the CFL Grey Cup Sunday November 27, 2011 in Vancouver. THE CANADIAN PRESS/Nathan Denette

Finally, after 1,813 days since our last playoff game, Blue Bomber fans finally get an opportunity to watch this team back in the postseason. Oddly enough, as I write this, I sit in the same hotel, in the same city, on the same floor, as I did in the 2011 Grey Cup.

Four years. I’ll tell you this, in 2011 I sure wouldn’t have thought it would take this long to get back to the postseason, but we couldn’t be more excited.

Andrew Harris, then with the BC Lions, in the 99th CFL Grey Cup Sunday November 27, 2011 in Vancouver.

What a season it has been. Early in the year, much to the dismay of many, I wrote asking for patience, something that seems everlasting here. We knew we had a solid roster and good people, but the early struggles tried their best to break the team.

But that was never going to happen.

A 10-3 finish, an 11-7 record, and a berth in tomorrow’s Western Semifinal. So how did we get here? I could write about the entire roster, because seriously, that’s how. The team has come together like no other I’ve seen before, and every single player has played a key role in this year’s success. But for the sake of brevity, two guys in particular are worth noting.

Andrew Harris: When we signed Andrew, he and I had met a few times over the years, enough for me to send him a text to congratulate him right when we got confirmation, but I can’t say I knew him well. And honestly, making ANY sort of judgments on someone until you spend time with them is a mistake, something I think we’ve all done. Well, this guy may be one of the best pros we’ve had come through this organization in a very long time. He gets it – from preparation, to dealing with the media in both good or bad times. I was curious what it would be like working with him, but damn is our team better now and for the foreseeable future with this guy in our organization, both on and off the field.

Taylor Loffler: When we sat in the draft room in May and GM Kyle Walters said “If he’s there at 19, it’s a no brainer,” I missed who he was referring to. “Loffler, UBC,” he replied. “He’s a damn good football player,” he said to the busy room but nobody in particular. Well, how about Taylor Loffler? Every day he will check to see if he’s been requested for media interviews (it’s not his favourite thing to do), but he sure let’s his play do the talking. Coach has repeatedly said he plays that “old school safety”, and if you’re coming across the middle, you better be ready because he’s waiting for you. In football, most starting jobs are earned by taking advantage of an opportunity due of injury or a coaching change. Taylor did that in week 6, and I think we will be hearing his name for a long time to come.

Funny, as I write about those two. How about Justin Medlock’s record-setting season? Or Darvin Adam’s 700 yards in eight games? Or Moe Leggett’s defensive season? And so on. It’s been quite the year.

Are we paranoid or is this normal?

For the first time in three seasons, Coach O’Shea closed Friday’s practice in preparation for tomorrow’s game. Three out of the four teams playing this weekend did the same thing, closing one of their practices throughout the week. In fact, teams have the option to do it once a week during the regular season, and there are teams who exercise that right.

The reality is this: Football teams want every little advantage possible, and this includes the ability to practice certain things without anyone else being able to watch. Does it mean we don’t want our fans at practice? Of course not. It means we are doing everything we can to win a football game. This is a regular occurrence south of the border as well, and it’s about wins and losses, nothing more. Will it help come ‪tomorrow afternoon? Who knows. But there’s a reason three of the four teams in the Semifinals closed a practice this week.

I’ve been asked a lot lately where this all turned – where did the season change? Was it after week 5 when Coach O’Shea, immediately deciding after the Calgary game at home (and by immediately I mean when I came into his office to discuss his post-game media, he had already made the decision) that Matt Nichols was taking over the following week in Edmonton? Maybe.

But in my opinion, it was the opening drive of that week 6 game in Edmonton. It was the way the team, in some way not even really describable, adopted a mentality on the road that evening. A mentality that has carried us to some impressive road victories. A mentality, in large part, adopted from the leader in the huddle, Matt Nichols.

Many players have spoken highly of Matt’s ability to motivate his team, lead by example, push them and give them a sense of control and urgency. As Weston Dressler said just this week, “There’s a contagious fire to him. You see outside of football and then when he’s on the field… there’s a fire in his eye and something special comes out of him. And all the guys have jumped on board.”

Thanks for sticking with us through a tough start this season, let’s get a win tomorrow and see a bunch of Bomber fans in Calgary next week.