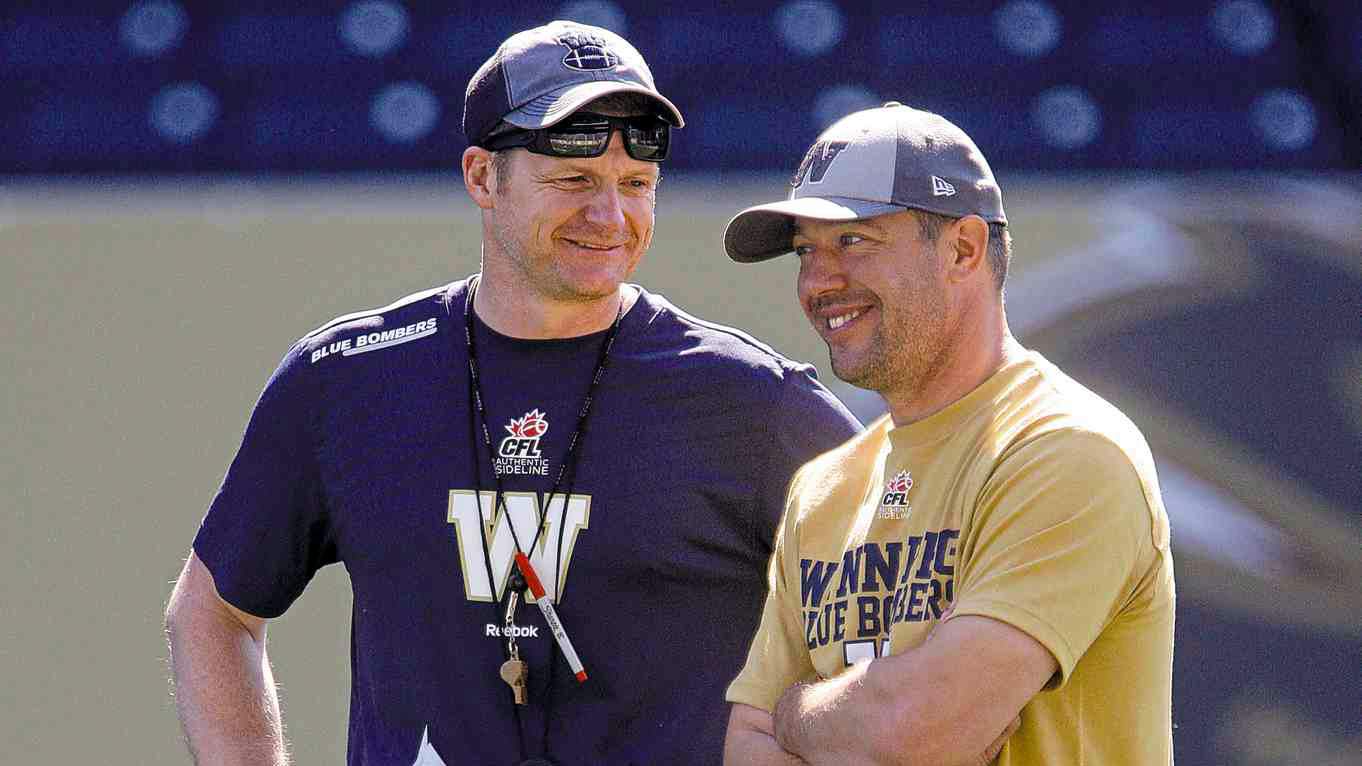 JOE BRYKSA / WINNIPEG FREE PRESS files Head coach Mike OÕShea (left) and GM Kyle Walters will have their fingerprints all over this seasonÕs edition of the Blue.

Wow. What a crazy 48-hours for the organization and its fans.

First of all, what a great atmosphere and win Saturday afternoon. From all accounts, the energy around Investors Group Field was top notch, and I’m glad the team was able to deliver. It was one of those days though, where as much as the win was enjoyable, a few of us had some very important pending news on the horizon, and it was certainly on my mind throughout the day and into the evening.

This might be the biggest trade this franchise has made in over a decade, in my opinion.

General Manager Kyle Walters had mentioned numerous times, even dating back to last season, that the Toronto Argonauts wanted Drew Willy. But last Tuesday was the first time he had a more serious look of resolve on his face when he walked into my office doorway and said, “Toronto is getting serious here.” Even still, I knew we weren’t going to part with Drew for anything less than a small fortune, and even still, this organization would not put itself in a position of being without an experienced backup quarterback, especially as we fight to the finish line for a playoff spot. As the week went on, there was no real commitment from our end, but the two crucial elements were these; TJ Heath and their first round pick. We weren’t making this trade without both of those.

On Saturday morning – game day – we met around 11:00 a.m., and it was confirmed that, barring any injuries in the game, Kyle would call Montreal in the morning and acquire Kevin Glenn (it appeared this would be a relatively smooth transaction), then we would execute the trade with Toronto, with the addition of a third round pick. We got through the game healthy, and Kyle sent a text to head therapist Al Couture around 6:00 p.m. Saturday evening, just to confirm.

We were getting closer.

The next step was to call Montreal, which Kyle did early Sunday morning, and as he neared my doorway with his phone held to his ear, Jim Popp on the other line, he gave me the thumbs up. Kevin Glenn was available and coming to Winnipeg, pending Toronto’s game. Sunday afternoon, we all huddled downstairs and watched the Toronto-Hamilton game.

Again, assuming TJ Heath made it out healthy, it was a go on all ends. As he picked off his second pass of the game and his fifth of the season, smiles began spreading across the room, and although nobody really said a word, it was good to see.

Once the Argos game was over, the PR groups on both teams, who had been prepared for this all day, began to line up the announcements. Here is the issue with trades; you want to make sure all players have been told before you ever announce anything. This applies to any transaction.

I got the text from Toronto’s PR boss that Heath had been informed, and I quickly called Coach O’Shea, who had driven to Drew’s house to deliver the news in person. I knew this would be a tough moment for both of them, but I also was up against the clock, as media were still in the Argos locker room when Heath returned and began informing his teammates he was leaving.

Fortunately, Coach had just walked out the door of Drew’s home and answered his phone by simply saying “yes, he knows.” It wasn’t the time to ask him how it went, and I could tell in his voice it had been emotional on both sides, but those details are not for me to share. By 7:25 p.m., we had begun to roll out the news and details through bluebombers.com, including Bombers’ web writer Ed Tait’s article with included a chat with GM Walters that took place midway through the third quarter of the Argos game.

It was a hectic night, and it’s always hard to see someone you worked so closely with leave abruptly for a new team. But that’s the reality of pro sports, even if saying that really doesn’t make it any easier.

Kevin and TJ arrived here late last night (TJ a little later, as his Uber driver in Toronto somehow took him to the wrong airport….). But both seem very excited to join our organization.

And as we all know, we will see Drew back in Winnipeg Saturday afternoon at 1:00 p.m. While the Argos have announced that he won’t be starting, he will be dressing.

Though Drew may have had a rough go at the end here in Winnipeg, take it from someone who spent every day with him for almost three seasons; the guy loved this city. He did a lot – and I’ll let you read between the lines – in order to play through injuries and try to help us win ball games. I hope we all show him some appreciation for that on Saturday. And then… well, I hope we beat them.

Talk to you soon.