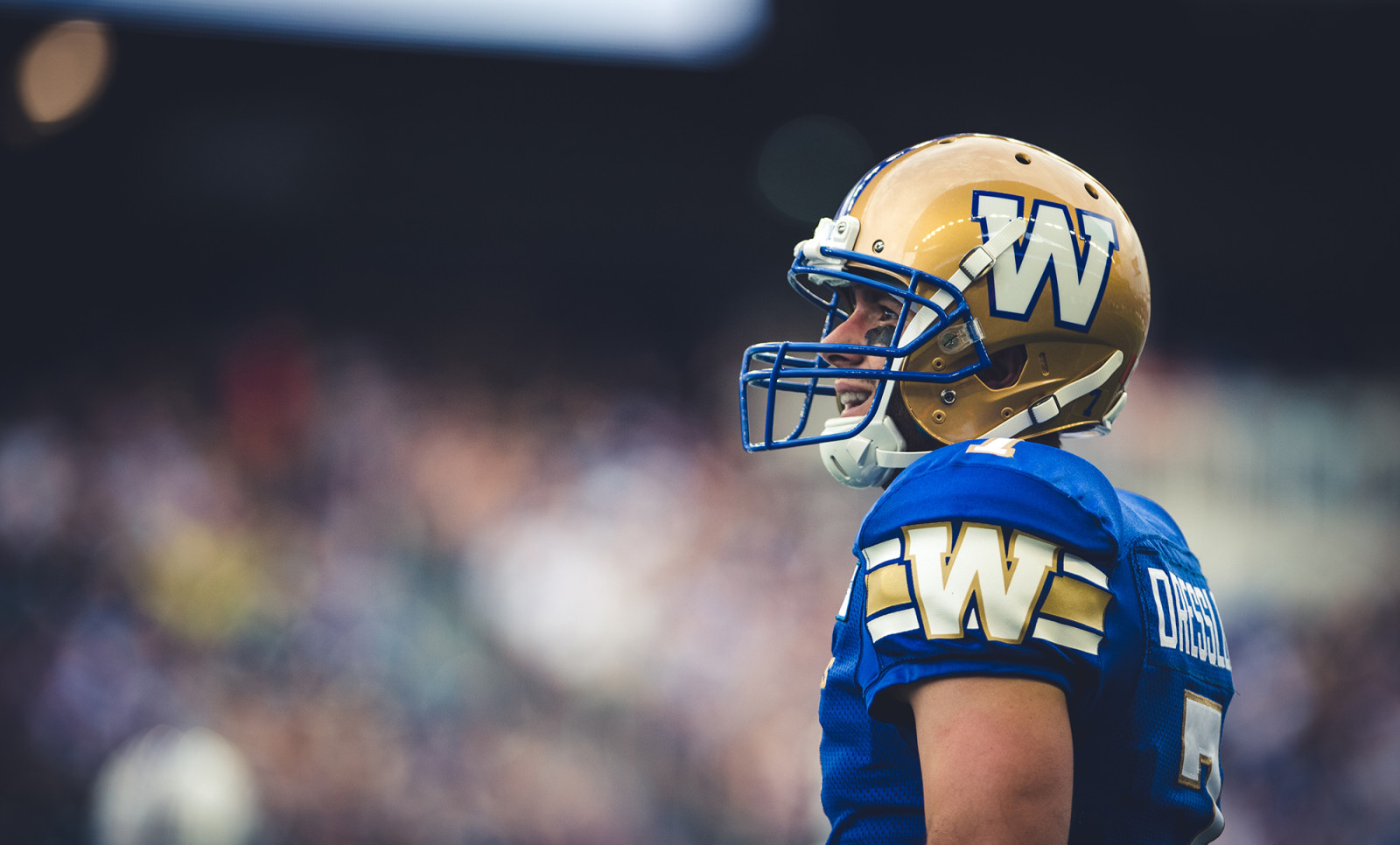 Weston Dressler (7) of the Winnipeg Blue Bombers during the game against the Montreal Alouettes at Investors Group Field in Winnipeg, MB. on Friday, June 24, 2016. (Photo: Johany Jutras)

He spent eight years of his CFL career in green and white, playing football, adopting the city as his home, and even meeting his fiancé in Regina. He’s no stranger to the Labour Day Classic at Mosaic Field.

But now, things are different. He finds himself playing in the final Labour Day Classic at the old Mosaic Field on the other side of the rivalry – in blue and gold.

Here is Weston Dressler, in his own words, on returning to Regina for the first time as a Bomber:

It’s not exactly going to surprise anyone when I say this Labour Day Classic is one I’ve thought a lot about in the offseason.

It will be a lot different. And I’m OK with that.

I spent eight seasons as a Saskatchewan Roughrider, and Regina and that whole province grew on me. It was a perfect fit for me at the time. It was so close to home, so similar to North Dakota and my hometown.

I signed my first contract with the Riders in May of 2008. I actually signed it at UND, where I played, got all the paperwork faxed back and forth and then being as close as I was, I drove up a couple of days before training camp.

I pulled into the stadium, Taylor Field. It was my first stop because I really didn’t know where else to go and it’s amazing now when I look back how important that place became in my life.

But as my first year went by, I really started to appreciate the CFL and the Roughriders and their fans more and more. I remember throughout that first training camp walking off after practice and talking to fans every day. You’d sign autographs and fans would be telling me how crazy Rider fans were and how awesome the CFL is and how much I was going to love the game. There were some days, especially during camp, when you just wanted to dive into the cold tub and get out of there. But after a while all I could think was, ‘This is pretty cool.’ And then the more you play, the more you learn about the league and the more I learned to love it. It was important for me as a rookie, and still to this day, to try and have those interactions with fans. It’s such a big part of this league. But it also helped me to feel a part of something.

One of the first things I’m going to do when we get there on Saturday is go to my house. We still have a place there. My fiancée is there right now and, oddly enough, Rob Bagg and his family are renting out our place throughout the season.

We’ve got dinner plans that night. But dealing with the possible extra attention on Saturday might be the toughest part of the weekend. I’ve always been a personal guy when it comes to talking to fans and signing autographs, but I’ve got to be careful this time. I’ll be honest: it might be more attention than I like. I’ll try to take care of some of that after the game.

On game day… man. That’s going to be really different, for sure.

I’ll be running out of a different tunnel and I’m going to have to make sure I don’t run into the wrong locker room right away. Football players are creatures of habit and I’m sure some old habits might creep in there.

Having played in Grey Cup games and playoff games, the first series is generally when it starts to feel like football again. The warm-up, the anthem leading up to that first play is when you get all those butterflies and different emotions. I’m anticipating that to be a long, long warm-up for me. Once it starts, I’ll be good to go and be able to check in.

But after my release from the Riders and then talking right away with different people with the Bombers, it was pretty clear where I should be and where I wanted to be.

It felt right from the get-go.

And when we had that three-day mini camp in April, that’s when I really felt good about my decision. That’s when I knew this was going to be a good fit. The organization and the way they’re doing things now is something I’m enjoying being a part of. I like things about both organizations. I have a different viewpoint on that. Everyone is going to have different opinions, but if they don’t like that fact, then sorry.

I loved my eight years there and I’m thoroughly enjoying my time here with the Bombers now and hoping to make something special with it.

The other day Darren Cameron, our media relations guy, asked me if I had any special Labour Day memories. I really didn’t have anything off the top of my head. Sure, I remember all the Labour Day Classic games and all the things that happened, but there wasn’t any one thing that stuck out for me when he asked me that question.

The more I think about it now, the more I believe this is it.

This is going to be the one special memory I have of Labour Day.

It’s the last one at Mosaic and it’s going to be totally different than the first eight I played in over the years.