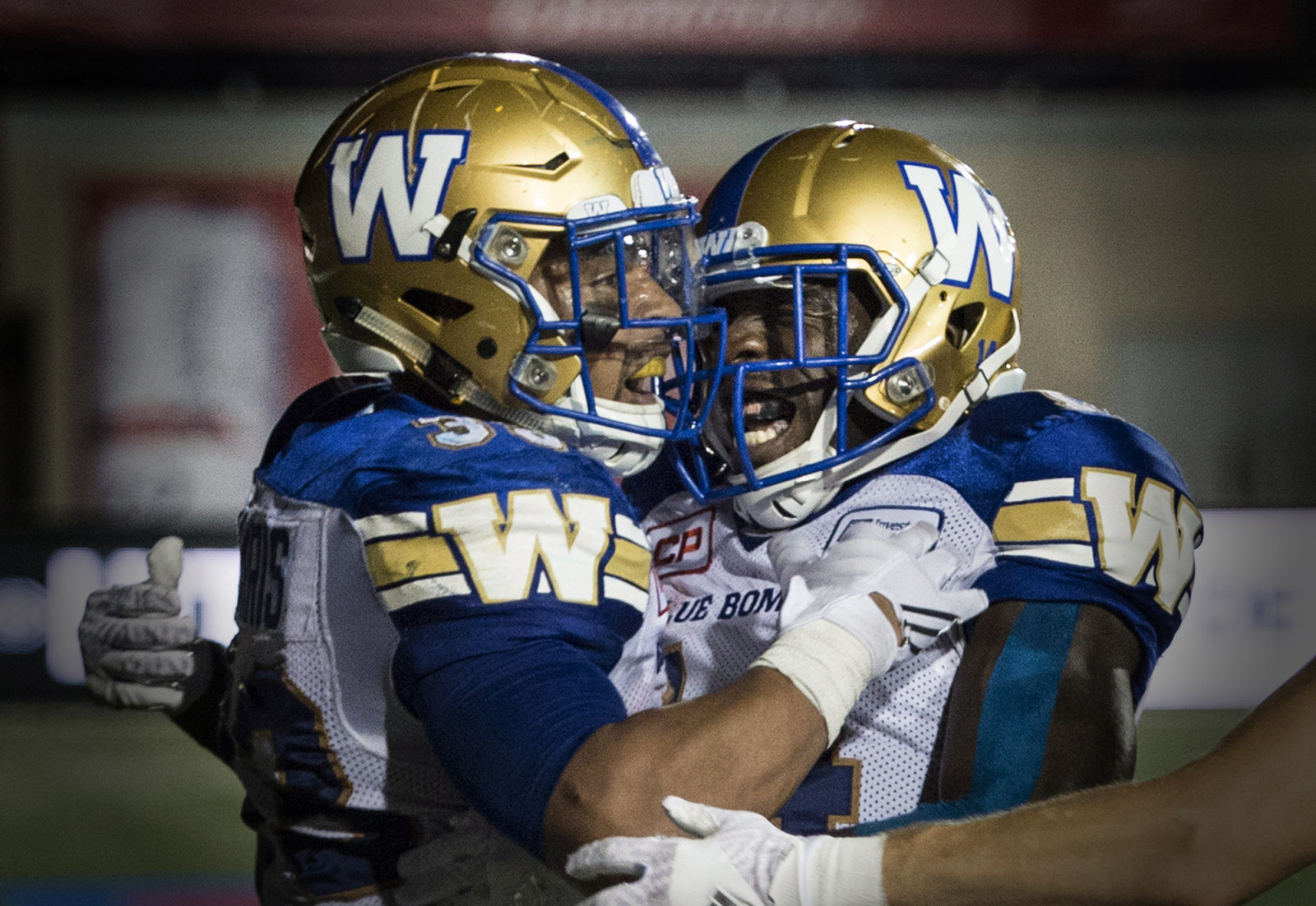 MONTREAL – They stood in the centre of the ring and traded punches. Body shots… crosses… hooks… upper-cuts…

And by game’s end, the Winnipeg Blue Bombers had their collective arms raised after a 32-18 slugfest victory over the Montreal Alouettes at Percival Molson Stadium that not only extended their win streak to four games, but spoke immensely of where this team is at and hinted at where it could take this thing.

“We’re bringing it all together, man,” said Bombers left tackle Stanley Bryant. “Special teams, offence, defence… we’re a team and we’re growing each and every week.”

“If we keep doing this, the sky’s the limit.”

Playing against a Als side that has its share of offensive weapons – they put up 43 points against Ottawa a week ago – and is led by a wrecking ball defence, the Bombers shut out Montreal in the second half, forced another half-dozen turnovers, and got six field goals from the most accurate kicker in Canadian Football League history in Justin Medlock to improve to 5-4.

They also overcame a 15-9 second quarter deficit, survived despite taking 15 penalties for 151 yards and losing the time of possession battle.

So, textbook it wasn’t. But it did follow a template the Bombers have shown during this recent run: efficient QB play from Matt Nichols, superb placekicking from Medlock – his run of 20 straight is, unofficially, a club record – dominant play at the line of scrimmage, and a defensive unit that is fast becoming a nightmare for any attack.

“It’s so much fun out there. So much fun,” said Maurice Leggett, who picked off his fifth interception – and returned it for his third touchdown of the season – in the second quarter.

“Those are all stats I don’t pay attention to,” said Bombers head coach Mike O’Shea. “I’m pretty excited about the win we just got. But I’m asking the players not to feel satisfied so I can never feel satisfied.

Medlock’s brilliance aside, the Bombers got touchdowns from Leggett and a 19-yard run by Andrew Harris. The Harris score was the killer punch for the Bombers, who took possession at their own 17-yard line with 6:43 remaining and up 22-18, and then drove 93 yards on nine plays – helped by 25 yards of penalties by John Bowman – while chewing up four minutes and 37 seconds of clock.

It also allowed Harris to make up for putting the ball on the ground twice earlier, his first two turnovers of the season.

“It was definitely frustrating. It was a dogfight out there,” said Harris. “I had a feeling we were going to end it on a run play, just the way our O-line was playing and the way we were playing on defence. It was able to redeem myself and make a big play for my team, but I couldn’t have done it without the guys in front of me and the receivers making blocks downfield.

“Even when I first fumbled the guys were like, ‘You’re good… you’re good. Don’t worry about it. We got you, we got you.’ That just showed the confidence they have in me and the confidence I have in them. This team is building around each other and we’re playing great football when we need to.”

Harris finished with 70 yards on 16 carries and chipped in another 61 yards on five receptions. And while Kevin Glenn struggled – he was picked four times by Leggett, Justin Cole, Taylor Loffler and Khalil Bass – Nichols played a clean game by completing 23 of 30 for 220 yards with no mistakes.

“That was a tight game and the way it was playing out we knew we were going to have to go on a game-winning drive and score a touchdown to win,” said Nichols. “These guys did a great job. We did a good job running the ball and getting some good yards on first down, a couple of good completions, nice catches.

“It was kind of a struggle all game. We couldn’t get out of our own way sometimes taking penalties that took back some big plays. We had some misalignments… we just need to do, overall, a better job as an offence in finishing off some of those drives. It says a lot about this team to put a drive together like that when we needed to and, obviously, Andrew had an incredible run for a touchdown.

“It speaks of this team’s preparation,” added Nichols. “It’s never easy to win in this league, especially on the road. Guys are keeping their focus and understand that each and every week it’s going to be a battle. We’re putting in the time right now as a team holding each other accountable, watching extra film and coming out and being physical each and every day.

“This team is just riding a lot of confidence right now. The next game can’t come soon enough.”

6/33: The Bombers forced six more Alouette turnovers – four interceptions, one fumble once on downs – and now have 33 at the midway point of the season. Just to put that number in perspective, Winnipeg had 38 takeaways all of last year.

The Bombers now have four games this season with six turnovers.

“It may not look like that again next time but so far it’s been pretty good,” said O’Shea. “Let’s just keep on telling them they can’t do it and maybe they’ll keep doing it.”

The Bombers are now 4-1 vs. the East, including a pair of victories over Hamilton and W’s over Toronto and now Montreal.

6-5: Matt Nichols record as a starter in Winnipeg, including 4-0 this year.

12: Interceptions by the Bombers in their last three games, all wins.

6: Field goals by Justin Medlock on the night; pushing his consecutive streak to 20. Unofficially – the league was double-checking tonight – that’s a Bomber record.

7: The Bombers record for most field goals in a game, set Oct. 11, 1981 by Trevor Kennerd in a game against Toronto.

“It’s three? I lost count. I just go out there and play, man, and keep making plays. And little brother Fogg… he’s not. I think he’s jealous.” – Bomber linebacker Maurice Leggett on his fifth interception, and third returned for a TD. Leggett and Fogg have a friendly interception total battle going, FYI.