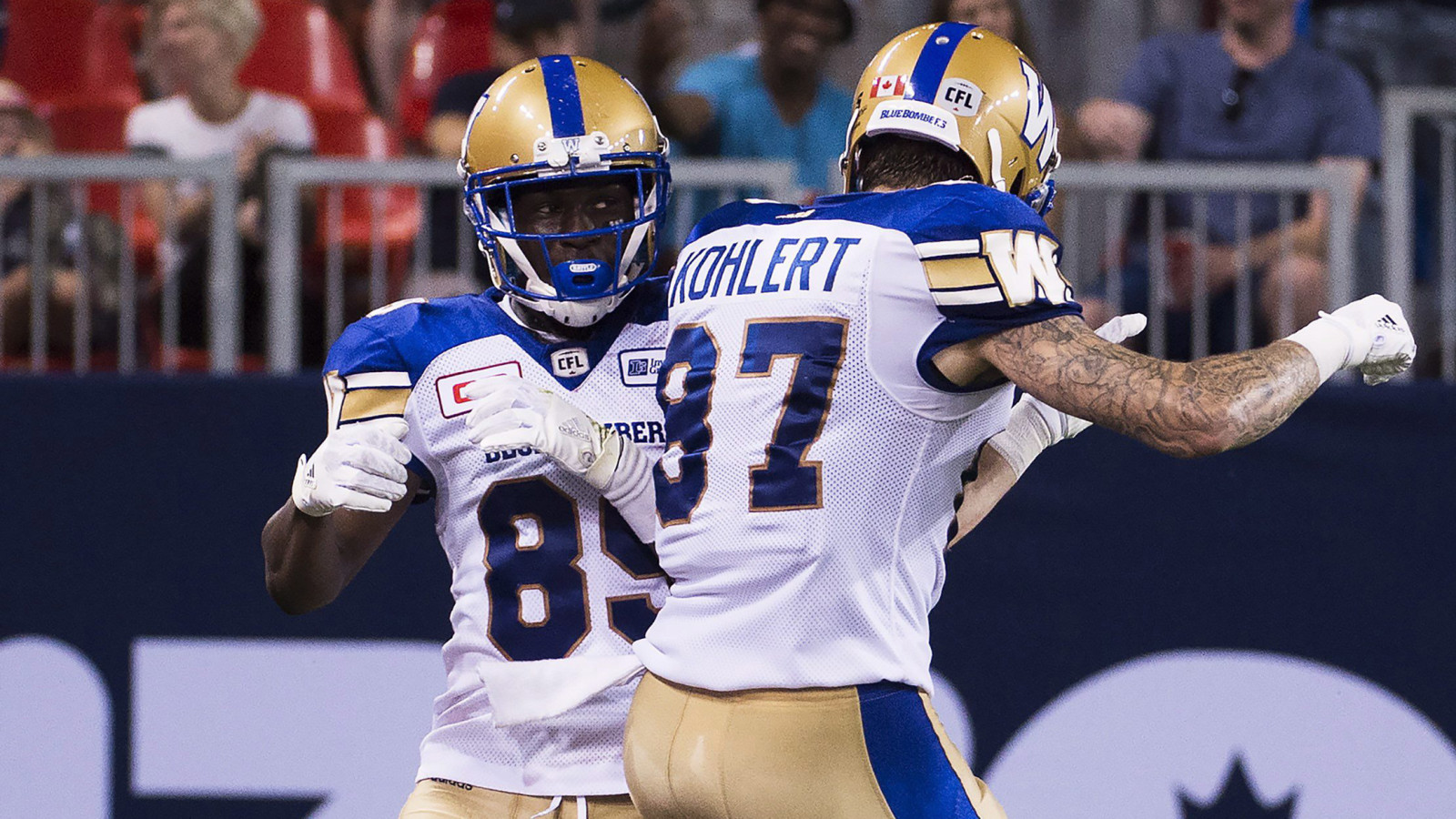 TORONTO – Somehow, given all the wacky plotlines the Winnipeg Blue Bombers season is already serving up two months into the campaign, the following makes perfect sense:

A franchise now led by its no. 2 quarterback, decimated by injuries, and given up for dead three weeks ago is now enjoying a rebirth led by a guy they kicked to the curb in March and a who-are-these-guys secondary missing four starters.

The Bombers, in a story that would likely be rejected by Hollywood for being too far-fetched but is now being played out in front everyone’s eyes, cranked out their third straight victory Friday night in a 34-17 win over the Toronto Argonauts in front of an announced crowd of 15,063 at BMO Field.

The win improves the team to 4-4 heading into its first bye week of the season.

“This is about making the city of Winnipeg proud of us again,” said Bombers defensive tackle Euclid Cummings, who joined the club after spending last year with the Argos.

“This feels amazing to come back here and get a win with the guys. Three straight man, it feels great.”

Cummings was part of a defensive crew that turned six turnovers into 24 points, including a 98-yard interception return for a score by Maurice Leggett, who also had a second, along with two picks by Kevin Fogg and one by Khalil Bass.

And offensively, Clarence Denmark – who returned to the club just a couple weeks ago after injuries to Weston Dressler, Ryan Smith and Darvin Adams – scored twice on passes from Matt Nichols while Andrew Harris crashed for 123 yards and a TD.

“The message is this a good football team that we played tonight and winning is not easy,” said Bombers head coach Mike O’Shea when asked what message he gave to the team heading into the week of rest. “Enjoy it. You’ve got to enjoy it.”

But the result didn’t come easily at first. The Bombers trailed 10-3 at the end of the first quarter before reeling off 31 straight points, showcasing a foot-to-the-throat instinct that has been long missing.

“We came into the locker room at halftime and all talked about how we wanted to feel when this game was over,” said Nichols. “We went out there and played a good half against a very good football team. It showed a lot about this team and I’m proud of the guys.

“We were struggling in the first half as an offence and you look up and the score is only 10-6 (for the Argos) and as an offensive unit you felt like you were down by three touchdowns. But the defence kept taking the ball away for us and putting us in good field position.”

Among the many who jumped off the page was Fogg, who came north to the Bombers after stints with the Miami Dolphins and Pittsburgh Steelers. Fogg finished the night with the two picks, a quarterback sack, a fumble recovery and 118 combined yards on punt and kickoff returns.

“I haven’t played since last preseason so, honestly, I was ready to go on a team, I was ready to get back on a field and just have fun,” said Fogg. “It was hard going through that process, but God kept me peaceful and confident in knowing I was going to have another opportunity.

“I’m glad to be up here and just to be playing.”

“Once he learns a few more nuances of the CFL and the Canadian game he’ll be a household name,” added O’Shea of Fogg. “He is already. He’s electric, he finds the ball… he had two interceptions, a fumble recovery and a sack. Plus, we’ve ran his butt out on the return game, too, and me manages to get a lot of yards there as well. I think he’s having fun.”

The Bombers three-win streak gets them to .500 but the same vets who said fans should pump the brakes on the panic when this team was 1-4, are now insisting this bunch is just beginning to flash its potential.

“We’ve been playing relentless,” said Harris. “We really believe in the guys in the room here and we didn’t let the naysayers and negativity creep into our locker room.

“It’s just football. It’s smash mouth. It’s being the hammer, not the nail… all those clichés. We’re really standing true to who we want to be and it’s been amazing to see it unfold.”

24: Points off turnovers by the Bombers Friday night. The Bombers picked off Logan Kilgore five times and also recovered a fumble in finishing +4 in the turnover ratio.

The Bombers last had five interceptions in a game on Oct. 5, 2001 vs. Edmonton.

8: Passing yards for Matt Nichols & Co. in the first quarter.

246: Passing yards by game’s end for Nichols, including two TDs to Clarence Denmark.

90: The number of pass attempts by Nichols this season before he was intercepted for the first time. Thomas Gordon stepped in front of an errant throw in the second quarter to end the streak.

14: Consecutive field goals by Winnipeg’s Justin Medlock, after makes of 49 and 45 yards against the Argos.

27: Turnovers forced by the Bombers through eight games this season. The club had all of 42 a year ago.

“We’ve started to learn what it’s going to take to win and that’s a good thing, that kind of knowledge. I like how we came out at the half. I thought the first half was kind of hit and miss. We did a good enough job, although we lost the time of possession… but we certainly didn’t give up those killer points. And when they came out I thought they had a different resolve in the second half.

“I didn’t say a lot. The players are starting to run that themselves, which is the ideal situation.” – Bombers head coach Mike O’Shea.