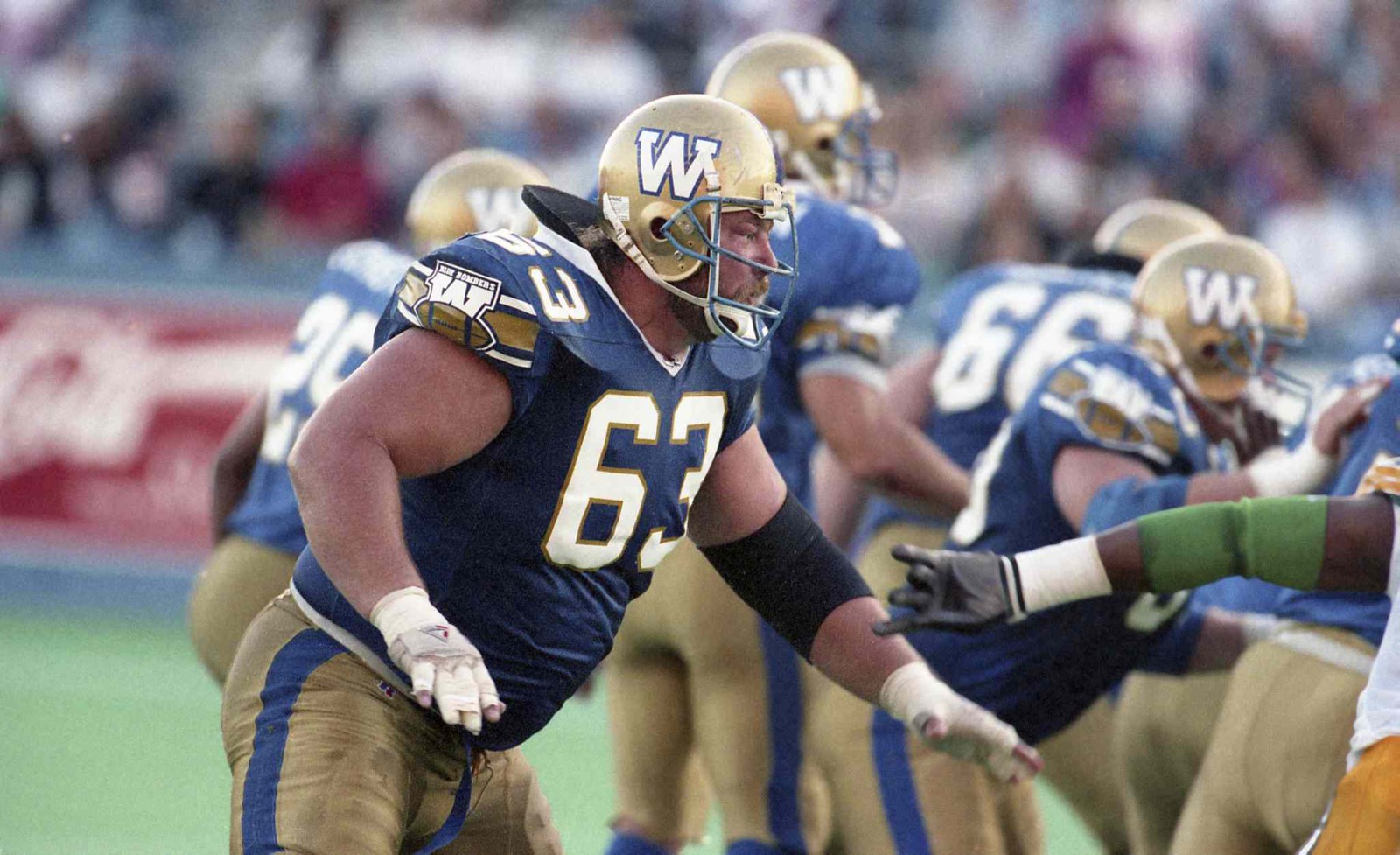 Veteran Winnipeg sportscaster Joe Pascucci, inducted into the media wing of the Canadian Football Hall of Fame last fall, writes weekly on the Bombers past and present.

It’s hard to comprehend now, but the Blue Bombers actually passed on their first chance to get Chris Walby, a player many believe is the greatest offensive lineman in Canadian Football League history, and the first legend to have his name placed on the Bombers’ Ring of Honour at this week’s home opener.

The year was 1981, and the homegrown product had just concluded his All-American career as a defensive tackle at Dickinson State University in North Dakota.

Walby, then 24, was well-known to the Bombers and, in particular, assistant general manager Paul Robson. But heading into the draft that year, the team had a choice to make as to which local player they would claim as their “Territorial Exemption” pick.

The decision, as Robson remembers it, came down to Walby and Perry Kuras, an offensive lineman from the University of North Dakota. Head coach Ray Jauch wanted to know who was the better athlete.

Robson poured over the data.

“Based on all the statistics that were there, the best athlete was Perry Kuras,” said Robson. “The question should have been ‘who has the best potential’.”

So it was Kuras that the Bombers chose to protect, leaving Walby up for grabs. The Montreal Alouettes would scoop him up with the 4th overall selection.

“I very quickly realized I had made a huge mistake and that I was going to do everything in my power to get him back to Winnipeg,” Robson said.

His chance came early that season. Alouettes general manager Bob Geary was constantly playing with Walby’s spot on the Alouettes roster, at times putting him on waivers with recall, or cutting him outright.

“Obviously they were paying him or he would have taken off”, explained Robson.

But what Paul was unaware of was that Geary had tried to pick Walby’s pocket by not paying him his full weekly salary. He was being waived, but was still practicing with the team, and when he opened his pay envelope it had only half the money he was expecting.

Puzzled, Walby went to Geary. He was told that since he was on the taxi squad, he wasn’t entitled to receive his full paycheck. Walby went to the club’s union representative and was set straight – Geary was wrong because he had been put on the reserve list. Walby went back to the GM’s office and Geary would blame his secretary for the mix up.

The whole song-and-dance left Walby with a bad taste in his mouth.

Robson had heard through the grapevine that Walby wasn’t happy and sensed an opportunity.

“But I knew if we claimed him we’d never see him,” said Robson.

What happened next was a managerial equivalent of an end around. Robson called Walby’s family home here in Winnipeg.

“His sister answered the phone and I said, ‘I’m sorry to hear that Chris got cut by the Alouettes,’” said Robson.

And Robson has never forgotten her reaction.

“She went, ‘Whaaaaaaaat?!!!’  I told her I was sorry for the bad news, but if you’re talking to Chris, tell him there’s a ticket at the Montreal airport,” said Robson. “Come back to Winnipeg and I guarantee you he’ll be in uniform for the next home game.”

Walby’s father phoned his son to inform him of what the Alouettes had done and what Robson had promised.  Walby then contacted Robson, who told him that he was without a contract and a free agent.

But Walby was still torn about what he should do.

“So I sat up all night talking to Tim Kist and some of the other guys that I played with,” Walby recalled. “I liked it in Montreal. The guys were great, I liked my teammates, I liked my roommates, but I also had that bad taste in my mouth as to how I was handled.

“I remember I slept on it all night and got up in the morning, packed my bag as quick as possible so I wouldn’t change my mind and took a cab to the airport.”

Waiting for Walby in Winnipeg was Robson, and within 30 minutes of getting off the plane, Walby was putting his name on a contract.

“I wasn’t going to make that mistake again!” said Robson with a laugh.

“Later that morning, Alouettes coach Jim Eddy called my parents and started ripping them,” added Walby. “He was talking about how badly they had raised their son, that there was no loyalty. He lambasted me about the lack of character I had.  Perhaps I could have handled it better. I could have gone to Jim Eddy and it probably would have been worked out.”

Walby would make his return to Montreal late in the ’81 season and it’s a game he will never forget.

“I was playing tight end and had to block Junior Ah You and he says, ‘If you block me, I kill you!’ I think I wet my pants because I was seriously terrified of the guy.  He had the darkest eyes and I’d seen him in the locker room doing his war dance before the games.

“He was just a legend to me. The guy was a big, strong Samoan.”

Walby not only blocked Ah You, late in the game he recovered an Alouettes’ fumble in the end zone for the only touchdown of his 16-year career with the Bombers.

Walby may have started his playing days as a defensive lineman, but it was a decision by assistant coach Ellis Rainsberger that helped turn him into a Hall of Fame offensive lineman. It was Rainsberger who first moved Walby to the offensive line, as the team’s right guard in 1982 and 1983, before John Gregory moved him to right tackle in 1984.

Walby was inducted into the Canadian Football Hall of Fame in 2003, and in 2009 had the honour of presenting former Alouettes teammate Glen Weir with his Hall of Fame ring at a ceremony here in Winnipeg.

During his induction, Weir said that the biggest mistake Montreal ever made was letting Walby go.