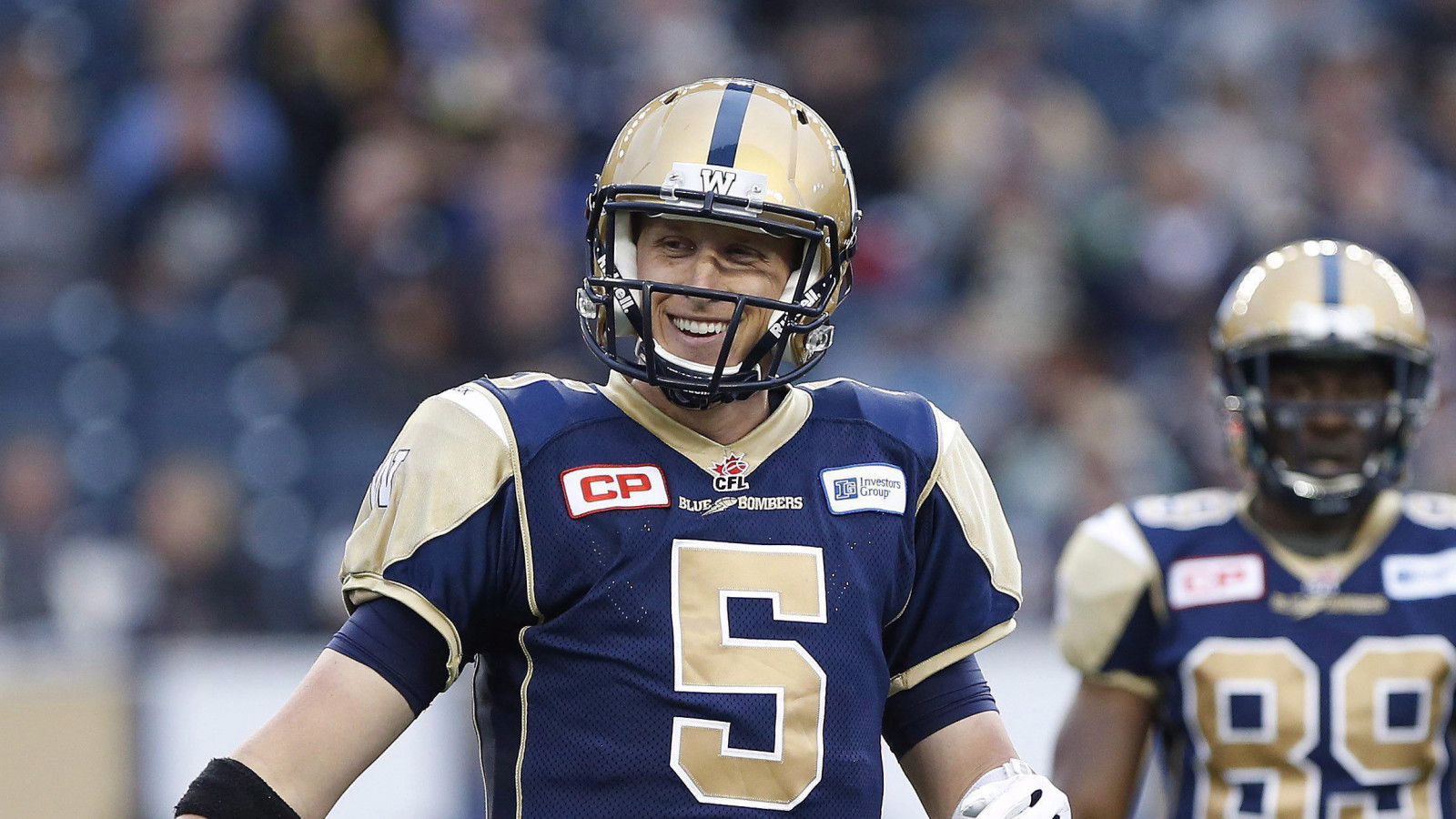 Winnipeg Blue Bombers quarterback Drew Willy (5) smiles after a play against the Hamilton Tiger-Cats during the first half of CFL action in Winnipeg Friday, June 19, 2015. THE CANADIAN PRESS/John Woods

There’s no way to sugarcoat the numbers or find some sort of silver lining. So Wade Miller, Kyle Walters, Mike O’Shea and the rest of the Winnipeg Blue Bombers football brain trust won’t even make the attempt.

Any organization that has missed the playoffs in four straight seasons and has just one winning campaign in the last eight is completely aware it is under the microscope, with its every move magnified x 100.

All that said, after a busy offseason in which the club was a big-time player in free agency – adding the likes of Andrew Harris, Weston Dressler, Ryan Smith, Justin Medlock, Keith Shologan and Euclid Cummings – there is a sense of quiet optimism in Bomberland.

“It’s a work in progress,” said Bombers GM Kyle Walters on the club’s annual season preview conference call with the national media. “When you look at the depth chart now versus two years ago, there has been a massive turnover.

“As much as you’d like to think things could be fixed overnight, you build and you improve and you overhaul your Canadians and you draft and develop… I would like to think we’ve been building for a couple of years and gradually getting our roster better.

“I feel that, yes, our roster now is stronger than it was two years ago and it’s stronger now than it was last year because of the process of developing our young guys and finding players in scouting and using free agency to augment it.

“We’re optimistic of the changes we’ve made, and we’re happy with the guys coming in that are going to make us better,” added Walters. “But we’ll see in a few weeks.”

The Bombers hope to bust out of the starting gates early, even if the schedule is nasty to open the season. Winnipeg opens at home to Montreal and then has two games each against Calgary, Hamilton and Edmonton before visiting Toronto just before their bye week in mid-August.

O’Shea and his staff, like all of their Canadian Football League rivals, won’t have much time to piece this whole thing together before the curtain lifts on the season. The Bombers open rookie camp next Wednesday, main camp on May 29th, and then play their first exhibition game at home against the Montreal Alouettes on June 8th.

The games start for real 16 days after that with the 2016 regular season opener at home, also against the Als.

“With all these acquisitions that we’ve made in the offseason one of the things I always think about is how we get them to gel quicker,” said O’Shea when asked what the major question marks are for the team heading into training camp. “We want to make sure this group, once we leave training camp, is working together as a team and with some new faces sometimes that can be a challenge.

“But with the guys that we’ve brought in I really think this won’t be a problem. We’ve got some very talented veteran players that are just great character guys, too, in the locker room.”

The additions will be critical to an improvement in 2016, but vital to a turnaround is keeping quarterback Drew Willy upright and healthy for an entire season.

The Bombers were 3-4 when his season ended last year and are just 2-10 in games he has missed over the last two campaigns because of injury.

Asked if he had concerns about Willy’s injuries the last two years and whether the club may have to go in another direction at the QB position should he be hurt again, O’Shea said:

“I don’t look as injuries as all adding up, I look at things as distinct events. I always believe the players are going to stay healthy and if that isn’t the case, then you deal with it then.

“We’ve done a good job of making sure we’ve got Matt Nichols locked up for this season. So, we have a better insurance policy there, that’s for sure.

“I have full confidence that Drew’s going to play the entire season for us. I always think that way.

Some of the other notable sound bites and items from Tuesday’s conference call: