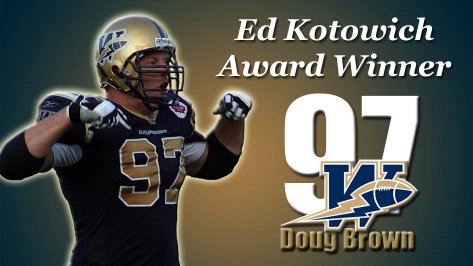 Brown has been a mainstay on the Bombers’ defensive line since 2001 following a four-year stint in the NFL.  In his career, Brown has donated tons of time to various organizations and charities throughout the city of Winnipeg including Variety – Children’s Charity of Manitoba and the Humane Society of Winnipeg.  Brown has also participated in many Blue Bomber appearances with the I Love to Read program at various schools and has done public speaking events throughout the province of Manitoba for many years.

“Giving back to the community that employs you and allows you to represent it is nothing one should receive an award for,” says Brown, “but it is an honour to be recognized under the same light as Ed Kotowich and all the previous recipients.”

The award honours Ed Kotowich – a former offensive lineman for Winnipeg from 1955-1961.  He played in three Grey Cup games during that time (1958, ’59, ’61) and earned individual recognition as a Western All-Star and as a recipient of the Tommy Lumsden Award as the Bombers’ Outstanding Canadian Player.

After retiring as a player, Kotowich worked with the Winnipeg Rods as an offensive line coach and later with minor football programs at Winakwa and Windsor Park Community Clubs.  He also served as an alderman for the city of St. Boniface between 1968 and 1977 and worked on a number of community boards including the St. Boniface Parks Board, the St. Boniface Museum and the Knights of Columbus.  He was also an ardent supporter of the Festival du Voyageur and the Boni-Vital pool complex.